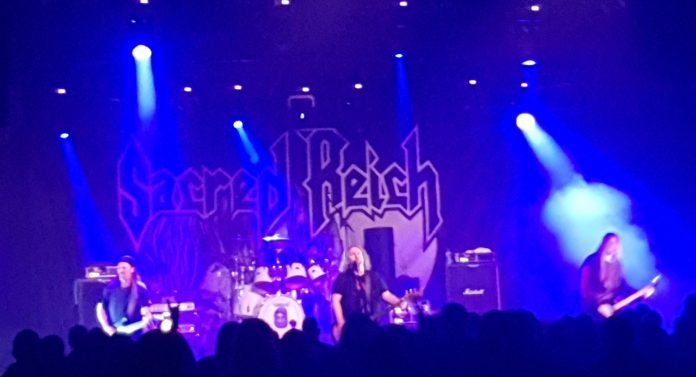 If the name doesn’t give it away, then this will. Affording themselves a kind of encore after “Darkness Remains”, Night Demon frontman Jarvis Leatherby steps to the mic: “This is our 600th show” he says. “And we’ve been waiting to get to the home of heavy metal…..”. Look, this venue is owned by KK Downing and Priest memorabilia adorns the walls, so pretty much it’s in the contract for metal bands to say this. In fairness, though, few bands do it with as much authenticity or evident love as Night Demon. The three piece believe that the worlds ails can be cured by a headbang – and who knows, maybe they can? When they lock into a groove as they do often, it’s hard to argue. “Full Speed Ahead” is more than a song here, it’s a mission statement. “The Howling Man” is glorious, proper metal, that applies to “Curse Of The Damned” too. Nothing sums the Californians up better than this. In “Chalice” a bloke appears in a mask, cavorting about with what looks from where I am to be a can of beer. The presence of their version of Eddie The Head is never explained. It doesn’t need to be. They’re Night Demon. And they, you best believe, are heavy metal. 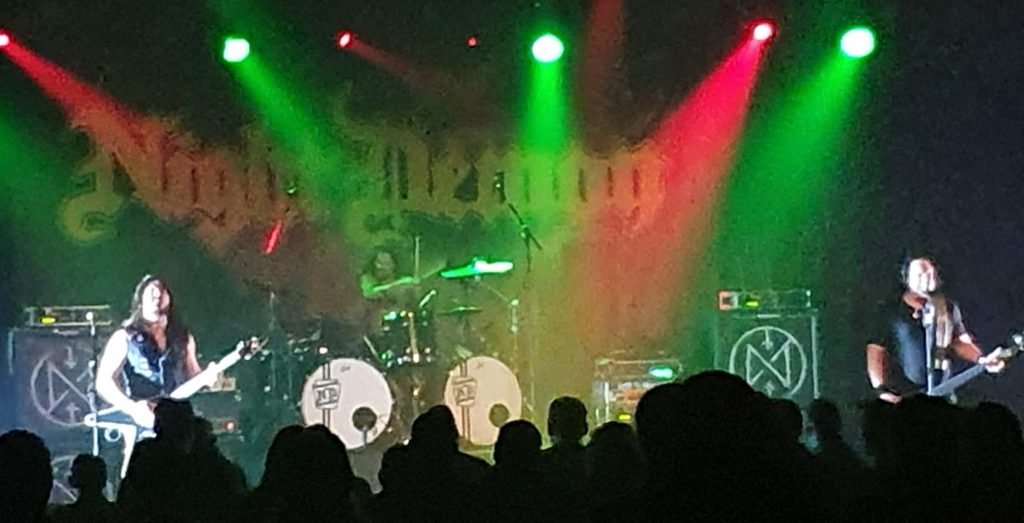 Here’s the thing. Sacred Reich appear after “The Boys Are Back In Town”. Not only does that prove that even thrash bands know Thin Lizzy rule, it rather makes the point they are back, back, back.

Earlier this year, they stuck out “Awakening” their first album in 23 years and it was astonishing, but, as singer Phil Rind – one of two here who appeared on all their albums, along with Wiley Arnett – acknowledges, there’s an issue.

“I went to see Black Sabbath” in the Dio era,” he smiles (Phil smiles a lot) and the intro tape started…..then they played a new song and it’s like “ahhhhh, man…. So I hope none of you are disappointed tonight!”

When he says this, they’ve done two songs already. “Divide And Conquer”, and “The American Way.” That really is the night in a nutshell. One new, one old, both brilliant.

See, that’s the point with “Deliverance”, it stayed true to the Sacred sound, but sounded as fresh as a daisy. The best thrash record of the year by an absolute mile, they set about proving it with “Manifest Reality”.

This mix of new and old is in the band too. Joining Rind and Arnett are Dave McLain (“he had a 23 year break in Machine Head….” Explains the frontman) but young guitarist Joey Radziwill has injected something too, into ones like “Crimes Against Humanity” and the brilliant “Who’s To Blame” that I listened to as a 14 year old kid thinking “why aren’t these massive?”. I’m in my mid 40s now and I still ask that question.

Towards the end of the set they dip back right to the start and “Ignorance” the title track of their debut – now staggeringly over 30 years old – is so typical of what they still do: thrash metal with a social conscience, but if you just wanna bang your head for a bit  and get in the pit, then you can forget the lyrics if you like.

Wonderfully, there’s no encore. Instead, they stay onstage with their people and play “Killing Machine” (“Dave’s favourite song from the new record, I hope one day it’ll be yours too”) before oldies “Death Squad” and the punk infused “Surf Nicaragua”, which takes me personally back, because it was reading a review of that EP in Kerrang! Where I first heard of the band, and actually first got into thrash metal.

After doing the usual group introductions, Rind says simply: “And my name’s Phil, and I am just happy to be here….”

It showed. And it was worth the wait.