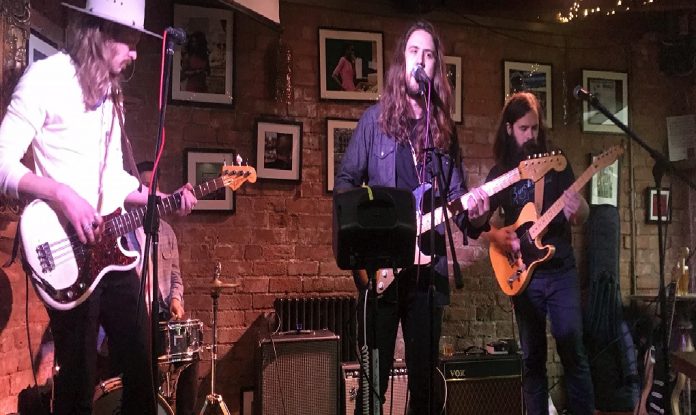 Sam Morrow might have three albums of his own, but he is clearly proud to wear his influences on his sleeve.

As such, he plays a few covers tonight and three of them, in particular are instructive.

First, he says “this is one of the bands dad introduced me to, and I still love them to this day” and Morrow and his three band mates find something new to say in ZZ Top’s copper bottomed genius “Sharp Dressed Man”.

Then they starts the second set with an utterly glorious take on “I Feel Alright” – the one that Steve Earle re-announced himself with – and before the end of the night they’ve found a way to rip through Billy Joe Shaver’s country rock n roller “Going On A Fast Train”.

The reason for highlighting all these? Well, largely because they’re all fabulous and have some new angle on the original, which takes some doing, but also because the Sam Morrow band are somewhere between all three.

It’s rare to see a full-on rock n roll show in this wonderful venue, a fact that Morrow himself apologises for early on, but he needn’t have. This is as authentic as this music gets.

His most recent record, “Concrete And Mud” came out over a year ago, but as “Heartbreak Man” starts things here, as it did there, there is something special about these songs.

As there is about the Band – and make no mistake about it, The Sam Morrow Band is just that. “Quick Fix” is built around Damon Atkins’ (a skilled singer/songwriter in his own right) brilliant slide guitar, while “San Fernando Sunshine” brings some much-needed warmth to the awful June weather.

Earlier albums are mined too, “Barely Holding On” is a particular highlight in this regard, but largely this is about the “…Mud” of Houston.

“Gold Ol’ Days” is more politically inclined than many of them, “Skinny Elvis” sounds as timeless as the music of the King, and all of them show just what a magnificent record that was.

There’s a new one in the works too. The new song played here “See Crooked, Talk Straight” is an early indication to suggest that it might be special, but one that definitely is, “Paid By The Mile” ends the set. It segues into “Tulsa Time” and Eric Clapton gives half the encore too as “Cocaine” is played, seemingly for fun and on a whim.

If “…Mile” is one that paints an unglamorous picture of life on the road, then, it’s “Coming Home” that rather neatly explains why they all do this. It’s first line: “It’s been my dream since 10 years old, to drive around singing songs,” sums it all up.

That’s why nights like this matter. Because to an artist like Sam Morrow – and the rest of his band – this music is in the blood.