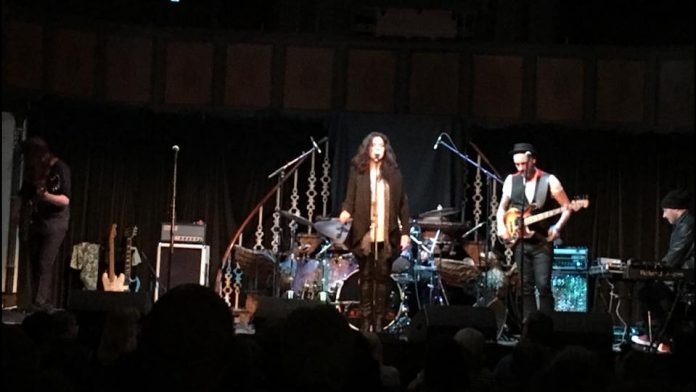 The finest voice in music today?

There is something fitting, perhaps, about seeing Sari Schorr in an old Church as Easter Weekend looms – and if we were to torture the analogy any further, we could maybe say that she has the voice of an angel too.

Except that would be to do her a disservice.

Sari Schorr is simply too good to be typecast. She is blessed with an incredible voice – one so good, in fact, that it is time to stop saying she has the best voice in blues as we have before on this site  – quite simply she has just about the finest voice in modern music.

But, Sari Schorr is more than that as well.

She has a compelling presence on stage, smiling, but not superficial. In fact everything about Sari Schorr says that she’s about as real as real can be.

The focus is on her – understandably – but Schorr is, in this context, just the wonderful singer in a wonderful band.

Make no mistake The Engine Room are every inch that. Rooted in – but not bound by – the blues, and tonight’s show being split into two parts, gives the chance to really reflect on that.

The first 45 minutes or so – beginning with “Ain’t Got No Money” and taking in the superb “Demolition Man” and stopping along the way at Led Zep’s “Rock N Roll” as it did when last they were all in these parts, just up the road in Evesham last Autumn, is topped off by a glorious cover of T Bone Walker’s “Call It Stormy Monday (But Tuesday’s Just As Bad)” and her version of “Stop (In The Name Of Love)” finds a visceral side to the song, as if the woman involved in the lyrics is daring her cheating man to dump her.

That’s her skill. Anyone can do a cover. Few can interpret a song. And even fewer can do it like Sari Schorr. “I Just Wanna Make Love To You” is given a funky sass but even better, the way she does “Black Betty” is magnificent. It becomes a song of hope in these hands.

Of course, none of this would be possible without the four guys in the Engine Room who, well, drive this along. Innes Sibun is a brilliantly skilled guitar player, and he supplied “I’ll Be There” a brand new song that is given its premiere here. He also adds soulful licks to “Oklahoma” and brilliant solos at the drop of a hat and along with bassist Kevin Jeffries, Anders Olinder on keys and drummer Kevin O’Rourke, they give Schoor the opportunity to just do what she does so well.

Together they end the set with three cuts from their aptly named “Force Of Nature” record and “Damn The Reason” – which deals with domestic abuse – together with “Aunt Hazel” – slang for heroin – show the depth of social issues dealt with here.

There’s an encore, of one of her most personal tunes, “Ordinary Life.” And if its key line: “I’m grateful for this ordinary life” is no doubt meant, it still isn’t true.

Back when she was singing backing vocals for others, Sari Schorr must have known, now so does everyone else. She’s not destined for an ordinary life at all. Together with The Engine Room she’s headed for stardom.