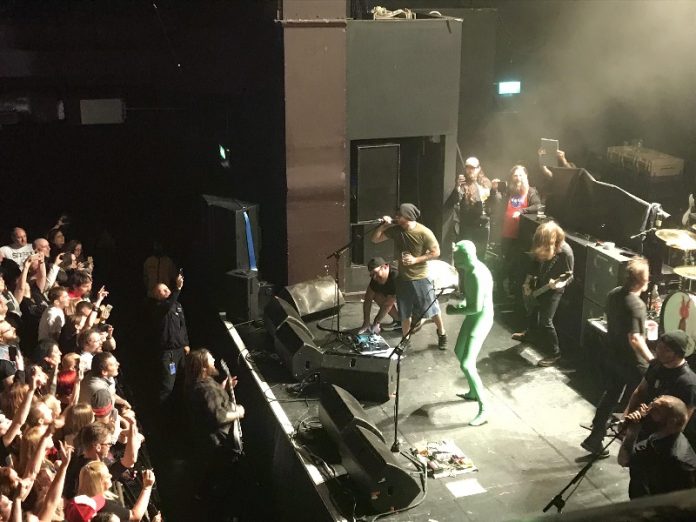 Having a trim, men with beards and dresses – and Kermit the frog. Seether bring the curtain down on their tour

Look at the picture above. Be honest, you probably never expected a Seether gig to end with a man in a Kermit The Frog costume, chasing a man in a rabbit outfit around the stage, while Shaun Morgan – the lead singer and guitarist in a band not renowned for their sense of humour – wanders about the crowd,  drummer John Humphrey smashes his kit and assorted support band members sing bits of Twisted Sister’s “We’re Not Gonna Take It.” Nonetheless it happened.

We’ll get to that, but rewind three and a half hours and Sons Of Texas are already excited. “We’re in Black Sabbath country” yells singer Mark Morales. They are, it’s true, but the band who’s debut album was called “Baptised In The Rio Grande” knows exactly where they are from. As diverse as the new album “Forged By Fortitude” is, southern fried slabs of very heavy metal are what they deal in here. This is a passionate, visceral display from a band that has a lot to give. Whether it’s early work like the huge “Blameshift” or “Feed The Need” from the just released collection, the aim is the same. SoT are here to crush, play loud and make a couple of thousand new fans. Job done on all counts. This being the last night of the tour and all, there’s a cover. That it’s Pantera is no surprise, that they do such justice to “I’m Broken” is. They end with “Texas Trim” – no one believes that Morales is talking about his lawn – and lead man Jes De Hoyos finishes in the front row. There’s that sort of vibe about them. Sons Of Texas are built for this kind of sweaty night. They’ll have many, many more in years to come.

If Sons Of Texas are demob happy, then London trio LTNT are somewhere towards stir crazy. Three bearded blokes in dresses – and who are soon violated by someone in a bunny suit – is too much for one idiot who decides to yell homophobic abuse at them. MV could give a shit about the attire, believe us we’ve been out with worse…..we digress … (although we HAVE been out with worse….). For half an hour the grunge revival is in absolute full swing. Grunge, that is, if it came from rainy South East England rather than drizzly North West USA. There’s a touch of Feeder at their best, even a hint of The Vines maybe but LTNT are very much their own men. Singer/guitarist Liam throws his guitar across the stage at the end of “Body Blood” as if he wants to punish it for something. It exemplifies the thought that they  walking the tightrope of genuinely scary and genuinely intriguing. Like The Wildhearts in the mid-90s it could all go wrong, but really doesn’t. LTNT are most certainly compelling.

In a documentary about heavy metal a few years back, Rob Zombie said it was the biggest genre the public hadn’t heard of. In microcosm that’s Seether too.

The South African quartet (Chris Lowrey is touring with them to beef up the live sound) have packed this place – literally – to the rafters. To have done it on their own terms and pretty much under the radar is incredible. Not for nothing is their opening song “Stoke The Fire” a condemnation of celebrity culture.

That one is from the fine new “Poison The Parish” album, but only three of the set tonight are. Seether have very quietly and without any fuss, built themselves a fine back catalogue from which to pick – and Birmingham knows every word. “My Disaster” kicks in with a groove of the earth-shaking variety and a moshpit breaks out. This is a band of the people and the people are just fine with that.

That’s why “Nobody Praying For Me” turns into a singalong, why “Country Song” is greeted with a roar, and “Fine Again” really is.

“Broken” is stripped down and changes the pace somewhat, but “Betray And Degrade”, another of the new ones, is much more in keeping with the vibe.

“Fake It” is interesting, because you can’t imagine a band that is less fake than Seether. Since 1999 Shaun Morgan has piloted this band through everything, including his own issues and demons, reactions this is his reward. Another of the “…Parish” songs, “Let You Down” gives way to “Remedy”. And Kermit. Which is sort of where we came in.

“It’s been great, Birmingham. Makes up for how bad Glasgow was last night!” Morgan smiles as the chaos dies, before adding: “We’ve been One Direction, goodnight.” It’s these long tours you see, they do funny things to people…..