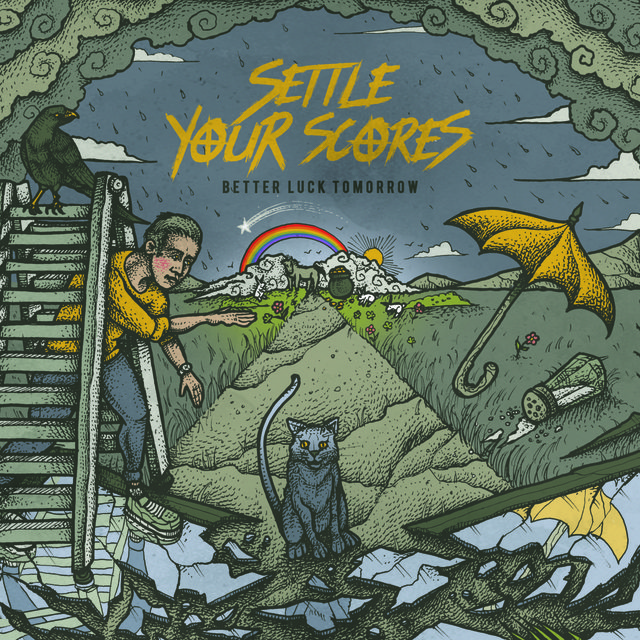 SETTLE YOUR SCORES are back with a dynamic and utterly fun new album that will be released on April 13th via SharpTone Records. Until then, check out their brand new song and second single ‘Zero Hour’ below to get a good feel of what’s to come with their new, full-length offering ‘Better Luck Tomorrow’.

Guitarist Ricky Uhlenbrock comments: “‘Zero Hour’ was one of the first songs written for the new record. As a result, I think it sounds the closest to our previous album. It‘s definitely one of the more uplifting songs on Better Luck Tomorrow. I tend to be a very pessimistic person, but when I play a great show, write a song I‘m really proud of, or read an encouraging message from a fan, it completely reassures me that I‘m doing exactly what I should be doing. This song is about that feeling.”

Watch the music video for the band’s first single ‘Keep Your Chin Up And Your Expectations Down’ here: https://youtu.be/SexfBA6laBc

Get the digital single here: https://SettleYourScores.lnk.to/KYCUAYED

Formed in late 2014, SETTLE YOUR SCORES wasted little time in establishing a name for themselves in the Midwest music scene and the digital sonisphere at large. With a well-established regional presence and an energetic, vibrant and bold live performance, the group unleashed their debut full-length record, ‘The Wilderness’, in January of 2016 and haven’t slowed down since. With nearly an hour of high-energy heavy pop punk under their belt, the outfit hit the road with the likes of KNOCKOUT KID and FOR THE WIN, making several appearances at festivals throughout the Midwest and beyond.

SETTLE YOUR SCORES‘ hard work was not for naught — as the group remained busy on their highly-anticipated sophomore record as well as penning a deal with SharpTone Records, providing them a sprawling and diverse outlet through which to let loose the product of over two years of writing, touring and recording. With the doors to 2018 and beyond wide open, they are prepared to come out swinging, not stopping until they‘re a well-established, effervescent force to be reckoned with on every continent.