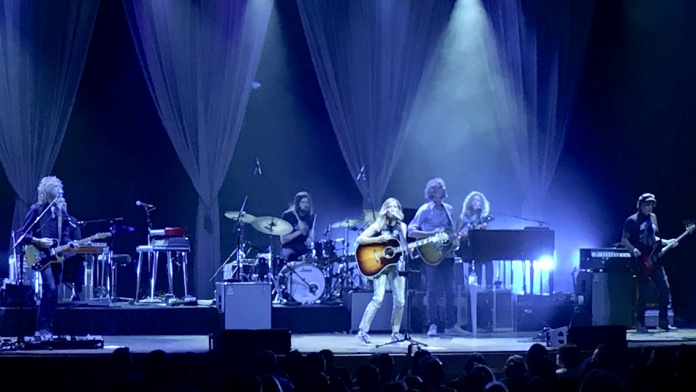 It had been 19 years since I last saw Sheryl Crow live and that was opening for the Rolling Stones at Wembley Stadium in 1999, oddly enough I was wearing the Stones shirt I bought that day to the show tonight.

This was billed as a ‘Greatest Hits’ Tour but early in the set Miss Crow asked if it was ok if they did a bit more besides…..that was never going to be a problem and was met with raucous applause from a packed Symphony Hall, the first stop on a short three date UK trip.

This really was a set list that you would put together for the car, it had the lot….from the opener ‘Leaving Las Vegas’ to ‘A Change Would Do You Good’, ‘Can’t Cry Anymore’, ‘All I Wanna Do’, ‘Every Day Is A Winding Road’ and my two personal favourites ‘My Favourite Mistake’ & ‘There Goes The Neighbourhood’ which Miss Crow and her band kindly played back to back…..just for me…..of course!!!

This show was much more than just the music though, Sheryl Crow is feisty, funny and works the crowd brilliantly, she makes sure you are having as good a time as you possibly can be, the interaction and impromptu jam sessions with her superb six piece band are a joy to watch it has to be said.

We were treated to so many great songs across the evening including ‘Strong Enough’…..which I admit I’ve not listened to in a long while, Country rocker ‘Best Of Times’, ‘Soak Up The Sun’, ‘If It Makes You Happy’ and my favourite track of the show last night ‘Real Gone’….this really was a class show from a truly class act.

Miss Crow is IMHO one of the finest singer songwriters of the last 25 years and she shows no sign of stopping anytime soon, she makes great music, is a superb live artist and even though she’s had her fair share of problems in her personal life and a well documented battle with cancer…..she looks better than ever, performs better than ever and seems to be in a real good place.

The only criticism of the whole evening was aimed at myself…..why on earth had I left it 19 years between Sheryl Crow gigs…….serious schoolboy error!!!