To be fair, Vega frontman Nick Workman has nailed it. “Thank you for having an early tea, or is it a late lunch at this time?” The early curfew means a 5.30 start, but there’s a decent smattering in to watch the midlanders play an entertaining set. Not for nothing is their opening track entitled “Lets Have Fun Tonight” because that’s what they do and that’s what they are. It is interesting that they entered the stage with a mash up of AC/DC, Def Leppard and Led Zep, because add in some keyboards and there’s elements of all of that. FM too, would be proud of “Kiss Of Life”, “Every Little Monster” has a huge chorus, and there’s a touch of Jovi about “Worth Dying For”. Given the fast-paced nature of the show tonight, their half hour, before tea time almost resembles a festival set and the fact is they’d be perfect for that too, such is the confidence they evidently have. An experienced band now, they end with “Saving Grace” and as a warm-up there would be few better. Destined to be higher up bills in the future, Vega are doing it the right way.

It has to be said, if awards were given out for energy, then H.E.A.T’s Erik Grönwall would be the gold medallist, the Oscar winner and just about any epithet you want to give him. From the moment he bounds – and there’s no other way to put it – on to the stage he is a whirlwind. His performance, actually, takes away the focus from the brilliant musicianship on show, but you get the feeling that is how they all like it. “Bastard Of Society” from 2017’s wonderful “Into The Great Unknown” is a strident opener – but then everything about H.E.A.T sounds strident. “Emergency” is rock n roll distilled down to it’s roots, while “Redefined” is an arena rocker being played in a packed club. Like Vega, they’ve got their living in the moment song, theirs is called “It’s All About Tonight” and it’s got a big old bluesy groove about it, while “Beg Beg Beg” manages to play the middle bit of “Whole Lotta Rosie” as well as “Another Piece Of My Heart”. Action packed is the only way to put this, and with Grönwall backed so ably, in particular by guitarist Dave Dalone, H.E.A.T are able to really turn things up here.

A thought strikes me when the Backyard Babies take the stage. I first saw them on my 23rd birthday. In 1998. Which makes them classic rock these days, surely? (and me, old?). But, they were our dangerous boys, our punk rockers, and any sign of them growing old gracefully is thankfully nowhere to be seen. After a dark and brooding “Good Morning Midnight” – from their forthcoming record – they are straight into “Look At You” and you remember why it ruled so much back then. Perhaps because they’ve not changed line-up in that time, BB have a confidence, a chemistry, and they know exactly what they’re doing. “Nomadic” is superb, “Highlights” (and I can never get “Stayin’ Alive” out of my head when the intro kicks in!) better, and the acoustic “Song For The Outcast” actually has a Pogues style punk feel. “Minus Celsius” has always had a chorus to die for, and there is something about Dregen when he delivers the huge riff to “13 Or Nothing” that suggests he really was born to play guitar in a band. And although he’s done the odd side project here and there, the band he was born for was Backyard Babies. As ever, they end with “Brand New Hate” and although the hook line “making enemies is good” is good for a t-shirt (I know, because I had one) its not about that these days. It is a masterclass in rock n roll, and that goes for the band that plays it too. 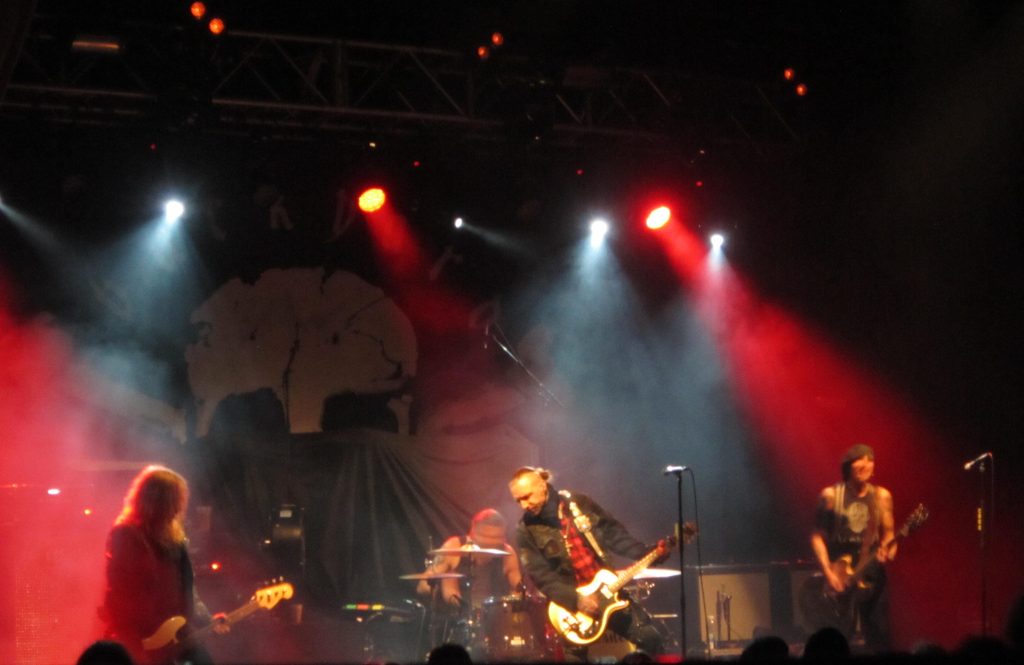 Speaking of the passing of time, there’s a moment tonight when Skid Row play “18 And Life” and I look around the crowd to see people singing every word who weren’t even born when it came out. That, ladies and gents, is how you have a career for 30 years.

Skid Row will always be special to me. I hope it was one of the young kids singing “…..Life” first gig, and I hope they feel as excited as we did when we turned up at the Birmingham NEC on 20th November 1991 for our maiden voyage too.

They were on the Slave To The Grind Tour then and whatever happened that night led me to go back to thousands of shows since.

Of course, its different now. ZP Theart is filling the vocal shoes (mixed metaphor aside) of Sebastian Bach, and he’s doing a fine job too. Rather like Ricky Warwick in the Black Star Riders, he loved the band (he told MV that when we interviewed him before he got the job) but he’s individual enough to put his own stamp on things.

At this stage in their journey, you know what you’re getting from the boys. Classics. Lots of them. So yeah, there’s “Slave to The Grind”, “Big Guns” and “Sweet Little Sister” before you can blink, but there’s also a more recent “Let’s Go” to avoid it all being about nostalgia.

Where Skid Row score, is that even allowing for the lack of Bach, there’s enough of the core band to make this the original gang. “Snake” Sabo, Rachel Bolan, Scotti Hill, they all have their moments in the sun. “Snake” gives a heartfelt speech, Bolan races through “Psychotherapy” (and gets bonus points for mentioning The Wildhearts too) and Hill’s solo in the encore rendition of “In A Darkened Room” is stunning.

That onstage talk from “Snake” comes after “I Remember You” and he suggests that the fact that everyone knows it, means we’re all in this together. He is probably right, but those of us that have  never walked hand in hand writing love letters in the sand are happier with “Monkey Business” and “Makin’ A Mess”.

The encore – as well as “….Room”, blazes through “Mudkicker” before the obvious “Youth Gone Wild”  however incongruous it might be for blokes my age and theirs to be belting it out, we do. And why? Because, somewhere, somehow, for some of us, wherever we go and whatever we do, Park Avenue always leads to Skid Row.