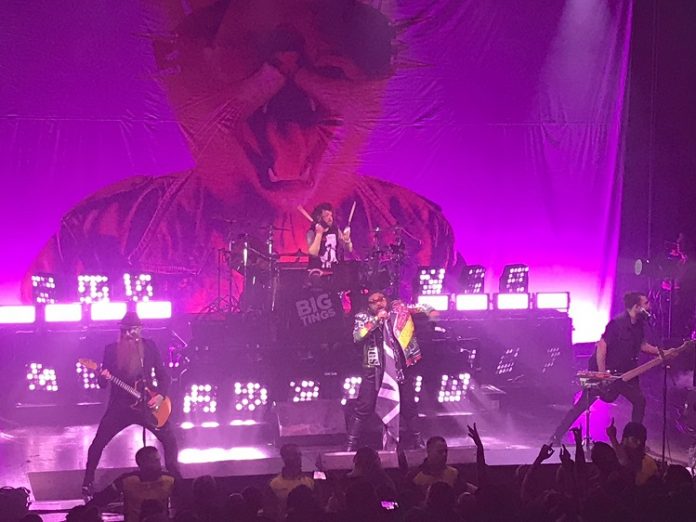 Even Danko Jones knows it. “It doesn’t matter what you shout for sir, it all sounds the same anyway!” The crucial bit, though is what he says to the audience next: “and each one of them is gonna kick your ass just as hard as before.” That, right there, is Danko Jones the man – funny, articulate intelligent – and Danko Jones the band – steeped in rock n roll. Here, tonight he proves that his band is up there with the best of them. “I Gotta Rock” – his mission statement – kicks things off, and over the course of the next 30 minutes or so, the three-piece pack in thrills and spills aplenty. “Sugar Chocolate”, “First Date” and the other seven for that matter rumble relentlessly as if everyone’s life depends on it. “Lovercall” on the other hand casts him in full on preacher mode, finding something primal in the lust, and there is much cowbell related fun to be had in “Full Of Regret”. As “My Little RnR” provides all the proof you need that “Wild Cat” from last year was a phenomenal record, there is a nagging thought to be had. Somewhere, in a parallel universe, Danko Jones is not standing in front of someone else’s gear. He’s headlining an arena. If there’s no justice (there really isn’t) then there’s still some great rock n roll to be had.

You know that feeling when you go to a gig and you never realised how heavy the band was going to be and how loud they were? Yeah, that’s CKY. Another three piece, “The Human Drive In Hi-Fi” absolutely crushes in a way that from just hearing their records that you might not expect. In fact, everything about the Pennsylvanian’s is big, whether its “Sporadic Movement” with its mighty groove from Chad Ginsburg, “Replaceable” with its enormous chorus or the fact that “Frenetic Amnesiac” is like a tidal wave destroying everything it touches, CKY do it right. “Headed For A Breakdown” is as close as things get to a ballad, but nothing here does demur, or is particularly interested in such a sentiment either. A fun set, done in the right spirit, finishes in the same way it’s spent most of it, with its heads down and fists up as perhaps their best-known song “96 Quite Bitter Things” pummels one last time. 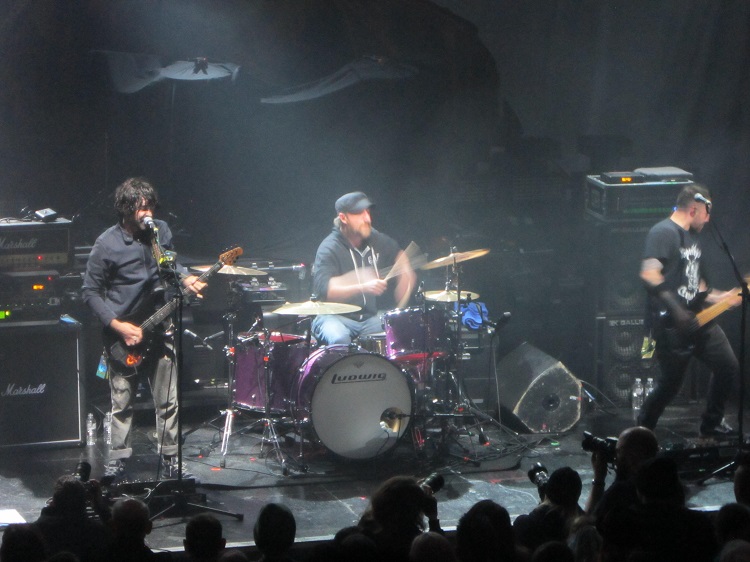 What Chad Ginsburg had said at the end of CKY’s set was actually pretty apt: “We’re out of here, we’ve gotta make way for Skindred.” The context he meant it in is probably not literal, but then, everything kinda has to make way for Skindred. They are less a band more a force of nature who takes their mix of punk, metal, reggae, dance and whatever else they can find, gets on stages up and down the land and just lays waste to everything in their path.

That’s actually true even before they come on. The crowd is rabid after the intro tape, let alone when “Big Tings” – the title song of their new album – starts up. What follows is basically what Skindred have done for ten years. Mayhem. The songs, in truth, don’t matter. What matters is the delivery, like no other from Benji Webbe, but more, the connection between band and audience. “Stand For Something” is defiance writ large, “Machine” is better still – and is more overtly rock n roll than most of their stuff – “Ninja” is their sound bottled and ready to burst. In amongst all this, though there’s a tender moment and “Saying It Now” dedicated to a friend of the singer who passed away, is something acoustic and universal – it says much for their skill that they can change pace like this.

It’s just that they’re better suited to rousing the rabble like on “Kill The Power” or “Nobody” while the encore – also including a snippet of The Prodigy’s “Out Of Space” – gets a couple of thousand Brummies raving like it’s 1992. However, this doesn’t end with glow sticks, thank Christ , but does end with a Newport Helicopter and “Warning” – just like it always does. And always will.

“Unique” is an overused word, we all know that, but it’s the only one suitable here. Their sound, their bond with their audience, ,  their frontman – a real throwback to the ringmaster type of yore – and their ability to crossover make the quartet one of a kind. So, yeah, you’d best make way, because Skindred are coming for you all.