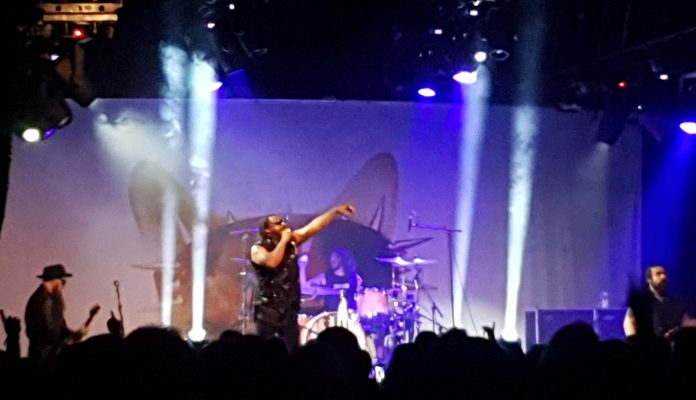 Everytime you see The Virginmarys, you think the same thing: “why are they not huge?” Maybe I am biased, but they have – and always have had – something about them, that is just way better than the rest. Here, dressed in Halloween Make Up (tonight’s gig is being billed as The Night Of The Living Dread), the Cheshire band set about proving what they always seem to prove to me, anyway. That they are exceptional. Used to playing short festival sets, but with a back catalogue of headliners, TV spend their 40 minutes trawling through the best bits of their three albums and the odd EP. ”Get Me Back Home” is mighty here – and the packed early crowd helps – “Into Dust” exemplifies what they are about. Working class, small town boredom, and that undercurrent set to music. They do it so well, though. “SOS4UNI” is a brilliantly catchy song as is “Sweet Loretta”, while “Just A Ride” is the soundtrack to those nights out I never had growing up. Their more recent work, from “Northern Sun Sessions” released late last year, like “Look Out For My Brother” is simply glorious, and “Dead Man’s Shoes” shows they’ve always had that ability. What happens after that, though, rather shows what they are up against. The woman next to me turns and says: “I didn’t know them before this.” “They are one of my favourite bands,” I reply. “Oh, you like the punk stuff, do you?” she says. Thing is I wouldn’t class The Virginmarys as a punk band. No one, really, could categorise them. Beyond the fact they are fabulous, that is.

Skindred are one of those bands.

That is to say, I actually don’t care whether you like their records or not (I do, but that’s not really the point). Go and see them live. They are like a force of nature, a tide of positive energy, and you cannot ignore them, or forget them.

Still touring the “Big Tings” record that they seem to have been touring for years, they have this down to a fine art.

The longest intro tape in the world – managing to make Queen not sound shit takes some doing, but they do – and Benji and boys stroll on to whatever its called from Star Wars (never seen it, don’t care either).

Here’s what I do know. After they do that, “Sound The Siren” starts and all hell breaks loose.

And it doesn’t stop for an hour and a half until 1000 people from the Black Country wave their shirts above their head in “Warning” and Carly Simon’s “Nobody Does It Better” plays them out.

Frankly, if there’s a band with this better honed, or with more grasp on what they do, then I haven’t seen them. “Pressure” does a bit of “Highway To Hell”, “Rat Race” and “Ninja” are superb songs, and covering 2Pacs “California Love” seems to suit them.

There’s a tender moment too. Benji and Mikey Demus do “Saying It Now” acoustically. The song means the world to the singer, but its words resonate too. That is sort of what I mean about the band, because for all the bluster and the tomfoolery (personally I could do without the sandwich eating contest, but that’s just me) they have songs that connect.

“Kill The Power” is another, and that’s how they end. Except, everyone knows they aren’t going anywhere until “Warning”. And by way of “Boom, Shake The Room” they do it.

A couple of things that Webbe said, actually, rather show their point here. “This,” he yells at the start. “Is a celebration of life!” Which is what it turned into.

The second, rather more personal, was this: “Does anyone remember JB’s in Dudley?” he asks. “Well, we played there once. There were about seven people there.” I do remember. It was a legendary gig venue by played some of the greats. I won’t claim I was in the seven however.

He looks round the packed venue tonight. Smiles and says: “you know what? Whatever you believe in, in this world, keep doing it baby. Keep doing it and they will come.”

Skindred did. Skindred do. People came. And that’s why Skindred matter.