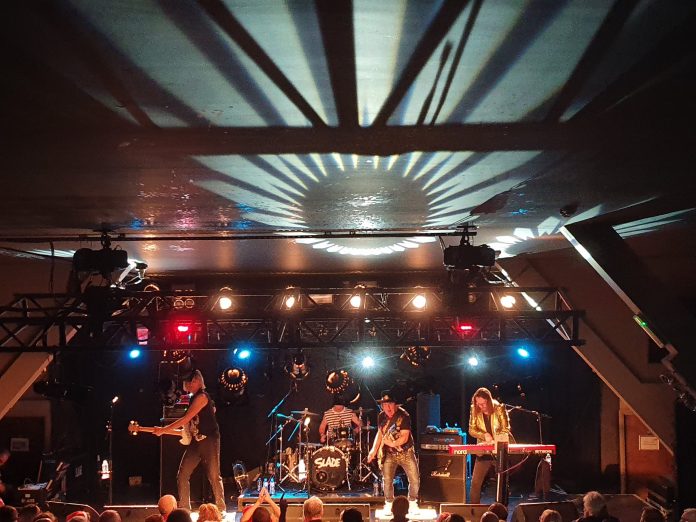 Yesterday afternoon, me and my mate were at a loose end, so decided to go to a non-league football match. The game was in the Black Country, and the team were playing a Southern side.

A group of the away fans were sat behind us and with the crowd not being massive, you could hear every utterance, both on the pitch and in the stands.

One of the home players shouted at the linesman at one point and, one of the southerners says: “blimey they all sound like Slade round here, innit?”

What that shows me is this: Slade are still one of the iconic rock bands that the UK has ever produced. They are still part of the lexicon. Even in 2019, and goodness knows when their last “hit” was, the music they made still resonates way beyond the obvious “its christmasssssssss!” line.

Sometimes it takes a jolt to remind you of that.

In the autumn, we reviewed on the website a singles box-set they put out, and it was one of those moments where you take stock, evaluate and you go, “damn, these were good”.

There are plenty of moments tonight where you do the same.

They are on for an hour and a quarter and pretty much everything they play in that time is solid gold.

“Take Me Bak ‘Ome” opens things and Dave Hill-  the only original member here, given Don Powell’s accident means Alex standing in on drums – can’t half still knock the riffs out, and he looks like there’s nowhere he’d rather be, either.

And he’s a natural, born showman too. Standing front and centre as “Lock Up Your Daughters”, “Everyday” and “Coz I Love You” amongst others pass by like confetti from a glitter cannon, bright and shiny and fun.

John Berry on the violin for “Run, Runaway” is interesting, because growing up in the 80s I remember seeing it on Top Of The Pops and Going Live, and that was sort of indicative of the way they redeveloped themselves. Now, they’ve dispensed with that it seems and they exist merely because Slade should, because their music always will.

“My Friend Stan” is cheeky, cheery irreverence, but “Gudbye T’ Jane” – which sees new boy Russell Keefe add some barroom piano as well as his gravelly vocals (he sings around half the set) –  and “Mama, Weer All Crazee Now” are as good as glam rock ever got, surely. And Hill has a flashing guitar and shakes his arse at you, sort of like the Midlands equivalent of that bit in ZZ Top shows where Dusty and Billy get the furry six strings out.

And that isn’t just a throwaway remark. I say it because it genuinely surprised me how well these songs had stood up, how well they had lasted and how good they still were.

When he stepped up to the mic before playing “Merry Christmas Everybody”, Hill laughed and said: “lets hope 2020 is better, shall we?” What he neglected to say, but probably knows, is that nights of fun like this help make things more bearable. It is worth pointing out too, that Hill’s version of the band has been going the longest of all the eras. No one keeps the legacy alive like him.

I am privileged to be a Midlander. I am lucky to live in an area that has produced so many great bands. The contribution of Slade it seems to me gets overlooked beyond that festive thing. It shouldn’t. They have some incredible songs. They love playing them, and a sold out crowd tonight loved hearing them here.

No further analysis is really required, because that was all tonight was ever supposed to be for.