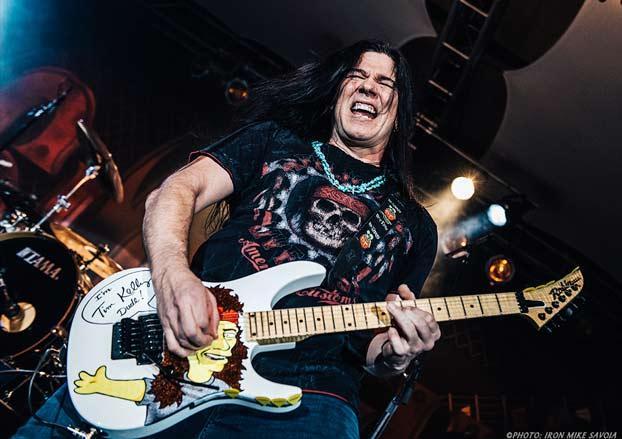 Slaughter vocalist Mark Slaughter recently announced his second solo album, Halfway There, which will be released in May. The track “Hey You” has been released for your listening pleasure!

Halfway There, the followup to 2015’s Reflections in a Rear View Mirror, is return to form for Slaughter, who channels the familiar hard-rock sensibility of such classic Slaughter releases as Stick it to Ya and The Wild Life on “Hey You,” “Halfway There,” “Devoted” and other tracks.

Besides producing the album, Slaughter handled all the engineering, songwriting and arranging duties. He also plays guitar on the album—not to mention the bulk of album’s instrumentation.

“My first solo record was kinda getting back on the horse, so to speak,” Slaughter says. “I mean doing everything and recording; I’m taking on a lot more tasks as an engineer/producer/writer on all this, because I’m doing everything. Ultimately at the end of the day, anybody who is a Slaughter fan will certainly understand I am a large part of the Slaughter sound and vibe, so obviously if you like that, it’s in there. It’s just that I take a lot more liberties on the solo side that I probably wouldn’t do when it’s a group effort.

“The record is basically … I spend a lot of time writing songs, and things just grow out of me. Ill be woken up in the middle of the night from nowhere, and the song’s just in my head and I just exorcise the demons and there you have it. I guess what it is is, an artist makes art. And I’ve really come to the fact that since we haven’t made a Slaughter record in so long, it’s one of those things that I still have to make the art. That’s what I do. That’s what I love to do, and that’s what I’ll continue to do.”

Halfway There will be released May 26 in North America by Megadeth bassist David Ellefson’s EMP Label Goup/AMPED and EMP/SPV in Europe and May 10 in Japan via EMP Label Group/Universal.

“I’ve been friends with Mark for more than 30 years, since he was in Vinnie Vincent Invasion, and there’s a lot of shared history,” Ellefson says. “When we started talking about the idea of putting this record out, yes, it was a great and natural fit. Mark is such a tremendous talent and songwriter, and the scope of that is truly evident on Halfway There. We’re extremely proud and excited to have been able to partner with him on it, and can’t wait for the world to hear it.”
Halfway There is available for pre-order on CD and LP via empmerch.com.
Slaughter will play several US dates throughout 2017, including a May 26 performance at Rocklahoma.