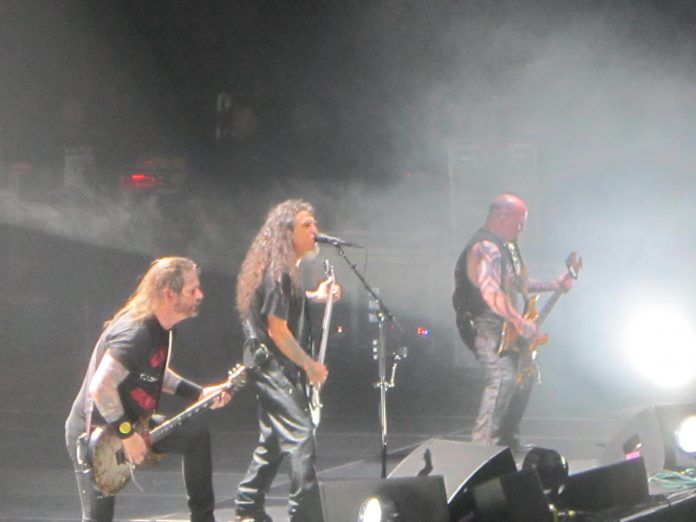 They say all good things come to an end and that is why I’m here at the Arena in Birmingham on a wet Wednesday night to witness the last flourish, in a live setting, of the Godfathers of thrash metal Slayer. After nearly 37 years, having released 12 studio albums the guys have decided to call it a day and have undertaken a deserved farewell World tour.

They have always been an outfit that others will be measured by and tonight is no different as they have lined up supports that would strike fear in a lesser band.

At the ridiculously early time of 6.15 pm, Florida Death Metallers, Obituary hit the stage just as I sit down in my seat at the side of the stage. They open with instrumental `Redneck Stomp` and manage to share three numbers from last year`s self-titled tenth album with `Sentence Day`, `A Lesson In Vengeance` and `Turned To Stone` amongst others before closing out with `Slowly We Rot` Having witnessed the mosh circle below, I breathed a sigh of relief as my days amongst them is long gone. 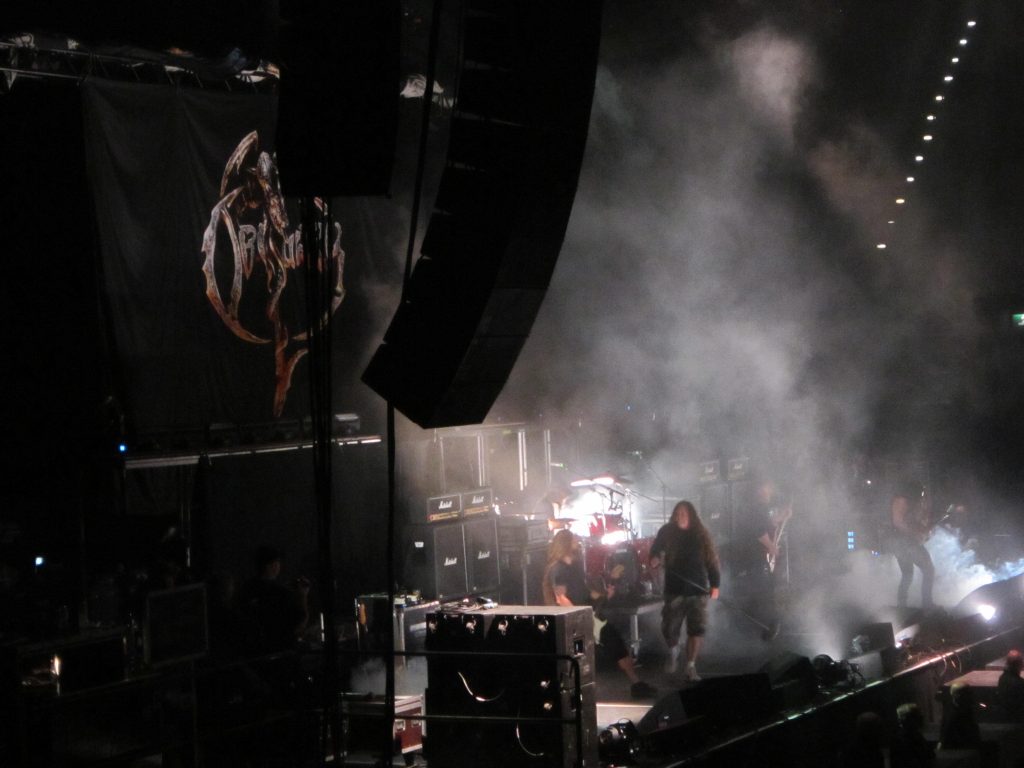 It`s still only 7.05 pm and one of thrash metals “Big Four” arrive to `Caught In A Mosh` and proceed to delight all with a nigh on Greatest hits set including `Got the Time`, `I Am The Law`, `Evil Twin` and `Antisocial` within this forty-minute set. Joey Belladonna and Scott Ian are in fine form as the former jumps precariously from plinth to plinth at the front of the stage and the latter marches around in circles pounding his rhythm guitar. The boys leave us with `Indians` from their 1987 album “Amongst The Living”. 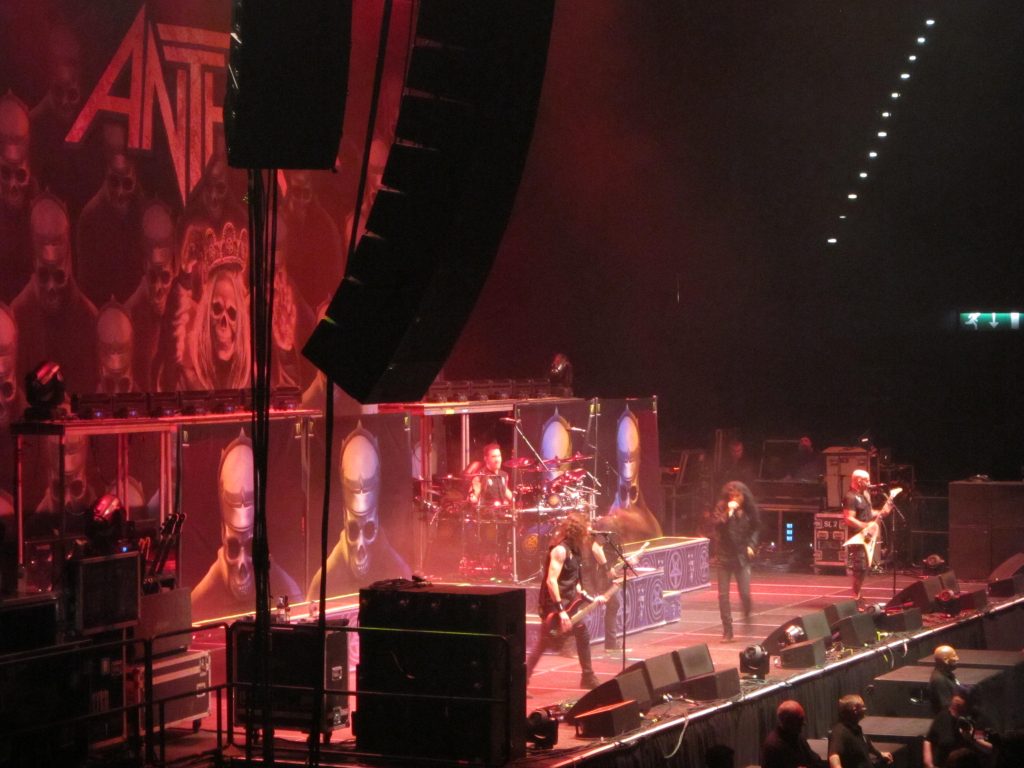 The penultimate offering tonight arrives in the guise of Virginia`s finest Lamb Of God and by the reaction of the crowd, with one of the biggest mosh circles I’ve ever witnessed and the number of bodies surfing towards the security at the stage, these could indeed be the Heir apparent to Slayer. They belt out an unrelenting nonstop fifty minutes of sheer undiluted metal. Randy Blythe prowls the stage as if he`s hunting for pray as he whips the faithful into a frenzy. He endears himself to us all by stating that Brum is the birthplace of Heavy Metal and dedicates the song `512` to the originators from our fair city Black Sabbath. Another song and I think it was `Now You`ve Got Something To Die For` is dedicated to their friends Napalm Death along with Judas Priest and Doom. This intense set concludes with `Redneck` before the boys take their leave. 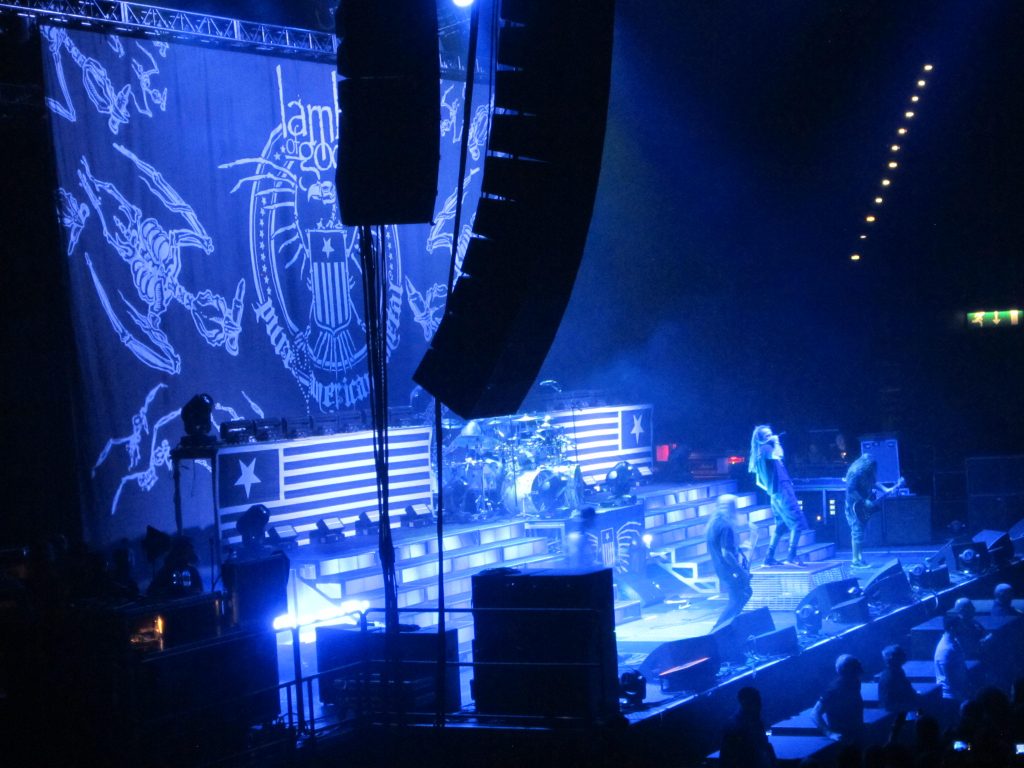 The anticipation is almost tangible as we await tonight`s headliners. We don`t have too long to wait as the curtains with pentagrams beamed on them drop and the band smash straight into `Repentless` from the same titled last album. Slayer have made some of the most brutally aggressive music ever created and we are offered up this in abundance as this ninety minute, almost greatest hits set testifies. There is something for everyone here as we are offered `Mandatory Suicide`, `Payback`, `Raining Blood`, `Chemical Warfare` and the controversial `Jihad` Guitarists Kerry King and Gary Holt stalk the stage as drummer Paul Bostaph pounds away while flames leap high nearby. The pyrotechnics are a vision to behold and I can feel the heat from them from my seat a fair distance from the stage. Vocalist Tom Araya takes a moment to reflect mid show and says “I just want to take a look at you all” as the house lights are switched on for a moment and he scans the audience. The show continues, and I am delighted to hear tracks such as `War Ensemble`, `Blood Red`, Dead Skin Mask` and my favourite `Seasons In The Abyss` from said album. After playing nearly 3000 concerts across the globe and receiving countless awards including five Grammy nominations and two Grammy Awards the band end the show with `Angel Of Death` with a nod to lost brother, guitarist Jeff Hanneman, who passed away in 2013.

Tonight, was a fitting end to a band who are bowing out, still at the top of their game and leaving a substantial legacy behind. It was quite moving to witness Tom Araya looking out over the crowd as the house lights came up taking in the number of fans who stayed behind to cheer and chant “Slayeeeerrrr” He seemed to be storing this memory away before walking to the mic to thank us all before taking his leave, No. Tom, Thank You!!