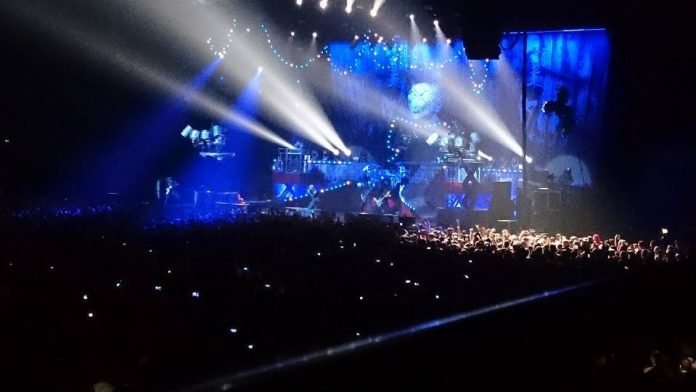 Korn sound enormous. There’s barely any need for any waffle here, no need for preamble, because Jonathan Davis and his mates are not pissing about tonight. There’s a short intro of “Twist” after which “Here To Stay” fills the cavernous environs of the Barclaycard Arena on it’s Jack Jones. The set slams and whether you want to or not – Christ whether you like Korn or not – you are swept along in it’s maelstrom. There is no “show” to speak of (despite the huge backdrop there is precisely no doubt about who’s gig this really is) which makes it all the more commendable that Korn are able to rip this shit up in quite this way.

It helps, of course, that most of the audience are familiar with these songs, but it doesn’t actually matter whether you are able to sing with gusto the lyrics to “Falling Away From Me” or not – because it’s gonna bludgeon you anyway.

The riffs are huge, the breakdowns bigger and the choruses built for enormodomes.

There is a feeling, like there was when they first emerged that watching Korn is to watch a Davis exercise his inner demons right in front of you, he insists that you get out of his face, he is quite certain you will never bring him down – and that’s before he’s tooted away on the bagpipes for “Shoots And Ladders,” MVM can confirm that London bridge is still falling down just like in the mid 1990s and the track can still get 10,000 metal fans screaming “knick knack paddy whack, give a dog a bone,” it also includes a snippet of “Master Of Puppets” just for a giggle.

After this, they have Birmingham – including those that knew precisely three of their songs (your humble reviewer may be in a minority….) eating out of their hands – and “Y’all Want A Single” is bombastic vitriol, “Freak On A Leash” goes down like the proverbial bomb and they conclude with “Blind” which is all staccato rage, even if it’s 20 years old.

With the passing of time – and ye gods it’s 16 years – it’s easy to forget. But back at the end of the last century what Slipknot did on that debut album was genuinely groundbreaking and genuinely threatening. Nine masked, possibly unhinged, men in boiler suits, they were here to infest the youth of the world.

As if to reinforce the point, just before Slipknot come out tonight they play some AC/DC, like a million bands have over the years. Even when they kick us off tonight, it’s as all arena bands do, with the first track on the new album, “XiX,” and they follow it up with a second in “Sarcastrophe.” All of this is all very well, but you don’t fill places like this – and make no mistake the Barclaycard Arena is jam packed with 14000 (there are 9000 on the floor alone) maggots tonight – without some massive crowd pleasers so “Heretic Anthem” and “My Plague” are lapped up.

Slipknot’s skill was always that they could make bloody unsettling songs sound bloody great. Case in point “The Devil In I” which has precisely no right to be a fantastic song but is. “Psychosocial” on the other hand is in possession of a chorus that any big metal band in history would smash Eddie in the face with a brick for.

And that’s the thing about Slipknot. Strip away all the masks, the percussionists leaping about and the flames and spectacle and these songs just work. In any setting, at any time.

As do the two new members. Mystery surrounded who was replacing Messrs Jordison and Gray, but now we know. And as “The Negative One” is blasting out, it’s business as usual.

That business is extremely good in fairness, as it includes “Duality” and a humungous “Before I Forget” – the pair are, let’s be honest here, just a brilliant modern(ish) take on 1980s arena rock and as much as no one wants to admit it as they stick their fingers into their eyes and scream that they were creatures before they could stand, with the pyro and spinning paraphernalia it could be Motley Crüe on stage (this is meant as a compliment, however it is perceived).

“Wait And Bleed” carries on the theme and “Spit It Out” sees Corey Taylor command the entire crowd to to get on the floor and jump up in unison. Do you reckon they did it? Course they did. And that’s the power of this band right there.

After “Custer” it’s encore time. Which means “(Sic)” and “People = Shit” and the nihilist anthem “Surfacing” which includes an impressive amount of fireworks and flame.

What tonight proves more than anything is despite what all the prophets of doom might say, metal will always survive and fill sodding big venues, thank you very much. Even if it takes a load of scary looking blokes in masks with a back story, if the songs are right, people watch in their thousands. You can peek people’s interest with gimmicks, but to keep them coming for nearly two decades you’ve got to have real talent.

Slipknot aren’t reinventing the wheel anymore. They don’t need to. They are doing just fine.

(Thanks to MVM’s Garry for the pic)