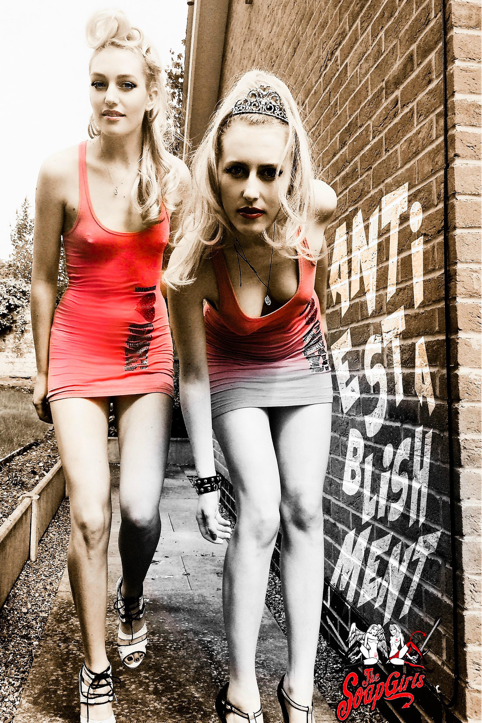 Don’t ask them to be friends, whatever you do
The SoapGirls unveil their new video for the primal and emotional break up song Rather Be Dead.
Rather Be Dead is an outsider anthem that’s both androgynous and audacious.
The songs’ sardonic lyrics and hooky chorus shines, with their ever-so-edgy vocals, fuzzed guitar and throbbing bass creating an insouciant blast of grunge-rock.
.
Rather Be Dead focuses on “the rage and the hurt that a person feels and goes through when learning that the person they counted upon the most betrayed your confidence.”  while the the startling video is more “from an angle of voyeurism as it shows all the most vulnerable emotions and has no pretence to it.”
Hailing from South Africa,  the alluring, hypnotic and nonchalant SoapGirls were given their name by the general public  “We have been The SoapGirls since we were 8 and 9 selling hand made soap and street performing for various causes, we did this 365 days of the year for 9 years”
The SoapGirls believe in “absolute freedom and pursuit of ones dreams” , they’re fiercely outspoken for animal rights, society’s most vulnerable  and anti government policies and write straight from the heart with every song being a real experience, either about themselves or someone close.
Armed with a venomous swagger and catchy, riff-oriented guitar grind, backed up by their strong songwriting abilities, dedication and determination to their craft, The SoapGirls have earned them a formidable live reputation, with a devoted group of followers known as the ‘The SoapSuds ’, following the band across the globe.
With unforgettable melodies and catchy choruses, their intense rawness and authenticity needs to be witnessed first hand – prepare yourself for The SoapGirls’s next chapter with details of a new album, festival appearances including Rebellion RebellionPunkMuskFestival https://www.facebook.com/events/592226740955547/, https://www.facebook.com/events/588426204692066/  to follow release of the succulent Rather Be Dead.
To order Rather B Dead go to : http://www.cdbaby.com/cd/thesoapgirls1