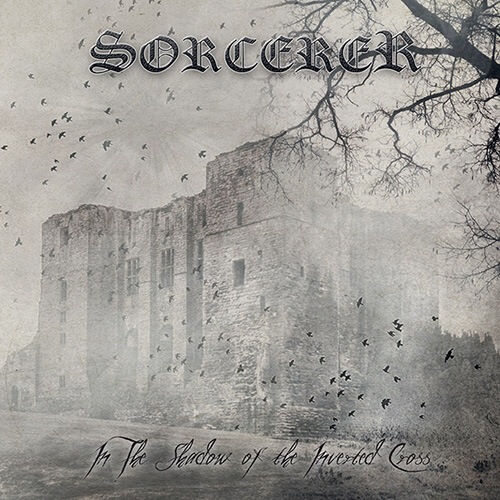 Classic metal meets doom on the album that almost literally proves that good things come to those who wait.

“In The Shadow Of The Inverted Cross” is, to all intents and purposes, the Swedish quintets debut record. There have been, technically, a couple of other releases – notably 2011’s Sorcerer album – but those were demos. Demos, by the way, which were first recorded in 1988.

The band made their return in 2010 at the Hammer Of Doom festival, after an enthusiast contacted them to play a set, and apparently the buzz was such that they band almost had to make a record.

So here we are some near five years later with the resultant “……Cross,” and it only takes the intro to “The Dark Tower Of The Sorcerer” to convince that something a little special is going on. An eerie opening, a sense of foreboding, gives way to a riff that’s something approximate to a slowed down “South Of Heaven” and we are “drowning in insanity” before we know it.

A magnificently weighty album, monolithic, thick riffs abound, but this is absolutely not your standard doom affair. When it reaches it’s near perfection of “Sumerian Script” you can imagine that Ronnie James Dio would approve.

Instead being constrained by a straight jacket of expectation “In The Shadow Of The Inverted Cross” is a record that is happy to take in the spectrum of all things heavy, “Lake Of Lost Souls” lays waste to all in its path, clinically destroying pretty much everything in its way, but equally the sense of grandiose gallop and urgency on “Exercise The Demon” is Power Metal writ large.

The title track kicks off with tribalistic slam and sees the band dealing with judgement day, the Maiden-esque “Prayers For A King” adds yet another different shade to things, and “Gates Of Hell” is just a brilliant heavy metal song.

Closing song “Pagan’s Dance” takes the same feeling of impending doom that was present right at the beginning and spins it over something that builds into a veritable epic where fires are burning and Satan is whispering our name and all kinds of goings on are happening as the choruses soar. In doing so it gives collection the finish it so richly deserves.

“In the Shadow Of The Inverted Cross”  is almost exemplary. Brilliantly played and conceived. It is absolutely marvellous stuff. Boys, we beg you, don’t wait another 27 years.