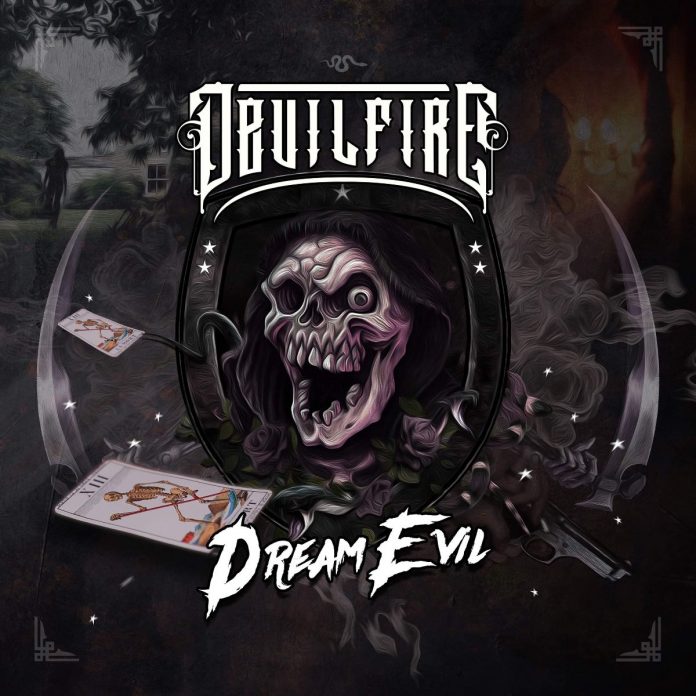 The single is available to pre-save on Spotify, Apple Music and Deezer: https://ditto.fm/dream-evil

Dream Evil is the first new music to be released from their forthcoming album – Black Soul Vendetta – scheduled for release later this year.

Devilfire’s frontman, Alex Cooper said of the song, “Dream Evil taps into Devilfire’s dark psyche. Put simply, it’s about a nightmare, your deepest fears playing out in a dream. It also kind of relates to She’s Life Fire a song on our debut album and could be viewed as a sequel.

“It’s a song that works on two levels…
Level one – I’m just talking about having bad dreams about one’s past. While level two – That I’m talking about a relationship and that it’s the ghosts from that past that are the nightmare.

Personally, I loved playing around with the different ways all these ideas intertwine together.”

He went on, “Musically, we set out to create a truly nightmarish rollercoaster of a song that was both hard-hitting and epic at the same time. I think we achieved that.”

Devilfire are a 5-piece hard melodic rock engine from Birmingham, England formed off the back of an early studio session between long term friends, Alex Cooper (producer) and drummer, Lars Wickett. Their working project, then known as Devilstar, took 3 years to gestate before things fell into place on a lengthy tour of Eastern Europe as guests to Tarja Turunen. That tour cemented a growing reputation as a live force and what followed was the undeniable power of their debut album, Dark Manoeuvres, released in 2017 to high acclaim.

Dark Manoeuvres was followed up with further sold-out dates on the road before the release of a short-run EP ‘Out Of The Dark’ to placate fans’ demands for further material.

Now, with the release of the single Dream Evil, they introduce the world to their new full-length album Black Soul Vendetta. And they have only just begun.