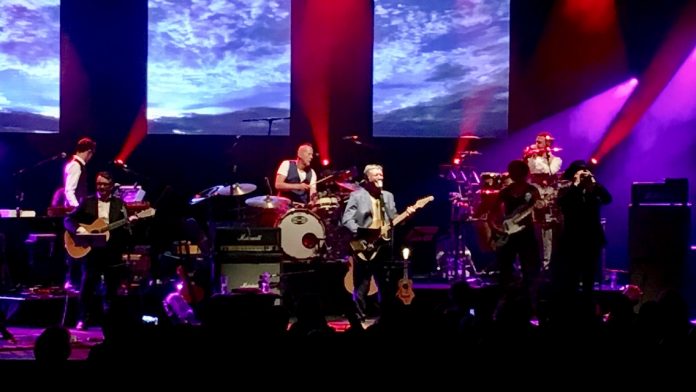 Garry squeeze’s in to the Symphony Hall

When one of the UK’s finest ever bands head out on tour it’s not a case of ‘Shall We’…..it’s more a case of ‘We Shall’

Over the last 32 years I’ve seen Squeeze live upwards of ten times and each time I’ve walked out having had a thoroughly enjoyable evening…..this time was no different.

When a band can open a set with ‘Take Me I’m Yours’, ‘Annie Get Your Gun’ & ‘Hourglass’ you just know you’re in for a fine evening, but tonight was not just about the hits, the band have a new album out in a few days and this tour was the perfect opportunity to wheel out a few new numbers.

‘A&E’, ‘Rough Ride’ & ‘Final Score’ from the new album ‘Knowledge’ were played back to back (to back) and were widely well received but sadly as with many ‘heritage’ bands when they wheel out new stuff a percentage of the audience use these for trips to the bar or toilet breaks…..this I’ve never quite understood, give the new material a go for gods sake……after all ‘Up The Junction’ was a new track once upon a time.

The rest of the main set consisted of classics such as ‘Tempted’, ‘Another Nail In My Heart’, ‘Goodbye Girl’ and the afore mentioned ‘Up The Junction’ along with tracks from 2015’s  excellent ‘Cradle To The Grave’ and the absolutely stunning  track ‘Wicked And Cruel’ from 1991’s ‘Play’ album.

The final two tracks of the main set ‘Labelled With Love’ produced a mass sing along from a sell out crowd that took a little while to warm up, (all seated venues can have this affect, no one wants to be the first to stand up) and my personal favourite ‘Slap & Tickle’ which shows off the full range of drummer Simon Hanson’s talents in spectacular form.

The band return to the stage with the brand new song ‘Departure Lounge’……not sure it was the correct track to open the encore to keep the momentum going but it was a wonderfully crafted track that I shall enjoy listening to again on the new album ‘Knowledge’.

‘Cool For Cats’ is always a crowd pleaser as is final track ‘Black Coffee In Bed’…..it doesn’t matter how many times you hear the track it’s a belter pure & simple, whether it’s played as the original version or tonight as an extended band introduction and crowd involvement sing along……it’s an absolute gem.

Squeeze have enjoyed a bit of a resurgence in the last 4-5 years and are now in the enviable position of adding dates to their tours to meet the demand, long may this continue, the work of Messrs Difford & Tilbrook (who in my humble opinion should be mentioned in the same way as the work of Lennon & McCartney) is an absolutely joy to behold, classics for the 70s, 80s, 90s and the present day.

I make no bones about loving Squeeze as a band…..from the moment I bought ‘Up The Junction’ In Woolies in Wolverhampton in 1979 I was hooked…..I still am in 2017.