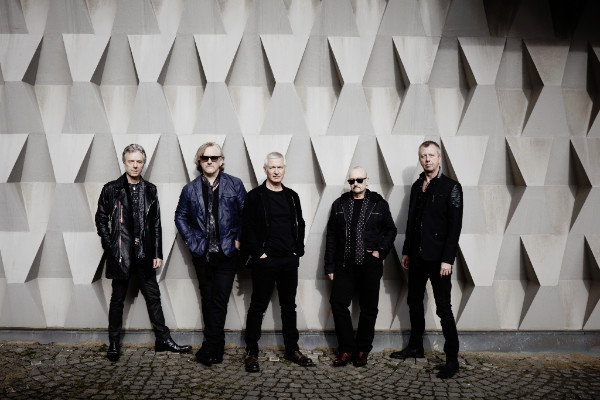 Thunder are delighted to announce that, ahead of the release of the live film / album ‘Stage’ on 23 March 2018 [full info follows] there will be an exclusive screening, 3 days before the official release date.  The band will screen the film in a cinema in the city where it was recorded, Cardiff, on March 20th 2018.
This screening is open only to competition winners, entry is free via the band’s website at www.thunderonline.com.

200 winners will be chosen randomly and informed in early March, entry will be by guest list only.

Frontman Danny Bowes said, “We’re chuffed to pieces with the way the film turned out, and to get to show it to fans ahead of release is pretty sweet. Even better that it’ll be shown in Cardiff, where the show took place. I wish I was going, but it’s a fair way for me, and I’ve already seen it of course”.

On 23 March 2018, Thunder will release a brand new live set ‘Stage’ through earMUSIC. ‘Stage’ features hits from right across the band’s career and includes fan-favourite classics like ‘Backstreet Symphony’, ‘River Of Pain’ and ‘Love Walked In‘ and bringing things right up to date with tracks from the 2017 Top 3 UK Chart Album title track Rip It Up‘ and ‘She Likes The Cocaine‘.  Thunder are of course a noted and globally in demand live act.  ‘Stage’ was captured at Cardiff Motorpoint Arena on March 24th 2017 during the UK Tour. They toured Europe in April, followed by summer festivals, more shows in Germany with Alice Cooper in November, then returned to the UK to close the weekend at Planet Rock’s ‘Rockstock’. They sold out 2 Christmas shows at Wolverhampton Civic Hall in December, followed by shows in Japan, Germany, Austria and Holland in January. The band are performing on the main stage at Download this year, on Saturday 9 June which Guns ‘n’ Roses headline. This is a band that knows how to rock a crowd and shows no signs of letting up!

Frontman Danny Bowes says of the new record, “The Rip It Up album was so well received, it was no surprise the tour was brilliant too.  We decided to include a Cardiff Motorpoint Arena show on the tour, purely because it was so good when we played there with Journey & Whitesnake in 2013. Capturing it as well turned out to be one of our better decisions, because the resulting film and album are a shining example of an organic “coming together” of fans and a band. We’ve released a few live recordings over the years, but this is most definitely up there with the best of them. We’re extremely pleased with it.”

‘Stage’ will be available as a 2CD + Blu-ray, 3LP, DVD, Blu-ray and a Limited Edition Box Set.  The audio-visual formats will feature a host of bonus and interview material, whilst the Limited Edition Box Set will include also boast the full ‘Live At The 100 Club’ set, the ’29 Minutes Later’ acoustic set [only previously made available as a Record Store Day release], and the documentary film ‘A Difficult Day In January: Thunder In London’ [all tracklistings / content as below].

Since forming in 1989, Thunder have established themselves at the top table of UK rock, notching up some twenty Top Fifty singles and two Gold albums. The band’s sound is a timeless marriage of unforgettable melodies and sheer rock power.  ‘Stage’ shows off not just an amazing catalogue of unforgettable rock hits, but just the sheer live power that Thunder possess. 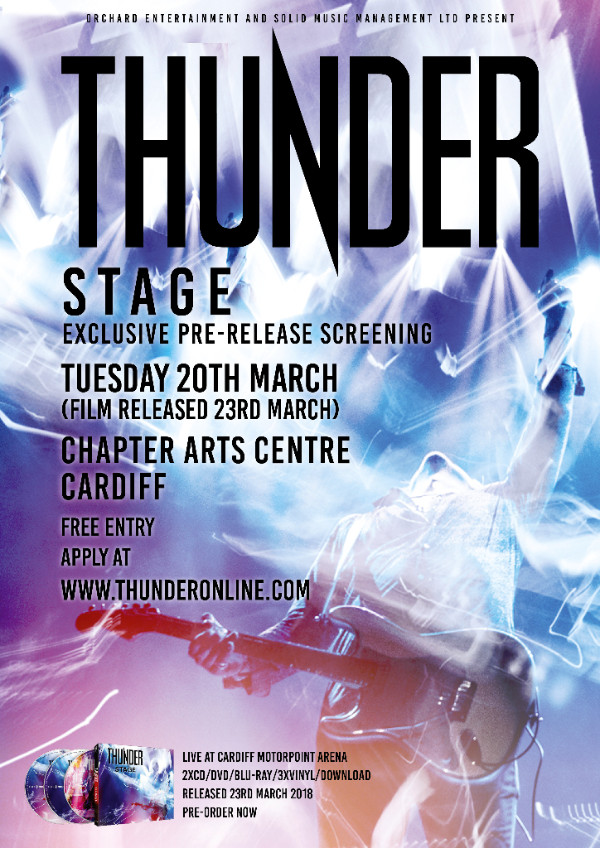 CD1
1. No One Gets Out Alive
2. The Enemy Inside
3. River Of Pain
4. Resurrection Day
5. Right From The Start
6. Backstreet Symphony
7. Higher Ground
8. In Another Life

SIDE A
1. No One Gets Out Alive
2. The Enemy Inside
3. River Of Pain
4. Resurrection Day

SIDE B
1. Right From The Start
2. Backstreet Symphony
3. Higher Ground

SIDE E
1. Wonder Days
2. She Likes The Cocaine

DVD
‘A Difficult Day In January:
Thunder In London – The Documentary’