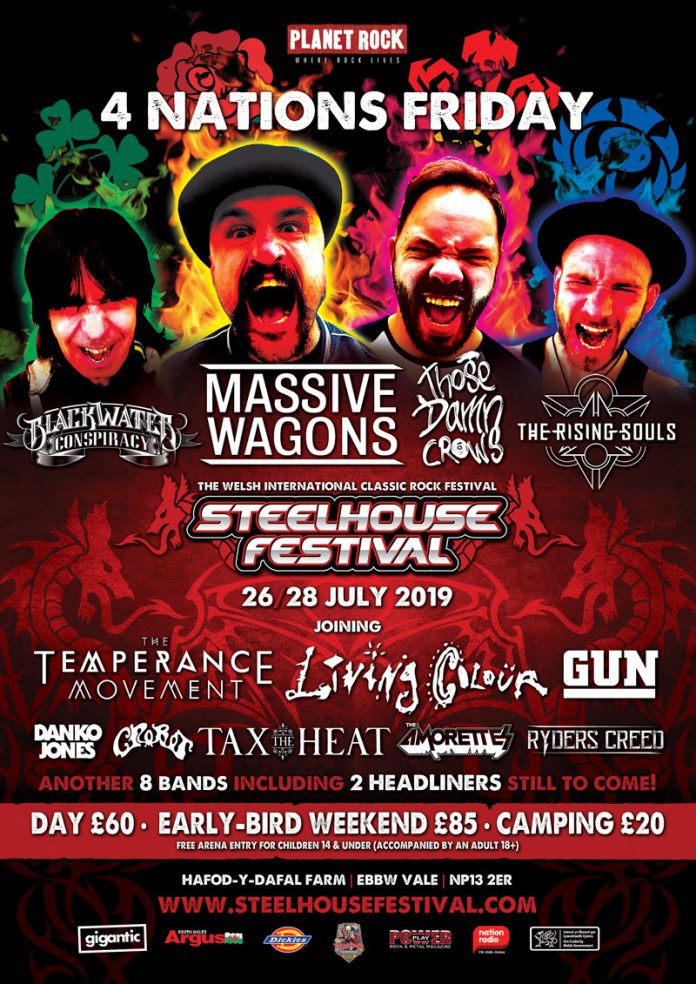 Steelhouse Festival is back once again in 2019, running Friday 26th of July – Sunday 28th of July. In its ninth year and coming on the back of last year’s hugely successful event – which sold out of weekend and camping tickets well in advance – there is already a whole lot to look forward to.

Taking inspiration from the impending Six Nations tournament, the opening exchanges at Steelhouse 2019 will take place on ‘Four Nations Friday’. Each band will take to the stage representing their own proud nation.  Playing with the benefit of home advantage, Those Damn Crows will carry the hopes of all Welsh rock fans. Kicking it down the throat of the opposition and getting the games underway is Ireland’s Blackwater Conspiracy. Scotland’s charge for the line comes from The Rising Souls whilst English hearts and Grand Slam dreams lie with headliners, Massive Wagons. Whose set will be hailed as the greatest?

Friday night is the Steelhouse Festival ‘free’ evening for weekend and day ticket buyers. That’s an offer that cannot be matched – not least when you realise that the full price for the whole Steelhouse weekend costs the same as just 80 minutes of international rugby… 3 days of blood, guts and passion for under 100 quid.

Promoters Mikey Evans and Max Rhead said, “Wales – it’s a rugby-mad nation and we’re no exception to that rule. If there’s any opportunity to for us to make a connection between the great game and the Festival, well, you can rely on us to do that! So, in the week before the greatest rugby competition in the world gets under way we are passionately proud to announce four great British bands each representing their home nation. This is the cream of new UK music going head-to-head at Steelhouse 2019 – who will be crowned champions on Four Nations Friday! Nothing will be left on that stage… Crouch, bind, set… Let’sRuck ‘n’ Roll!”

Officially the UK’s highest music festival, The Steelhouse Festival will once again be held in the spectacular surroundings of the southern edge of the Brecon Beacons, and bring the finest classic rock artists to the heart of the South Wales Valleys.

Aiming to be the UK’s best value rock festival, and a true family friendly event, the Steelhouse Festival legend goes on – see you at the top of the mountain!

The ‘Leaders of the Pack’ Speak:

Shane Greenhall, vocalist from Those Damn Crows, playing Steelhouse 2019 with the benefit of home advantage:

“The Crows can’t wait to be back up The Mountain… Fee fi fo fum… I smell the blood of an English rock n roll band. Ha ha!!”

“Onto the hillsides and into the valleys of fair Wales stride the hungry lions… anyone seen Those Damn Crows? It’ll all be over in a ‘Blink of an Eye’!!

“Like the Ireland rugby team Blackwater Conspiracy is not intimidated by anyone, and like the team we’ll do our talking on the field or in this case, Steelhouse Festival stage!”

“We are delighted to be on the four nations bill at this year’s Steelhouse Festival. We have been wanting to play at this since the festival kicked off and it’s an honour to be representing Scotland on this epic bill in sunny wales. Roll on July 26th!”