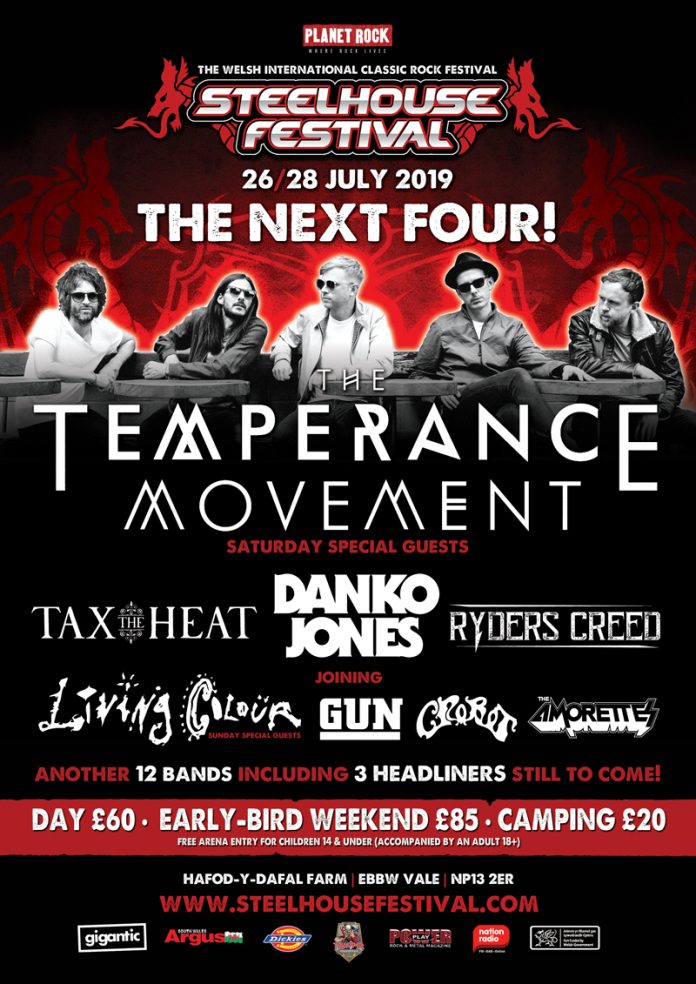 Steelhouse Festival is back once again in 2019, running Friday 26th of July – Sunday 28th of July. In its ninth year and coming on the back of last year’s hugely successful event – which sold out of weekend and camping tickets well in advance – there is already a whole lot to look forward to. The next four bands that will be gracing the mountain are The Temperance Movement (Saturday special guests), Danko Jones, Tax The Heat and Ryder’s Creed. The Temperance Movement guitarist, Paul Sayer said, “We can’t wait to play Steelhouse again this year. It was one of the first UK festivals we played when the band was starting out so to come back and play again on such a great bill is going to be awesome!”

Promoters Mikey Evans and Max Rhead said, “What a pleasure to welcome back The Temperance Movement, rightly taking their place towards the top end of the bill – Saturday special guests. The last time they played the mountain it was 2013. They had an afternoon slot and their first album was just about to be released. Since then they’ve become one of Britain’s premier rock acts, a main stage proposition at any massive festival and an album chart regular. It’s fair to say they re-opened the door for a new generation of UK rock acts, theirs will be a triumphant set.

“Danko Jones’ reputation as a ferocious, unstoppable live force was confirmed to us a few years back at Planet Rockstock. What we witnessed that evening made them a priority Steelhouse Festival target. We’re so happy we’ve finally hit the bullseye. If you have not seen this band in the flesh, they are coming all the way from Toronto to be with us, so make sure you do not miss them on Sunday, 28th of July.

“Ryder’s Creed take on the mantle of opening Saturday at Steelhouse 2019 – what you need as the first band on is a tidal wave of energy, and a set of songs that burrow into the brain immediately. You’re setting everybody’s mood and expectation for the day. It’s a responsibility! Ryder’s Creed are more than ready to take on the challenge and, like The Temperance Movement, we’ll probably be welcoming them back as special guest in 2025!”

Officially the UK’s highest music festival, The Steelhouse Festival will once again be held in the spectacular surroundings of the southern edge of the Brecon Beacons, and bring the finest classic rock artists to the heart of the South Wales Valleys.

Aiming to be the UK’s best value rock festival, and a true family friendly event, the Steelhouse Festival legend goes on – see you at the top of the mountain!