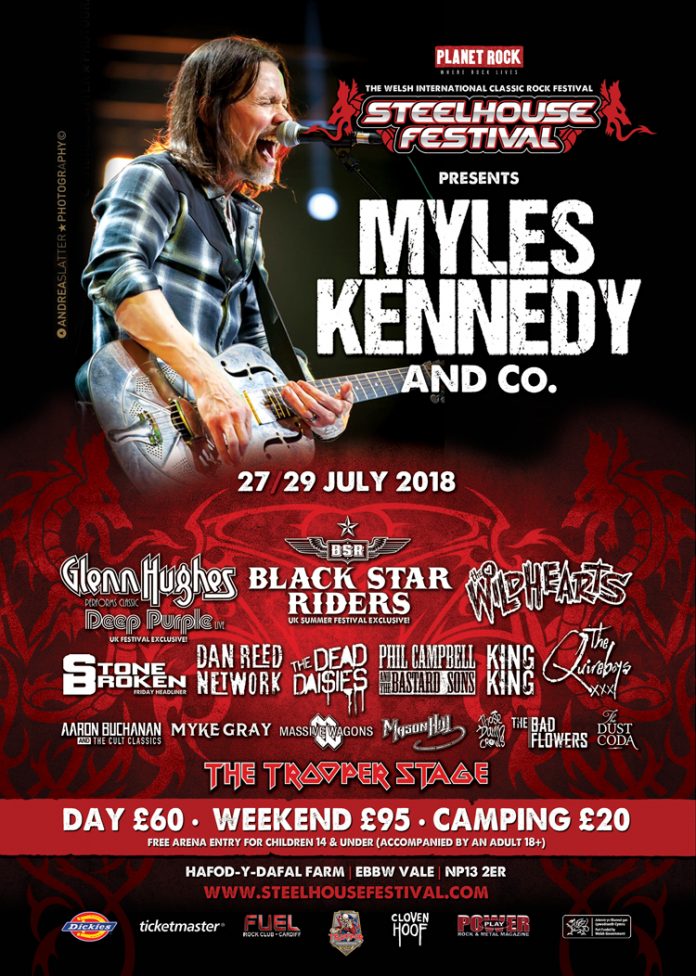 The 8th consecutive Steelhouse Festival, which will take place over the weekend of the 27th – 29th of July 2018, is delighted to announce that Myles Kennedy and Co.will join this year’s amazing line up.  Myles Kennedy and Co. will be co-headlining the Saturday night with Glenn Hughes, with both acts performing full sets.

Having performed with Alter Bridge, Slash and graced many of the world’s finest festival stages and arenas, Myles Kennedy is revered as one of the great voices of rock and as a true artist with nothing to prove.  2018 saw the release of his debut solo album, ‘Year Of The Tiger’, and will also see his debut at Steelhouse Festival.

Myles Kennedy said, “I’m more than excited to make my way up that mountain road and see everyone at Steelhouse Festival. I’ll get to see my good friends Glenn Hughes and Dan Reed. And don’t worry, I’m bringing the sun!”

Promoters Mikey Evans and Max Rhead said, “We are hugely excited to have Myles Kennedy and Co appear at Steelhouse Festival this year. He is one of the finest contemporary rock singers in the world. The songs he’s recorded with both Alter Bridge and Slash are already modern rock classics and his solo work really shows what a truly exceptional musician and song-writer he is. Having him co-headline Saturday 28th July with a full band and show alongside Glenn Hughes with his own Classic Deep Purple set means the vocal power on offer at Steelhouse this year is simply beyond formidable… The album is ‘Year of the Tiger’, but at Steelhouse 2018 it’s the ‘Year of the Singer’, no question..”

Once again Steelhouse Festival have put together a killer line-up.  With co-headliner Myles Kennedy joining Glenn Hughes and the likes of Black Star Riders, The Wildhearts, Dan Reed Network, Phil Campbell & The Bastard Sons, The Quireboys, King King, Stone Broken and many more, 2018 is going to be a true spectacular!