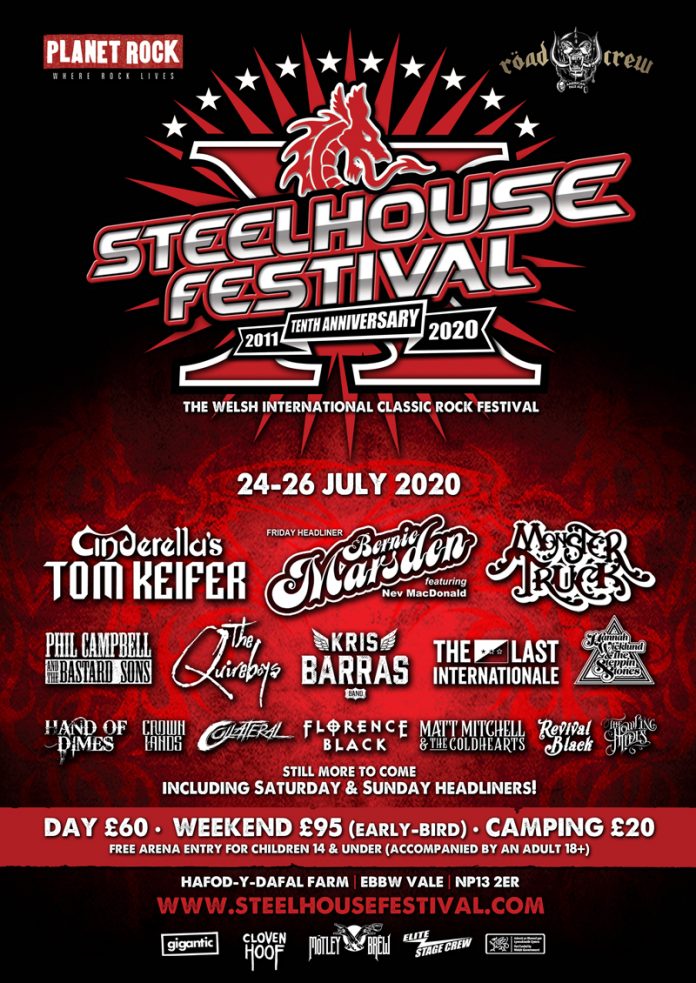 Steelhouse Festival 2020 will be a truly special one, it marks the 10th anniversary celebration. Some old friends will be welcomed back to the top of the mountain!

Running from the 24th-26th of July 2020, the Welsh international classic rock festival celebrates a decade of decibels on top of its now infamous mountain top location in South Wales.

Bernie Marsden said, “I’m so looking forward to driving up The Mountain again in July! The outdoor training and weatherproof clothing are more than worth it to play on the Steelhouse stage for you great people of South Wales and beyond! Happy 10th birthday to you all at the Steelhouse Festival! I’m so happy to be a part of it’

Whilst the classic acts are well represented, Steelhouse always has an eye on the horizon, and this year is no different.  Collateral and The Howling Tides will be making their debuts on the back of stellar live shows around the country and serious airplay on Planet Rock.

Steelhouse does not neglect its location or roots and there is strong Welsh representation this year. As well as playing with Bernie on Friday, Neville McDonald will also be fronting his band Hand Of Dimes on Sunday afternoon.  The hotly tipped, Florence Black – recently seen leaving every last drop on stage of the sold-out Those Damn Crows tour – will be laying waste to the Steelhouse stage on Saturday afternoon.

Promoters Mikey Evans and Max Rhead said, “This 10th year is a true milestone for us. To get here as an independent is quite something. It seems right to have some bands back that really have made the journey with us. Bernie Marsden, Neville McDonald and the Hand Of Dimes are more like Steelhouse Family members. To not have them play the 10th anniversary would have meant a large part of the heart of the Steelhouse not being present. You want your best mates with you at your milestone celebrations and that’s what those people are to us’

Similarly, coming full circle with the Quireboys is just brilliant. 10 years after they had the brass balls to come and headline a first year festival on a Mountain in Wales, they return as the perfect party starters. Cheers boys!

10 years is quite a milestone, especially as an independent that’s been steered by two school mates with no previous festival experience before Steelhouse. We were and still are lifelong rock fans who came to the conclusion that festivals happened all over the world so why couldn’t it happen in our home town. We were naïve, ambitious and knew exactly the sort of festival we wanted to attend ourselves. That naivety stood us in good stead. We pushed on regardless – if we knew what was in front of us perhaps we would have never entertained the idea. We’ve been blessed with an incredible team of people who come from all walks of life for the common purpose of putting on the best festival we can in a part of the world many thought it could never happen in. Sometimes it been joyous, other times extremely tough but we can look back with a sense of pride in terms of the acts we’ve brought to our unique location, the community that’s been created and what Steelhouse has become.”