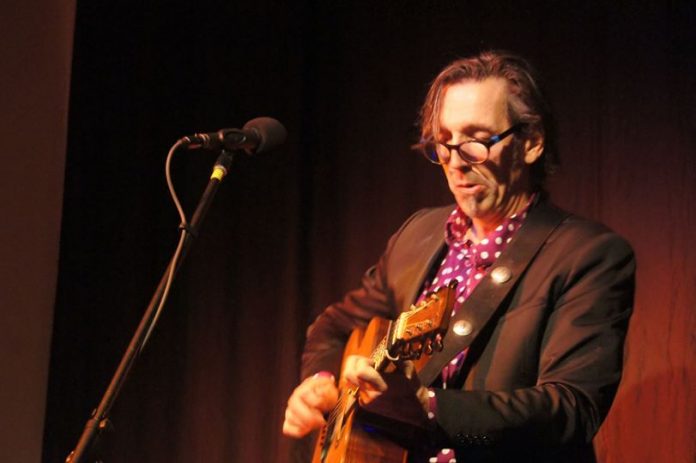 Stephen sails into the Staffs Moorlands

When you’ve voluntarily driven across Canada to start a new life with your family, navigating your way to a beautiful little village on the Staffordshire/Derbyshire border probably isn’t that much of a problem. Nevertheless, that’s what Stephen Fearing did and that’s where Stephen Fearing is tonight.

He’s here primarily because he’s got in his pocket one of the best albums of 2017 so far. “Every Soul’s A Sailor” is singer/songwriter stuff par excellence, but he’s actually here to do so much more than that. He comes with superb one liners (“the sat nav’s in Canada are brilliant. Turn left….in 500 miles” is how he talks his move across country), he’s a gifted musician, but above and beyond that, he’s got a total mastery of his craft.

A gig that is split into two parts (when, after all, will the raffle get done otherwise?) with the first 50 minutes or so heavy on songs from “….Sailor”. Here, played as solo acoustic, they arguably have more power.  “Red Lights In The Rain” conveys a real sadness, while MV’s two real favourites from the record, “Blowhard Nation” and “The Things We Did” are perfect vignettes  for the modern age. The former is as superb a condemnation of the man Fearing refers to as “Number 45” and “Twitler” (that’s – gulp – the leader of the free world to me and you) as you will hear , while the latter is, on the surface,  a song  about the death of a small town obituary writer, but the line “with a click of the keyboard everything changed” seems to have so much more significance.

The songs from previous outings, such as “These Golden Days” belong in this company too, and there is little doubt that Fearing is deserving of every accolade and award he’s ever received (and there have been many).

The second half deals with a lot of his history too, as one of Blackie And The Rodeo Kings, Fearing has been part of one of the great roots rock bands – even if they are, as he puts it here “one of the most dysfunctional bands on the planet”.  A fine version of “Everything I Am” and an even better one of “Black Sheep” are all the proof that is needed to show that here.

In fact, the varied work that Fearing has been part of really comes to the fore in this section. “Long Walk To Freedom”  to celebrate the release of Nelson Mandela and the gorgeous title track from his new album with its poetic imagery: “I look up to the night sky, pure infinity” are poles apart but all work perfectly.

As does the encore. He plays “Beguiling Eyes” – one of the first songs he ever wrote – and the guitar work at the end is mighty.

Often compared to others, and yes there are elements of Richard Thompson, Nick Lowe and Elvis Costello here, Stephen Fearing is actually a one of a kind. He lives on the road both because he’s extremely good at what he does and, dare we suggest, he’s so steeped in music that he wouldn’t be happy any other way.

Just be glad that his life on the road as an artist saw him find his way here tonight. No doubt, though, that the journey continues.

Photograph taken from the Alstonefield Village Hall Facebook Page. Go there to check out their other musical events.