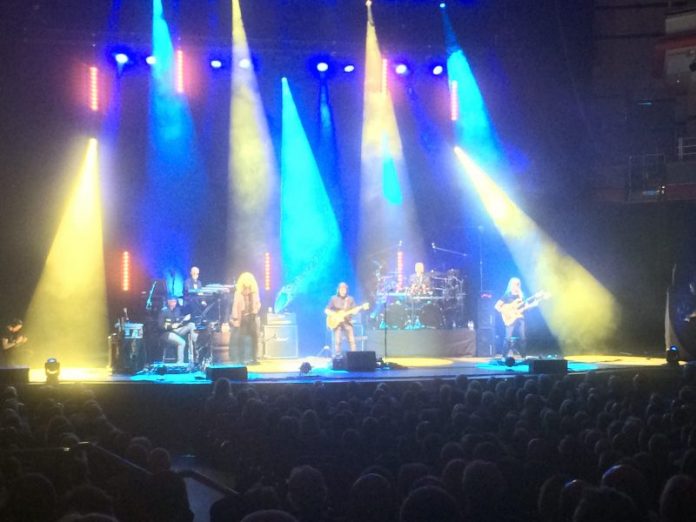 Steve is back, and this time it is windy….

A Steve Hackett tour has been one of the highlights of the rock year for some while now, and the renaissance of one of the finest guitarists and songwriters we have has been wonderful to see.

What had started as the idea that he should bring the work of Genesis alive again and give it to an audience that might never have seen it – like MV – and also an audience that was patiently waiting for its return, has morphed – as all great things do – into something a little different.

This has happened, primarily, because of the two astonishing solo albums Hackett and his incredible band have released in the last 18 months. Both “Wolflight” (which there is nothing from tonight) and the recent “The Night Siren” collections have married prog to world sounds as the outer boundaries have been explored.

Which brings us around to what makes tonight – and other recent Hackett gigs – so special: this is very much the melding together of three different worlds. The contemporary and the glorious past of Hackett but also the past of Genesis too.

First, the present. Split into two sets, “Every Day” starts off complete with a fine twin guitar solo from Hackett and Amanda Lehmann, and there are a number of “…..Siren” songs, given their head. “Behind The Smoke” – poignant given its concern for refugees – and the instrumental “El Nino”.

His brother John appears for a run through of “Serpentine Song” – a track concerning their father – and, although this is billed as a Hackett solo show, the band are key to its brilliance. Roger King is fabulous on keyboard, Nick Beggs is the perfect foil elsewhere and Gary O’Toole is superb on the kit, while Rob Townsend plays just about everything as well as providing a sense of ebullient fun.

The first set concludes with its undoubted highlight. “Shadow Of The Hierophant”, which Lehmann lends some fine vocals to, gives the whole of that aforementioned band chance to show their skill and the ovation it receives is well deserved.

The presence of Nad Sylvan for the second set can only mean one thing: Genesis. Sylvan is perfect for this, given that he could probably find the drama in pouring a bowl of cornflakes, and as such has no problem in turning these lines into an almost cinematic joy.

The “Wind And Wuthering” record being 40 years old at the tail end of last year is all the excuse needed for a set heavy on those songs, and they sound spectacular. “Eleventh Earl Of Mar” – as on the album – kicks off and “One For The Vine” follows, but all must give way to “Blood On The Rooftops” which – with O’Toole on vocals – is remarkable.

Hackett airs a personal favourite from the era too, “Inside And Out” might not have made the finished collection, but it is a centrepiece here and signals the switch to a couple of Genesis classics from other periods. “Firth Of Forth” and a brilliant “The Musical Box” end the set, before a gleeful encore medley of “Slogans/Los Endos” finally brings the curtain down.

Such is the level of skill onstage, jaw dropping technical wizardry is almost a given. Where Steve Hackett and his band score, though, is they deliver this with warmth, and nothing here is cold and clinical.

Just because excellence is expected, that doesn’t mean it isn’t worthy of praise and with cameras filming this, tonight will become one for the ages.