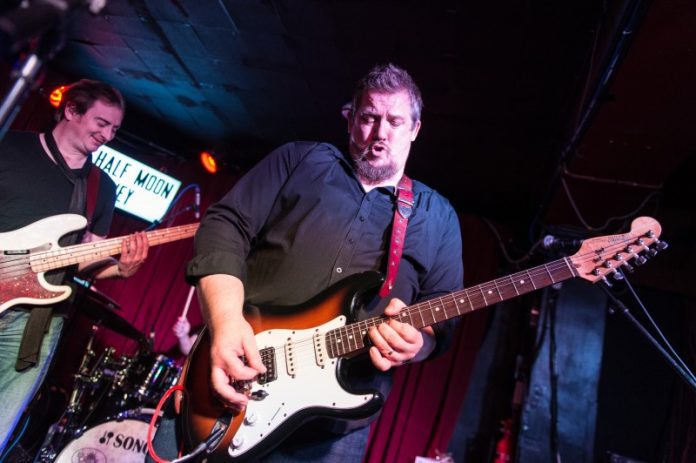 Two gifted bluesmen with new albums due. What’s not to love?

As Glaswegians often do, Stevie Nimmo sums it up with the minimum of fuss. Coming on second on the latest show on this co-headliner, he simply says: “I lost the coin toss ladies and gents, and I had to go on after Ben, the wee bastard.”

And yet probably even Ben Poole would agree that he doesn’t look like your archetypal withered old blues man. Onstage here with his immaculate hair, ripped jeans, tattoos and fashionable t-shirt, he rather gives the the air of being in one of those shouty modern metal bands that are elsewhere on MVM.

Such a thing is evidence that first, appearances can often be extremely deceptive, but second and rather more important, is the thought that the blues is perhaps universal in a way that no other genre is. And touches people like no other form of music.

Not for nothing is the young Londoner called names by Stevie Nimmo, championed by the likes of Jeff Beck and it wasn’t without good cause that Gary Moore took him under his wing before he died.

That tragic passing is marked here tonight by “Time Might Never Come”. Dedicated too – and inspired by – the legend who left us six years ago yesterday. The song, from Poole’s new album, deserves the epithet “stunning” as the guitarist cuts loose with an incredible solo, but although the highlight, is merely the jewel in a pretty thrilling crown. Whether it’s the funky opener “Let’s Go Upstairs” the classic blues of “Win You Over” or the thumping “Somebody’s Lying To Me”, it’s all expertly delivered by four men who are clearly gifted musicians. Stevie Watts on keyboard and organ is used expertly throughout. As “Stay At Mine” ends his hour, the title of Poole’s aforementioned new opus keeps coming to mind: Time Has Come. It will, surely, be prophetic.

Stevie Nimmo is sharing a rhythm section with Poole, which means Matt and Craig Bacon are busy men tonight, and in another similarity with the other member of the bill, Nimmo has a new record on the way.

“Sky Won’t Fall” – released in early March – is a belter of the highest order (MVM will have a review of it publishing towards the end of next week) and Nimmo clearly thinks so too, given that six of the eight tracks he plays here are from it.

Ordinarily this would present an issue with an audience who had braved the Sunday night wind and rain being faced with songs they don’t know. Not here, it’s back to thing of blues being a universal language like no other – that and the not inconsiderable point that work like “Roll The Dice Again” “Still Hungry” and “Change” is of immense quality.

Nimmo too, has an everyman kind of easy charm about him, gregarious and chatty onstage, he tells the story of how he annoyed his brother Alan while writing “Running On Back To You” (“he’s a jolly big guy, but he loses his temper really quickly”) the song is worth a little family row, too.

When he dips into the back catalogue it’s for “A Good Day For The Blues”, one of his own, and for a brilliant cover of “The Storm” from late Glasgow blues star “Big George” Watt, which is lovingly played and includes a fantastic solo.

Things end as you guessed they would, with Poole and Watts returning to the stage and the five men jamming to their hearts content on Jeff Beck’s “Going Down.” It’s a pleasure to watch them bouncing off each other and it makes for a phenomenal end to a show that frequently matched up.