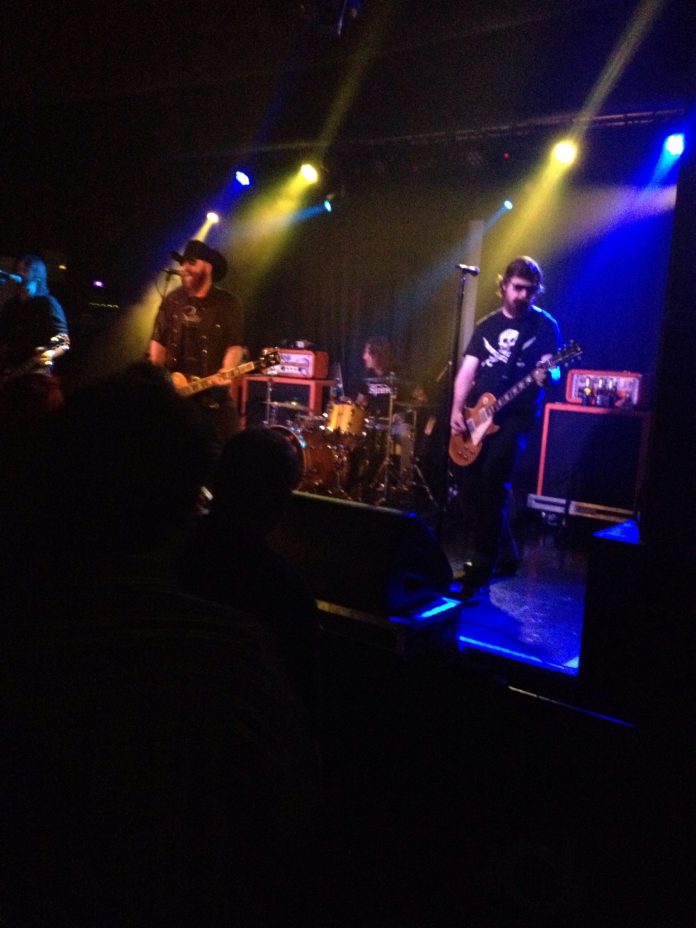 “Can we have the house lights down?” Enquires Deadcuts singer Mark Keds. Maybe he thinks we are ugly. Maybe he thinks they are ugly. Either way, the lights remain resolutely shining brightly while the four piece are onstage. Keds has been around in, amongst other bands, The Senseless Things (who had a phenomenal song called “Christine Keeler”) and was in the Wildhearts for a couple of months back in the mid 1990s. He has lost none of that ear for angular melody. Even more gratifyingly he looks almost exactly the same as when we last saw him, as part of a band called Jolt opening for Three Colours Red. “Mary Disorder” is perhaps the pick of their tuneful arsenal. They have to cut their set short due to the journey from London but they are worth checking out. If you remember the cool stuff of about 20 years ago, then rest assured so do they, closing track “Your Desire” is almost steeped in Cool Britannia.

Let’s cut straight to the chase on this one. The Trews are a fantastic rock n roll band. The new self titled album (given away free with Classic Rock over here) merely carries on the work of last full-length “Hope And Ruin” and cements this idea. However, the Canadian’s are very much in your-next-favourite band category. That is to say, why they remain something of a well kept secret in the UK who knows? Tracks like “What’s Fair Is Fair” and a brilliant “Oblivion” which features some excellent guitar work from John-Angus McDonald, deserve to see them gather punters by the boatload. They save the best for (nearly) last as “Poor Ol’ Broken Hearted Me” sounds simply enormous (and gets bonus points for featuring a cowbell). If you want a band with no pretensions and who deliver nothing other than a promise to play timeless, classic rock, then ladies and gents The Trews are here for you.

About half an hour into their set The Supersuckers force of nature Eddie Spaghetti asks the crowd a simple question: “It’s Wednesday isn’t it?” Upon the answer of yes, he thinks for barely a second before deadpanning. “Well if we try hard we can make it seem like an ok Friday.” The thing is when you call yourselves The Greatest Rock And Roll Band In The World, you are either being deadly serious or taking the piss. There is no in-between. The absolutely glorious thing about The Supersuckers is that nobody knows which it is.

What is certain is this this: tonight is is the last UK date and their 27th show in 27 days. Lesser bands would wilt but Spaghetti and his various mates have been doing this for 25 years and for far from growing old gracefully the band have just stuck out an album in “Get To Hell” that is dirty, scuzzed up, potty mouthed and absolutely marvellous.

The band know it too, as they begin tonight with three of it’s tracks. The title track is one thing, “Fuck Up” and “High Tonight” are quite another. Simultaneously sounding exactly like you’d expect and brilliant all at once, the band are sort of like Motörhead would have been if Lemmy had been American.

What that means is quite simple. Like Mr Kilminster – and Slayer, AC/DC and Status Quo for that matter – The Supersuckers care not a jot for trends. They have made punk’n’roll-with-a-country twist for so long that they can wave a middle finger to anyone who doesn’t like it, cuz bub, they ain’t changing. Like “….Hell” itself says “are you picking up what I’m putting down.” You suspect it’s a threat not a question.

Songs come and go at breakneck pace, but unlike some outfits with punkish intentions The Supersuckers deal in fully formed pieces – it just so happens that they don’t need to be long. Choruses fly by, solos are a blur, but it all works.

“Gluttonous” for example – Eddie’s somewhat unique take on the deadliest of sins – is perfect here, while you suspect that if some of the songs here might a touch less than honest, the toxic boogie shuffle of “Evil Powers Of Rock And Roll” is written from the heart, while the down home “Creepy Jackalope Eye” is reminiscent of ZZ Top on speed.

Elsewhere we find out Wouter the tour manager might as well be the subject of “I Want The Drugs” and amongst many glorious moments comes a cover of Thin Lizzy’s “Cowboy Song,” Before their signature tune “Born With A Tail” ends things in the fiery depths.

If we may quote Mr Spaghetti, “the fucking fucked up leader of this fucked up band,” he might well be, but crickey, under that Stetson and behind his dark glasses, there lurks a master songwriter, and tonight The Supersuckers showed they aren’t too shabby live either. The Greatest Rock And Roll Band in the World? Possibly. But then they’ll be the judges of that.