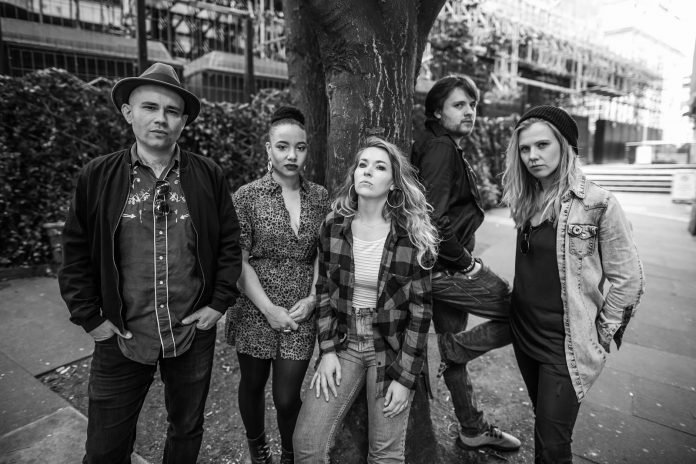 New on the scene, but by no means new to the industry, The Outside Chancers are a force to be reckoned with.

Collectively, members Dan, Jen, Natalie, Dave and Sian have more musical credits to their name than most artists could hope for in a lifetime. Bringing together their individual talents as part of a bodacious alt-country rhythm and blues quintet, the band have been dubbed ‘Johnny and June… but darker’.

Songwriter and guitarist Dan’s collaborations include recording work with Guy Fletcher (Mark Knopfler, Dire Straits) and Mark Collins (The Charlatans). He has had music featured on popular ABC TV Series, Nashville, as well as performing vocals and guitar for Nashville artist Logan Brill. Not to mention keys for the brilliant homegrown CC Smugglers. Drummer Sian is also a familiar face on the scene, doubling up as the drummer for UK Americana favourites The Wandering Hearts and The Worry Dolls.

Adding even more strings to their bow, vocalist Jen has performed alongside bands such as The Vaccines and Billy Ocean with keyboard player Natalie regularly touring as a backing vocalist for Goldie. The latter can also boast her own top 10 album release as a solo artist. Fifth member and bass player Dave is a multi-instrumentalist who has performed with everyone from Vanessa White (The Saturdays) to Louise Bartle (Bloc Party).

Ready to dip their toes into the vibrant country and Americana scene thriving in the UK, the band are set to release their first single The Cloud Bursts on 14th June. Dripping with attitude and a raw foot-stomping quality, the track has already been championed by Baylen Leonard on his Front Porch show at the end of last year. Now to be released as an official single as the band head out for a summer of festival performances, The Cloud Bursts is set to be a popular anthem for country and Americana fans alike.

“If we’re being unimaginative the song is just the weather forecast – whatever anyone makes of it’s probably right. I don’t want to ruin it for anyone! I had in mind this phrase that’s a curse in some cultures – ‘may you live in interesting times’. And I think we do. It’s probably about rising tensions, between two people or many people…” – Dan