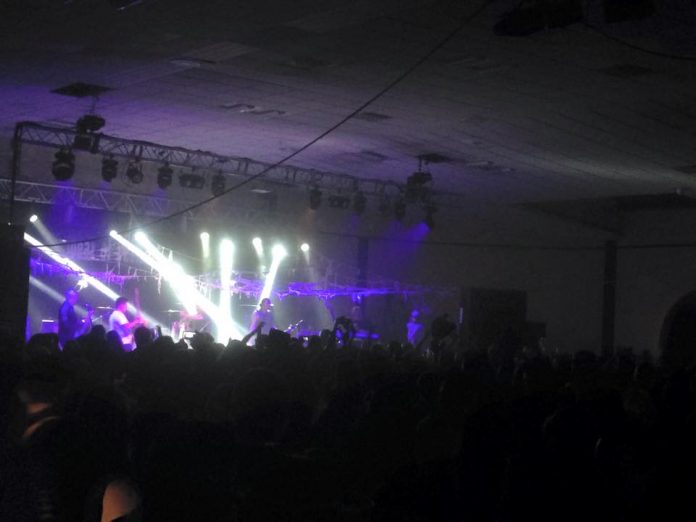 Lene Lovitch and Therapy? head the list for next April

As Whitby Goth Weekend subdues from its rattling crescendo this Hallowe’en, we can now present the April 2016 line up to the world, and, staying true to its ever enduring mission for diversity and raw entertainment, Whitby Goth Weekend have prepared a sumptuous platter catering to a wide variety of palettes and appetites – with a hefty plastering of femme fatale and a series of catchy riffs served up on silver (under some neon spotlights).

After the 21st Birthday festivities there’s no intention to cut the engine, and April 2016 is expected to be just as high octane, and, above all else, entertaining – if perhaps rattling for purists.

Whitby Goth Weekend prides itself on catering to all subcultures and tastes, and seeks celebration of the movement and its roots every step of the way. The result is a bi-annual line up of what influenced Goth, what’s come from Goth, and, perhaps most importantly, what will get an audience of Goths moving – and Steampunks, Punks, Bikers, et al besides! You all know Goth music, we all know Goth music – we provide music to dance to. For 2016, we expect to see pointy shoes, cuban heels and New Rock boots kicking up a storm.

It’s Goth, Jim…but not as we know it.

Calling upon a wide spectrum of Grunge, Alternative Rock and New Wave, this veritable pandora’s box is now open, and you lucky people will be among the first to see it…

Hands Off Gretel
Girl grunge served up in pastel tones. Headed by the veritable talent of Lauren Tate, Hands Off Gretel are testament to the DIY edge that brought Grunge to where it was. Hand drawn, hand painted and hand plucked from the industrial landscape of Sheffield, the group are building a sizeable following that insists on growth with every performance.

Lene Lovich
One of the leading figures in the early New-Wave scene, Lene Lovich is still providing her unique – and leading light – of post punk forty years on. Critically acclaimed, one of the first New-Wave artists to hit the top ten and still carrying all of the energy she’s said since day one, Lene is long overdue on the Spa Stage – and now we’ve got her, we’re certain she’ll bring something special to the line up!

The Red Paintings
Only a year since their first visit to Goth Weekend, The Red Paintings were in heavy demand to return; and it’s little wonder. An artistic show of various mediums, the group not only indulge in requesting audience members paint on stage, but perform with all of the bravado and surrealism of an Italian Opera. Feudal Japan, electric violin and grey aliens are the status quo here – and are guaranteed to make a memorable, inimitable performance for the ages. After a sumptuous live tour this 2015, taking on as far afield as Japan, there’s  huge demand for them to return – and we’ve delivered!
http://www.theredpaintings.com/

Therapy?
Critically acclaimed, genre bending and carrying a legendarily skewed sense of humour, Therapy? are a prime alt-metal outfit if ever there was one. Selling over two million records worldwide, stepping onto stages at Sonisphere, Hard Rock Hell and playing alongside New Model Army, Biffy Clyro and more, they’re a melting pot of numerous inspirations and resources, from punk rock to pop, which, after twenty six years, still garner a dedicated fanbase and respectful tips of the hat from critics around the world. This is their first time at Whitby Goth Weekend, and we’re confident it won’t be their last!
http://www.therapyquestionmark.com

She Made Me Do It
This electronic duo are sultry, indulgent and represent all of those traditional rock and roll values in a variety of keyboards and strumming guitar. With connections to such big bods as Adam Ant, Rachel Stamp and Flesh For Lulu, they’ve all the experience of a legend and all of the enthusiasm of somebody fresh on the scene.
http://www.shemmdi.com/

Rhombus
Rhombus are a big, big band. They’ve all the manpower of a decent football team and are one of the biggest guns in the British Goth arsenal – deservedly. Hugely passionate, soulful and simply a fixture of the Goth Weekend experience, they’re a group that’s difficult to stop watching and impossible not to respect.
http://www.rhombus.org.uk/en/

Fuzzbox
After the sad loss of Jo Dunne, an influx of media attention has meant Fuzzbox are back on the minds of the masses; now is the time for them to put that back onto the Pavilion stage. For a second time, Fuzzbox have reunited- and for a second time, they’ll be attending the Spa to give their ever-colourful repertoire a thorough workout for one of the only audiences that can challenge their own eyeliner. Fuzzbox are still just as infectious as ever they were, and their catchy, synth heavy-tunes will bring back the 80s in greater quantities than one could manage with a DeLorean. https://www.facebook.com/OfficialFuzzbox

Wayne Hussey
While perhaps better known as frontman of The Mission and Dead Or Alive, Wayne Hussey is still carving out a very respectable solo career. Since dumping the idea of record labels with the release of his latest solo album, Songs Of Candlelight & Razorblades, the amount of liberation in his performance is evident. Atmospheric and passionate, emotional and soulful, he’s a bit different to our usual closer; and without a doubt worth every second. Meanwhile, of course, The Mission are celebrating their 30th anniversary, and we are hearing the distant, anticipated rumbling of a birthday tour…
https://myspace.com/waynehussey
http://www.themissionuk.com/

As ever, Whitby Goth Weekend is an all ages event. We welcome – nay, encourage – families to attend and introduce the next generation of alternative music fans. With concessions for kids and families alike, there’s no reason to leave anyone behind!

Now in its 22nd year, The Weekend is still one the largest and most successful independent, home grown festivals in the UK – and is continuing to attract world-renowned talents. Whitby Goth Weekend is estimated to produce a whopping £1.1million for the town’s local economy per annum, and  has generated thousands for charities such as the Bat Conservation trust and the Sophie Lancaster foundation.

The event is celebrated as an icon of the alternative movement, having been studied, visited and explored by television, newspapers and radio over the years, and has, despite all this, remained utterly independent throughout its run. Growing voraciously from its origins as a forty-person pen-pal meet up in 1994, it now attracts thousands from all over the globe, not only to wander among like minded folk, but as a colossal meet up between friends – all from word of mouth, with no sponsorship and no outside funding.

After two decades, the team is still built of friends and family, all in house, and the town now handles between 8,000 and 10,000 people a year, drawn entirely by the spectacle of top hats and tailcoats roaming the town’s Victorian streets.

Diversifying every annum, the event attracts all manner of subcultures, with a melting pot of the alternative population now making regular appearances and meetings to the sounds of a hugely varied series of groups, all of which, in some way, have influenced, or been generated from, one of the world’s most recognisable movements – Goths, punks, steampunks, Rockers, Bikers and more – everybody is welcomed!

Tickets are available now, starting at £18, with concessions for under 16s and families.