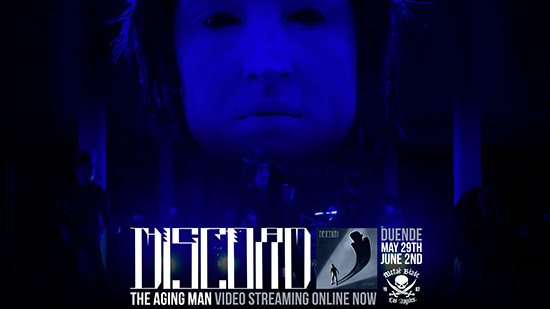 The Great Discord have just released “The Aging Man” Video via Metal Injection.

One of the most unique things about THE GREAT DISCORD is their visual presentation. This has been showcased so far in a series of four video teasers that can be viewed HERE.

Today, the band further expands upon their intriguing and mystifying visuals with a new video for the song “The Aging Man“. The video was directed by Philip Kullgren and edited by Joakim Sjöholm, both from Pellen Productions. Prog is premiering the video today. Check it out here: http://prog.teamrock.com/news/2015-05-20/the-great-discord-issue-aging-man-promo

“The video is a mix of a presentation of our band, and a visualization of the concept behind our song, The Aging Man. The idea is that a man, facing his mortality, struggles with his impending death, here personified by Fia’s stage persona. Acting as a sort of inverted Saint Peter, or Charon, she is a gatekeeper, a guide, challenging his thoughts and beliefs about what is going to happen, and forces him to face his demons and his regrets. The game of chess is a symbol for this struggle. Welcome to THE GREAT DISCORD,” says the band about the video.

Revolver Magazine is streaming the song “L’homme Mauvais.” Check it out HERE.

Duende will be available worldwide on Metal Blade Records on June 2nd in North America, June 1st in the UK / Europe, and May 29th in Germany, Austria, and Switzerland. Listen to the first single “Eigengrau” and pre-order your copy of Duende now at metalblade.com/thegreatdiscord. Sample The Great Discord‘s striking visuals, which will be a big part of their live show, on their official YouTube channel HERE.