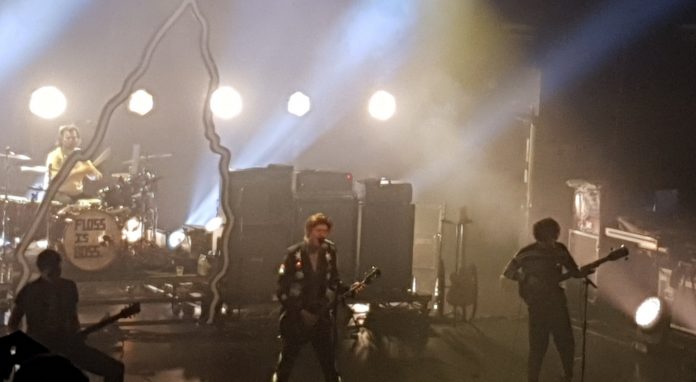 Let’s get this said from the off. There’s no point in waiting for the conclusion. This is not a bombshell, just a fact.

The Amazons are going to be huge.

This was the only conclusion to draw actually, from the minute you heard the “Future Dust” album in the summer. It was huge. It sounded like a statement, but at the same time, it never actually gave a monkey’s what anyone else thought. It knew. The band knew, that was all that mattered.

The interesting thing about this right from the minute the intro tape starts – a monologue from Bruce Springsteen’s live tour where he talks about a “band being a communion of souls”, this feels special. This feels like exactly what it is. A young band who are embarking on their biggest ever UK tour – tonight is the first date – and whom obviously plans to wring as much out of it as they very possibly can.

The songs are primed and ready. “….Dust” was brilliant. It deserved the accolades, but here “Fuzzy Tree” and “Mother” (the order is swapped from the one on the record) seem shot through with a little more energy, a bit more electricity, and I am struck too, by just how downright heavy this is in the live area.

I am surprised too, at just how many people know the stuff from the first record, like “Stay With Me”, if often when a band starts to break through, they get the hangers on, then not here.

And, it doesn’t matter really, where they pick from, they find something mighty. Whether its “25” a standout from “….Dust” or “Palace” from the debut, then it goes down a storm. It is just one of those nights.

“Palace”, though, is worthy of discussion, because it shows – rather like “25 (Reprise)” a little later – their versatility.  Matt Thomson plays it on the piano, and like the acoustic tones of the latter, then it is a long way from the rest.

“Georgia” is another that sets TA apart. Most bands of this type don’t do solos like this. I saw a band last week who “guitar players don’t exist like they used to”. No one told Chris Alderton, because he is first class here, he really is.

“Dark Visions” – another choice speck (sorry!) of “….Dust” is sandwiched in between a couple that they elongate with snippets of other songs. There’s been a feeling all the way through that they don’t quite fit in with the hip indie kids, and not many of them would do “In My Time Of Dying” (I am a miserable old git so I still think Mark Lanegan perfected this….) and at the end of “Little Something” they have a bash at “Helter Skelter” and “Iron Man” amongst others.

The encore is about that “communion” that Springsteen talked about. “Junk Food Forever” doesn’t really need Thomson, the crowd got this for you and “Black Magic” sees the four jam as if they can’t quite believe it – or don’t want the night to end.

“This afternoon,” the singer had explained earlier in the night, “We walked past The Sunflower Lounge. We played one of our first gigs there, now we are here three years later….”

The Sunflower Lounge for anyone outside of the second city, holds about as many people as a bus shelter. This is their journey in one sentence. The Amazons have it all to go a lot further yet.