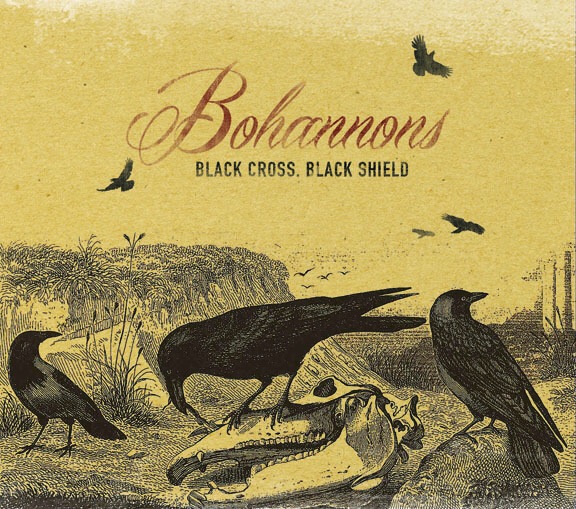 On which, your favourite new band from Tennessee deal with the dark side

In the build up to the release of this record Marty Bohannon, who along with his brother Matt forms the backbone to the band that bears his name said: “There is a theme to this album and it’s not death. It’s the beauty of death and memorialising the departed with electricity and force.”

A bit of a distance from Motley Crüe’s “Girls, Girls Girls” huh?

“Black Cross, Black Black Shield” beats strongly with a dark heart. The title track, which is also the opener to the album, is a classy, confident cut and one which sees the protagonist of the lyrics overcome with an unspecified illness “don’t tell mom I’m feeling down, don’t tell mom I’m sick” comes it’s plaintive cry. On “White Widow” which follows, the theme is regret: “who’s to say you’re satisfied, just because you’ve lived and died?” asks it’s chorus, not unreasonably.

That song is typical of many on this superb work. If you just want to enjoy it as a piece of superb music that is in places reminiscent of Springsteen at its darkest or the brilliant shoulda-been-huge  Philadelphia mob Marah, then you can do just that very nicely, thank you, but dig deeper and “…..Shield” just keeps on giving.

“Eyewitness Blues” is a brooding piece of rock n roll – perhaps the heaviest thing here, the countrified “Love Stunt” is worthy of Johnny Cash at his most cantankerous, “Death And Texes” is emotionally draining while “Darkest Night” , with it’s brilliant first line becoming, almost the perfect summing up of mental illness “how can you be lonely, when it’s standing room only…..?”

It is “Dias De Los Meurtas that is the highlight amongst many, though, a glorious dark vignette with huge intentions, it’s a ballad to dream of. It is run close by the wonderful heavy blues of “Red, White, Black And Pale” which brings the curtain down. Harmonica wails, musicians seemingly do what they like and play independently of each other, and yet it all works outstandingly well.

The same can be said for the album itself. “Black Cross, Black Shield” shines as something of a gem.