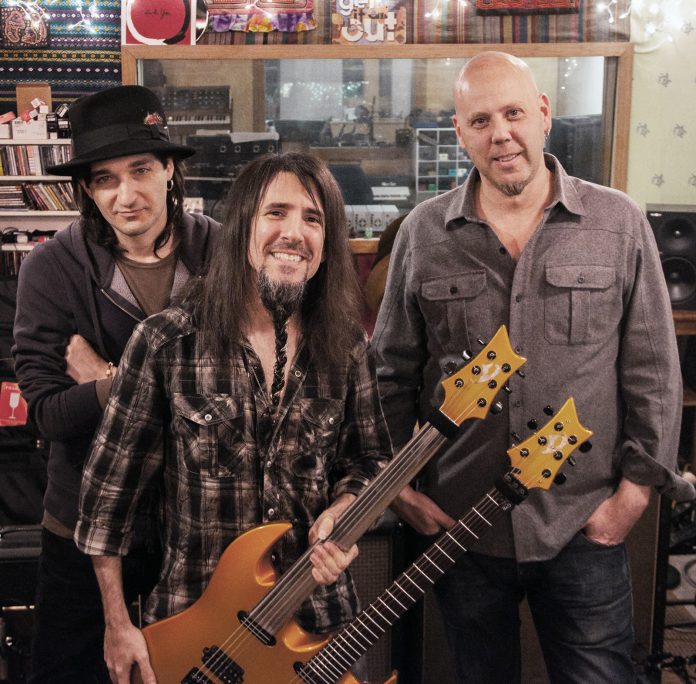 From camping out in the recording studio with an army of killer New York
musicians to racing around England and Germany on a co-headlining tour with
CRYBABYS front man, Darrell Bath (DOGS D’AMOUR, IAN HUNTER, UK
SUBS), 2018 has been a busy year for COMPULSIONS leader, Rob Carlyle.
“I had a blast on the road with Darrell,” says Rob. “It’s rare for me to have that
much in common with another musician. But musically speaking, we were two
peas in a pod. Anyone who brings Now Look by Ron Wood on tour is all right by
me! And after one of the German shows, I’m told someone on Facebook called
us ‘The Two Greatest Rockers from Each Side of the Pond.’ So, I guess we did
all right (laughs).”

But now that he’s back home, Carlyle’s been back in his second home: the
recording studio. The New York-born front man has been putting the final
touches on Ferocious, the follow-up to his wildly acclaimed band’s sophomore
effort, Dirty Fun (2015) – a release music scribes spilled much ink over as they
favorably compared the underground underdogs to legendary artists such as
AEROSMITH, THE NEW YORK DOLLS and THE ROLLING STONES.
“The recording process has taken longer than I expected but then again, we had
about thirty tracks in the works,” explains Rob. “And it wasn’t until recently that
we narrowed them down to the ten songs that’ll be on (Ferocious). But on the
flip side, with the other 20 or so tracks already in progress, we have a great head
start on the next couple of albums.”

As he continues to tinker with producer Ken Rich at Grand Street Recording,
Rob springs a second Ferocious teaser video on the unsuspecting public.

To quickly backtrack: The first clip was unleashed in late 2017, featuring
upcoming ditty, “Dirtbag Blues” – an obscenity-laced spurt of back alley sleaze
with none other than Earl Slick (yes, DAVID BOWIE’s guitarist!) delivering a
rapid-fire barrage of snarling CHUCK BERRY-style licks and riffs. In addition to
Carlyle and Slick, rounding out the “Dirtbag” lineup was ex-NEW YORK
DOLLS drummer, Brian Delaney, and ex-RAGING SLAB bassist, Alex Morton
– a crew Über Rock has since declared a “Punk ‘N’ Roll Supergroup.” The teaser
video with “Dirtbag Blues” can be seen on Instagram here:
https://bit.ly/2AToGpr and YouTube here: https://bit.ly/2yGSEHe
Fast forward to today for the release of a second Ferocious promo clip.

In this latest video, Rob and a seemingly heavily sedated nurse are sprawled out
on a dirty basement floor while Rob strums his battered Telecaster. The music
features THE COMPULSIONS tearing through THE ROLLING STONES’
country-inspired classic, “Dead Flowers”. The “Flowers” recording lineup
consists of two GUNS N’ ROSES alumni, Ron “Bumblefoot” Thal on guitar
heroics and Frank Ferrer on drums, along with Carlyle and Morton in their
respective roles – not to mention gospel-tinged backing vocals by Nicki
Richards (borrowed from MADONNA and MARIAH CAREY) and boozy
barroom piano by Andrew Sherman. The new teaser video featuring “Dead
Flowers” can be seen on Instagram here: https://bit.ly/2av0ATG and YouTube
here:

An official release date for Ferocious has yet to be announced, however Rob
offered this: “I thought we’d release (Ferocious) in 2018, but between working
on almost 30 tracks and the tour dates that popped up unexpectedly, we’re
gonna now shoot for 2019. In the meantime, I hope everyone gets a kick outta
this little clip. And please keep spinning THE COMPULSIONS real loud and
please keep telling all your friends about the band. Rock ‘n’ roll needs your
love… every little bit counts! God bless!”