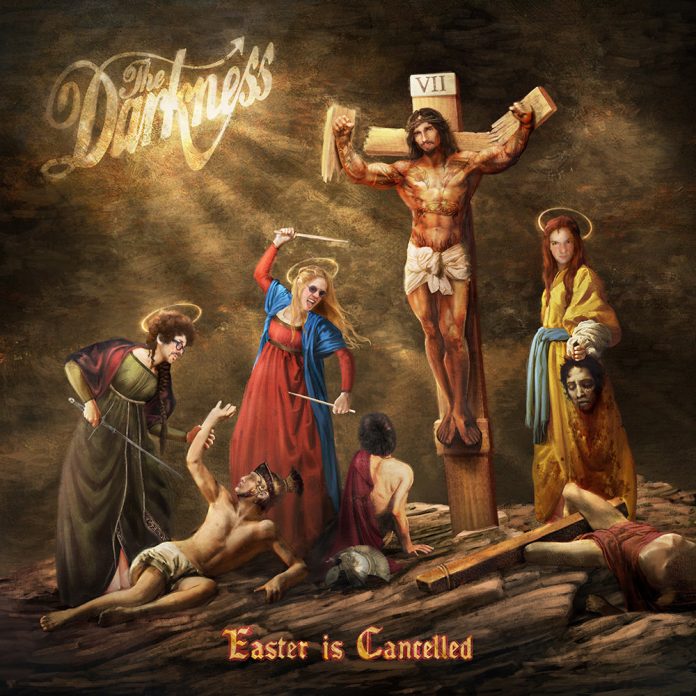 In the Year of Our Lord, 2019, while turmoil and chaos beset the world, a mighty force is about to be unleashed. As the spartan time of Lent unfolds, and society looks set to implode, it’s time to put away your chocolate eggs, say goodbye to the festive bunny and prepare for the sonic apocalypse… for Darkness spreads across the land!

In their inimitable style, as joyous warriors here to prick the pompous and kick the arses of those who seek to destroy us, four maestros embark upon their most ambitious quest to date. With a musical opus of veritable magnum status soon to be thrust into the ear canals of rock fans around the globe, and a tour that will quite literally resurrect the souls of all who attend, The Darkness have a message for citizens of the world everywhere!

As they explain in their hard-hitting video, they are men in tight costumes, ready to fight the power-drunk clowns who cast a shadow of despair across the land. They will not be gagged by the reeking stench of pious indifference that pours from the orifices of these clown-lords.

Watch the unique State of the Nation address HERE as our heroes emerge from the bucolic English countryside to announce that Easter is cancelled! Cometh the hour, cometh the band…

So now, people of the world, it is time join The Darkness in their mission to take back control from the fools and liars who purport to lead us, and instead march forwards into the sunlit uplands of inclusivity, togetherness and rock’n’roll fellowship.

In this spirit of joined up partnership, fans can pre-order The Darkness’ brand new album –Easter Is Cancelled – TODAY and get exclusive pre-sale access to tickets for their brand new tour, which starts later this year. Full tour dates will be revealed next week, and go on general sale on Friday 12th April, but to get the earliest opportunity to purchase tickets, fans who pre-order the album will receive an exclusive link to the advance pre-sale.

Another of the exclusive items available within special fan bundles is a strictly limited edition T-shirt featuring Justin Hawkins as an Easter Bunny. If ordered before April 16th it will be delivered to UK addresses in time to be a very Good Friday gift! And for fans in farther corners of the planet, it will make a magnificent May Day present. Remember a bunny is for life, not just for Easter!

The album will be released digitally and in full technicolour physical glory as a standard CD, digipak CD with bonus tracks, gatefold LP, limited edition colour vinyl gatefold LP and Cassette. The album is available to pre-order now from the band’s Official Store with special signed copies and exclusive album bundle offers.
https://TheDarkness.lnk.to/EICPR

EASTER IS CANCELLED IS RELEASED ON 4TH OCTOBER