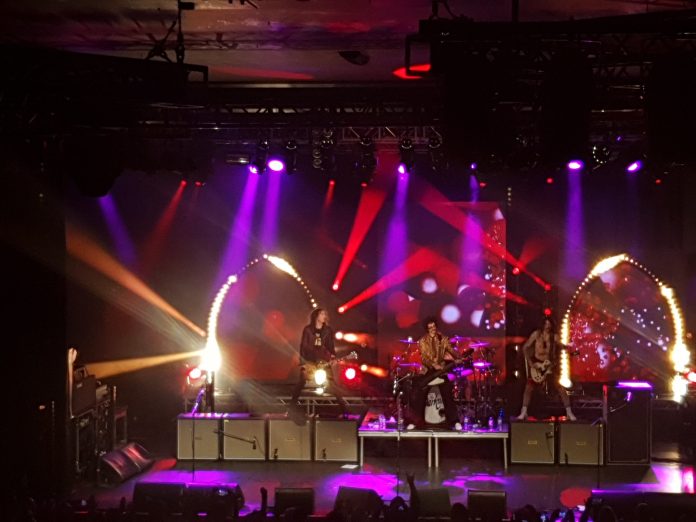 I often like to think of one word in my head to categorise a band I’ve never seen before. For Rews, its simple:  ebullience. The three piece are on this nationwide trek around the country with The Darkness, and they intend, it seems to me, to be get every last drop of enjoyment out of it. Make no mistake about it, though, the three piece aren’t just here on a jolly up, they are here to prove they are a name to watch – and you’d best believe they are. A half an hour that is as catchy as it is crunchy begins with “Rip My Heart” and “Can You Feel It?” (you can) and ends with “Shine” (it does) but in between they impress too, with the absolutely bouncing “Shake, Shake” and the darker “Birdsong”. “Miss You In The Dark” broods a little more than the others too, and proves how much this band have to offer. Part way through the set, impressive singer/guitarist Shauna Tohill – who seems very much the leader of this pack – asks the kind of question bands always do: “Who’s heard of Rews before?” She seems genuinely shocked at the loudness of the response. She – and the rest of the band – are probably have to get used to the increasing adulation. 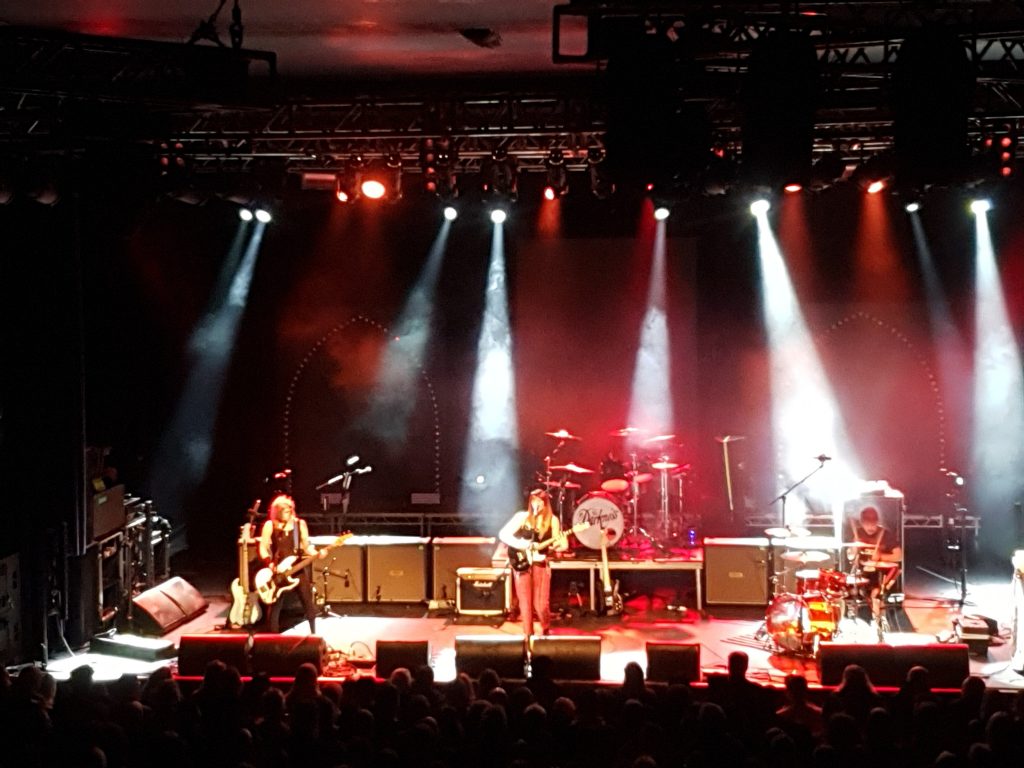 I stick by two things when it comes to The Darkness. The second one we’ll get to in a minute. The first is pertinent to the first part of the set here. “Easter Is Cancelled” – the record they released back in October, is the finest of their careers. Simply because it’s the first time they’ve fully let themselves go.

With it being a concept album too, it makes sense for them to play the thing all the way through. Which they do. And it is fabulous. As OTT as you like, but with such skill too.

“Rock N Roll Deserves To Die” it’s first track, has a bit at the end, with a really high note, and it is when that is delivered that Justin Hawkins appears, and from then, in honesty, this is his gig. He’s just got a natural presence. Like he can’t help being the centre of attention – in short, he’s a proper frontman in a proper rock n roll band.

“Live Till I Die” is very much his song too, family photos behind them as they play, and “Heart Explodes” wonderfully sends up balladry, “Heavy Metal Lover” is extremely heavy (well in comparison to the rest) “Choke On It” is classic Darkness, and the thing is wrapped up with “We Are The Guitar Men” – bombastic on the album, it is stripped down to just Justin and his acoustic here (“playing it is hard work so they’ve left it to me….”) and what an album it is. 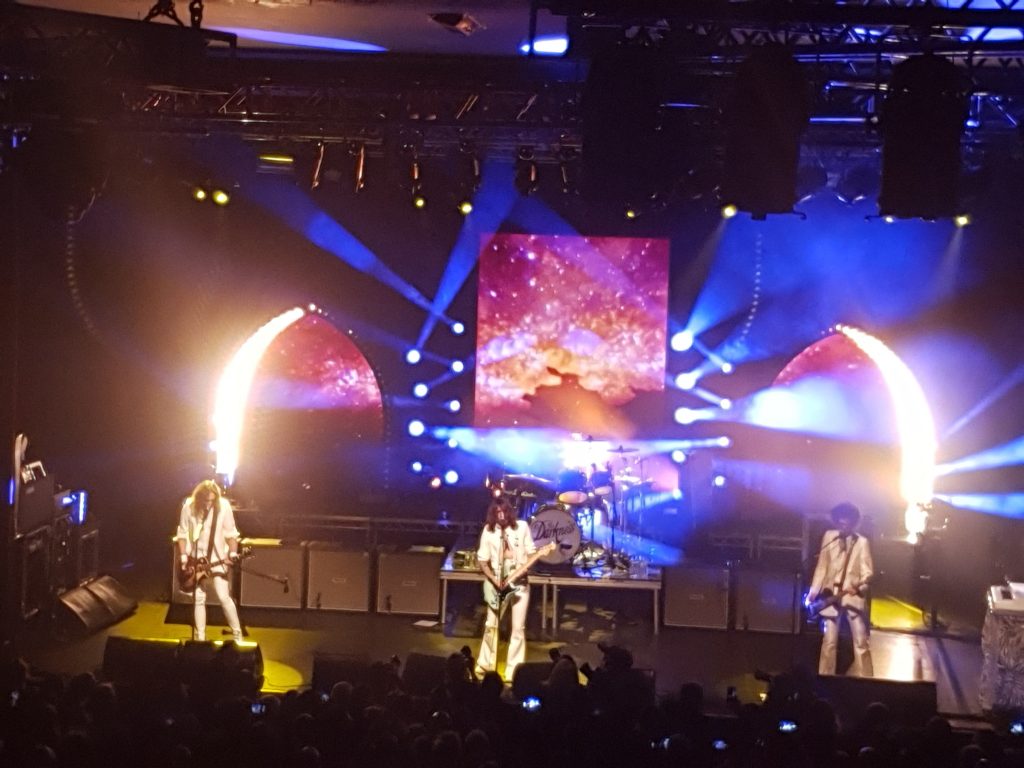 Which leads me to the second thing I will always believe. No matter what, I am unshakeable on this, and if I try (where possible) to keep politics off most of these reviews, then MVM’s manifesto, if you will, is this: “Permission To Land” saved rock n roll in this country.

The Darkness’ debut record was a glitter cannon of hope in a morass of the moribund, and it made it ok to rock again.

Whether you agree with me or not I couldn’t care less to be honest, but if you do, then crikey, you’ll enjoy the second hour of this.   A few minutes after “…..Cancelled” is over, they return with a change of clothes – most are sensible, Justin Hawkins sporting a catsuit – and a stack of hits. 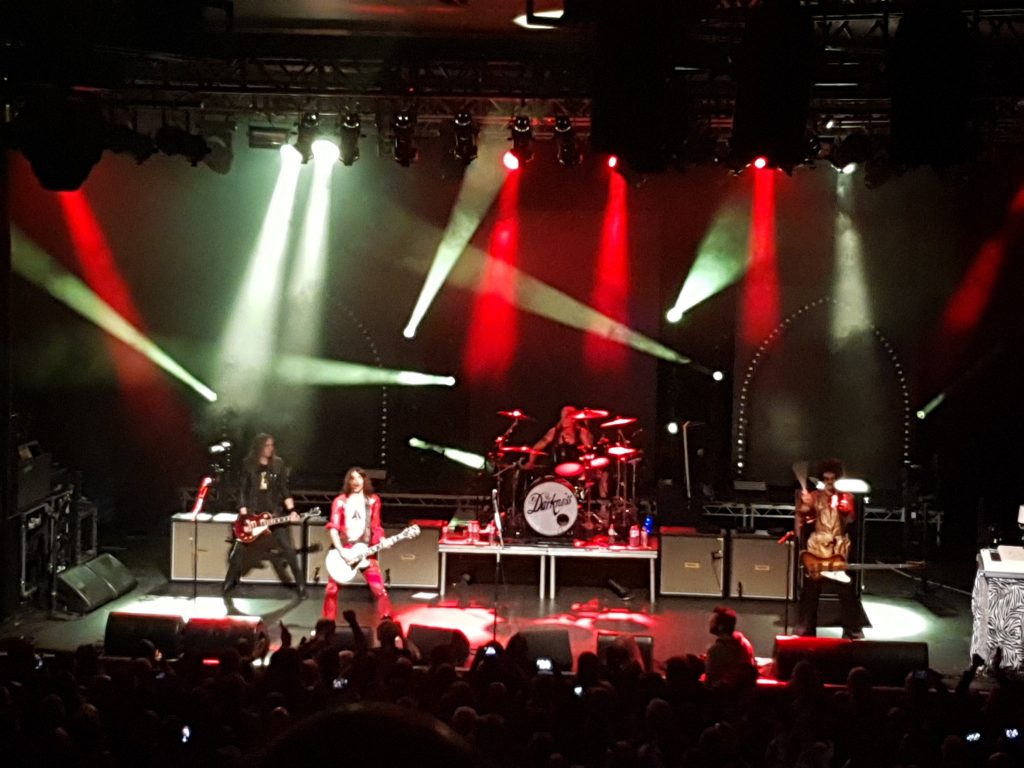 Frankie Poulain, the bass player, emerges with a cowbell to herald “One Way Ticket” which is lovely, but not “Growing On Me” or “Love Is Only A Feeling” or indeed “Solid Gold”, with its chorus, “we’re never gonna stop shitting out solid gold” – and which I’ve never worked out is meant to be ironic or not.

Then they do the last two. “Get Your Hands Off My Woman” and “I Believe In A Thing Called Love”. The former sees Hawkins do handstands on the drum riser, the latter sees 2000 Brummies on a freezing Sunday night go all kinds of crazy.

Then there’s an encore – it is after all what rock stars do – and whether I personally like “Christmas Time (Don’t Let The Bells End)” is largely immaterial, given that a band like The Darkness absolutely should have made one. I am however, much more on the side of “Love On The Rocks With No Ice” during which Hawkins – the singer one, Dan is content to stay in the shadows – gets on the guitar tech’s shoulders and trots around meeting his people.