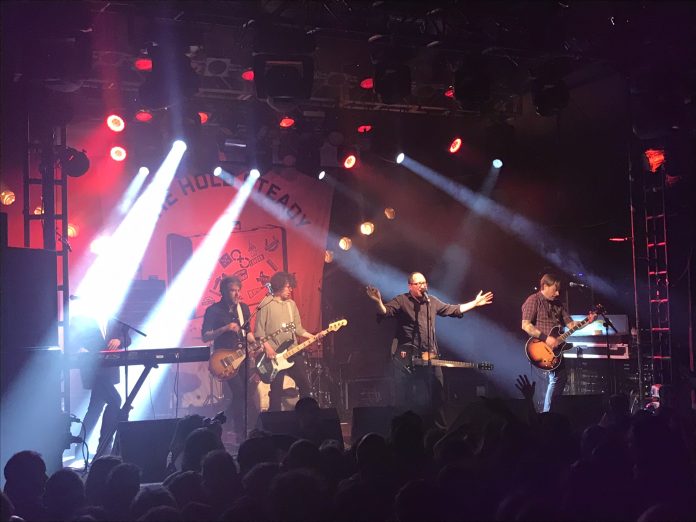 Toronto’s Pkew Pkew Pkew (best band name in ages because it took me about 15 minutes of their set to work out it was gunshot sounds….) look happy to be here. No, actually, make that Pkew Pkew Pkew look happy to be anywhere. Their 30-minute set is about as full of beans as full of beans gets. The Canadian four piece announce: “here’s one about drinking” before they play, “Before We Go Out Drinking” which is kind of helpful, except all their songs seem to invoke a party that never ends. Choruses? Hell yes. “65 Nickels” is a cracker, “The Polynesian” is even better. Both of these are off their literally just released new album “Optimal Lifestyles” but “Glory Days” from their first record clearly suggests they’ve always had the handy knack of wrapping these things round a hook that is ridiculous.  A quite brilliant set is concluded with “Asshole Pandemic” and they all march off, smiling and sweating. To be fair, you imagine they end every gig this way too, and you can also bet they were headed straight to the bar. 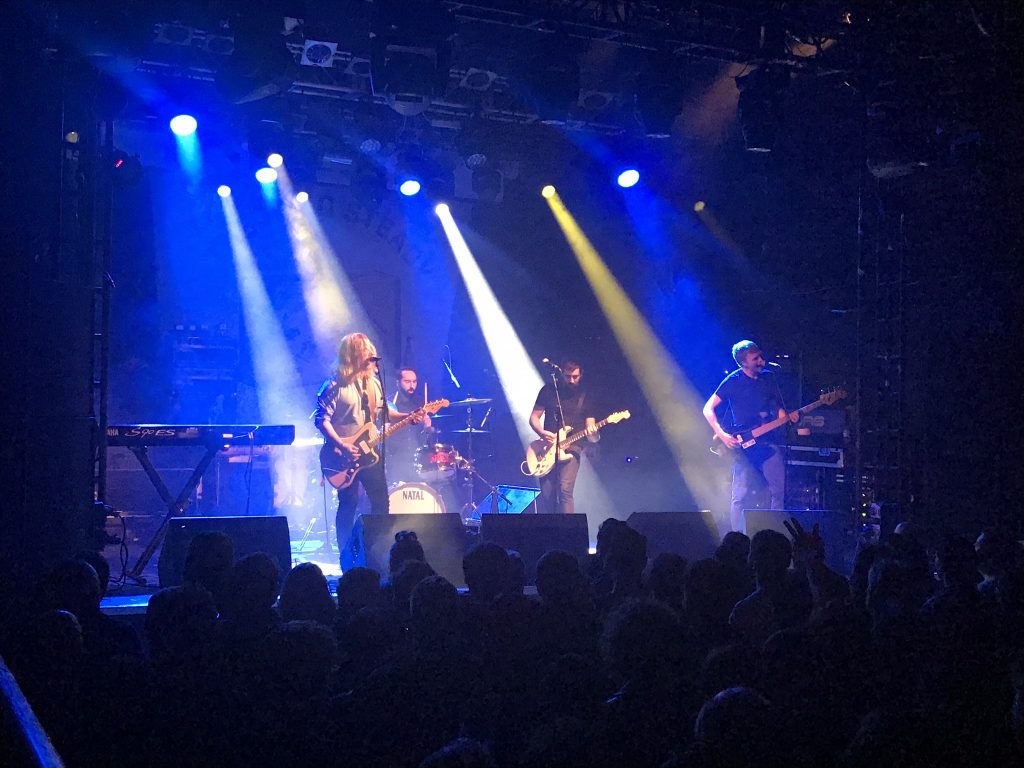 In the afternoon before this gig, Craig Finn, The Hold Steady frontman, tweeted that they were building something special in London.

At about 10.15 he’s stood, arms outstretched, screaming “London, England, that is how a resurrection really feels”. Now, that is ostensibly because the band have just played a song with that name, but I’ll swear to you, it had a deeper meaning. Something magical, almost biblical had happened in this room since 9pm.

It’s as simple as this – and I’ll review the thing in a minute – but I saw Black Sabbath’s last ever show back in February 2017. This was the best gig I have seen since that night.

From the second that “Stuck Between Stations” hits, there is such a euphoria in the room. Songs pass by in a blur, and whilst many of them are from the band’s earlier material, the likes of “Hurricane J” and “I Hope This Whole Thing Didn’t Frighten You” show their newer stuff too.

THS are readying their first new album in five years, and they are able to showcase a new track “Denver Haircut” with Finn clearly excited: “this is the best line up we’ve ever had,” he says, “and I’m something of an expert, I’m one of the few guys that’s been at every show.”

It’s hard to disagree. Franz Nicolay on keyboards is worth the price of admission on his own given that he manages to play his instrument and look likes he’s at a Pilates class all at once and guitarist Tad Kubler is as good as it gets.

And the old stuff? Christ, it sounds good tonight. “One For The Cutters”, “You Can Make Him Like You” are glorious, but then “Sequestered In Memphis” and “Chips Ahoy” manage to find another level on top of that, which is astonishing in itself.

If you’re looking for highlights then you might as well look at the whole thing, but the bit in “Constructive Summer” when Finn suggests we “raise a toast for Saint Joe Strummer” must be right up there, as a collective experience it is off the charts.

Although these songs were born in Minneapolis, there’s something universal about these tales. “city centre’s over,” opines Finn in “Your Little Hoodrat Friend”, and it doesn’t matter where you’re from, the death of the town is affecting us all.

The encores? Well, there’s a point in the encores where rock n roll might just achieve perfection. “Most People Are DJ’s” is that moment, where to paraphrase one of their own tunes, certain songs just get etched into our souls. And right at the end of “Killer Parties” there’s the key to all of this.

Usually that stuff isn’t true. It is here. March 9th is the day that gig of the year gets sorted. Unless someone, somewhere does something as miraculous as this again.