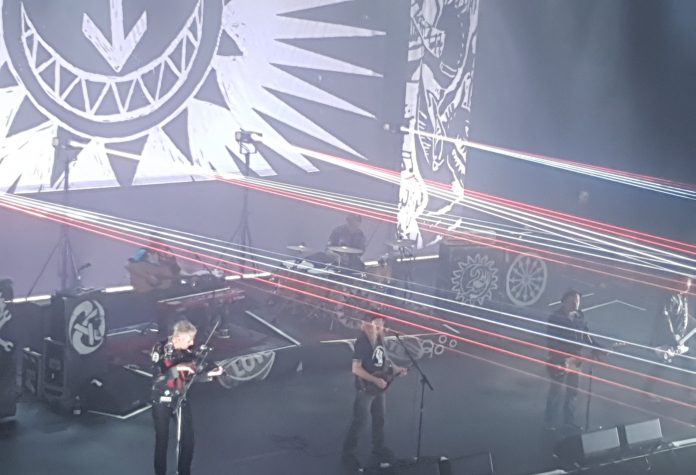 First things first, you can forgive any band for looking around these historic environs and being a bit taken aback. As Dodgy’s Nigel Clark puts it: “We don’t get the chance to play here everyday.” The band have undergone something of a renaissance since returning to the fray a couple of years back. Shows on the Britrock Must be Destroyed tour last year were fun, but now they are down to the serious business of one of those “album” shows. It’s 26 years since their debut record came out. We all got it then, and we all still know “Staying Out For The Summer” now. A 45 minutes (mostly) culled from that record shows that has aged pretty well, and also where modern bands like Red Rum Club get their use of brass from too. In truth – because this is a partisan Levellers crowd rather than one of their own – there is a touch of waiting for the other two hits. “Grassman” hits the spot, too, and….let’s be honest, they were always going to finish with “Good Enough” and it was always going to go down a storm when they did. Both those things happen, and drummer Matthew Priest gets to celebrate with his mum and dad, who are on the balcony watching proudly, so job done all round. 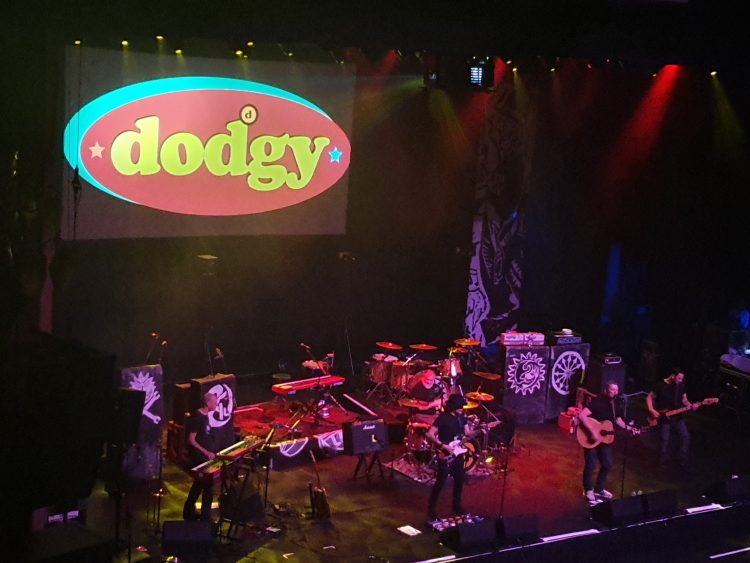 The word “Liberty” seems to have more resonance than ever these days. The Extinction Rebellion protest up the road this week, the Animal Rights protesters around the corner from the venue tonight and the fact that tonight’s show is an event in aid of Mind, the mental health charity, are perhaps just a small fraction of the ways that each of us look for escape, from threat, from pain, from ourselves.

But when guitarist Simon Friend yells the word tonight as a kind of starting gun, it heralds a celebration.

Right from “Liberty Song” to the finishing “What You Know” some 90 minutes later this is a band that knows its sound, its audience and exactly what it is doing.

A varied collection too, the acoustic led “Julie” is superb, and a slightly different set to those outdoor gigs in the summer sees “Too Real” welcomed by the hardcore.

“One Way” is always euphoric – I can’t imagine it being ever being done any other way – and the “hits” if you will, like “Hope St” mix with brand new stuff. “Food, Roof And Family” stood out when I saw it in the summer and that is more stark now.

“Dirty Davey” belies its lyrics to become a rabble rouser, and while everyone here seems to have their own favourite (and it always surprises me just how many different ones there are too) then the presence of “Cholera Well” is welcome to me….

After “Riverflow” there’s an encore. Normally “rock stars” do encores, and whatever else The Levellers are, they are not rock stars. They do deserve a victory lap, however.

“Another Man’s Cause” starts this off, but when “What A Beautiful Day” hits, I look around. People are literally dancing on the stairs. Now, I could be wrong, but I can’t remember that happening too often when Ken Dodd played here when I watched them Sunday night things on TV as a kid.

“What You Know” ends this, and that is an interesting question, because what do you know? This is one of those groups that mean different things to different people and there is no point in second guessing that. There is, though, something we can all agree on, I hope.

The Levellers have a load of great music. And if their natural habitat is a field somewhere, then this corner of London tonight was something approaching a proudly freestanding collective, for just a little while.