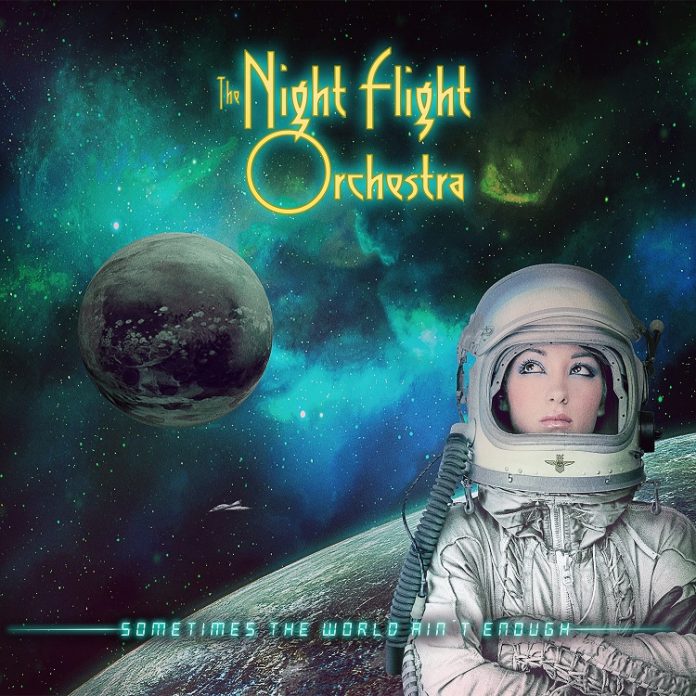 There’s something about these Scandinavian musicians in heavy bands. Not really my scene, all that so I might be on shaky ground here, but all the boys in Enslaved, Entombed and the others seem to want to be in classic rock side projects. Night Flight Orchestra are, of course, another. Formed, as it puts it so well on the press pack that came with this record in the last decade, when Soilwork’s Björn Strid and David Andersson wanted “something that you could listen to when everyone else was sick of listening to Detroit Rock City, Goodbye Girl and Born To Run”.

Over the years NFO have grown way beyond that. Their last album “Amber Electric” was little short of stunning, and this one is cut from the same 70s inspired cloth.

In fact, if anything on “Sometimes The World Ain’t Enough”, they’ve taken everything they’ve ever done and added just a little bit extra, made it a little more OTT. So it is that here, the keyboards parp a bit more, the solos screech a touch further and the harmony vocals are stacked just a little higher than before.

That is all pretty much evident from the off. “This Time” manages to sound epic even though it is under five minutes, coming on like some glam rock take on “Live And Let Die” and you’d best believe it is as catchy as you like.

In many ways, “….Enough” is the album of keyboard player Richard Larsson. His electro pulse is all over most of them, but particularly “Turn To Miami”, a unashamed, slightly pompous – meant as a compliment – AOR thing, and in fact, the best thing, perhaps about this album altogether is that you couldn’t tell it came out in 2018 if you didn’t know.

That is not to say it sounds dated, because oddly it doesn’t, rather that work like “Paralyzed” with its funky bass from the ever-superb Sharlee D‘Angelo (Spiritual Beggars) belongs proudly to a different era.

Likewise the title track doesn’t half sound like Journey – to be fair only when Journey are at their rocking best – and there is an arena rock feel about “Mountains Of Thunder” that wouldn’t be out of place on a Supertramp record either.

“Speedwagon” surely named after REO? Is hard rock the way it should taste, while try as I might I can’t think of a better way to some up the opening to “Lovers In The Rain” than to say it has the air of a theme to a morning TV show.

Actually there’s an impressive mix of styles on this too. “Can’t Be That Bad” is a glam rocker and proud of it, followed up by “Pretty Thing Closing In” which comes on shimmering as a disco ball, for something as hip shaking as The Stones’ “Miss You” and on an album that is as choc full of brilliant songs, then “Barcelona” might be the best. The harmonies on this one are not of this world.

They even manage something a little more understated before the end – “Winged And Serpentine” still has huge chorus and a lead guitar that FM would kill for, but on this record it counts as stripped back. That is not, through, an epithet you can apply to the last song and if the only thing that this collection lacked was a prog rock freak out, then then “The Last Of The Independent Romantics” – all nine minutes of it – remedies that just perfectly.

The whole album is just the sound of musicians doing what they love, with the shackles off and it sounds wonderful. If your fists aren’t in the air throughout most of “Sometimes The World Ain’t Enough” then you don’t deserve fists, in fairness.