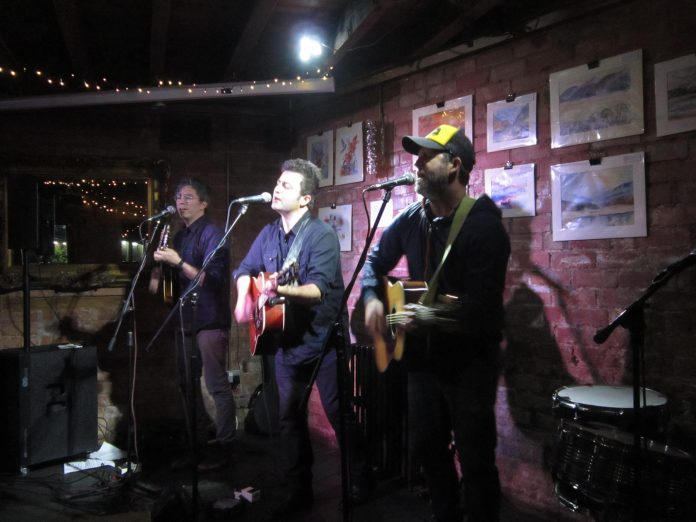 Tonight, was Folk / Americana trio The Orphan Brigade`s first time playing in Birmingham and what a terrific performance the intimate audience were given. The band Joshua Britt, Ben Glover, and Neilson Hubbard have a proclivity to document their songs in some interesting and atmospheric settings. They soak up the spirit and history of the place and transfer it to record. Their debut album was written in one of the most haunted houses in the Southern United States, The Octagon Hall in Franklin, Kentucky. Their second in the mystical heart of the Templar caves underneath Osimo, Italy and their recent offering the guys returned to Glover’s Irish homeland.

Understandably the first few songs came from their most recent release “To The Edge Of The World” with a song about a Spanish nobleman, who drowned off the Antrim coast with  “Under The Chestnut Tree`, title track `Dance With Me To The Edge Of The World` and the haunting `Banshee` which Josh`s mandolin tinges were sublime and Neilson`s steady drum beat gave it an extra otherworldly feel.

As song written about the American civil war follows with `We Were Marching On Christmas Day` before Neilson takes over vocal duties for the hypnotic `Children Of Lir` and Josh for the emotive `Fair Head`s Daughter` Another song from the latest release follows with `Mind The Road` which Ben shares is about the nearest to a political a song he has written about the “Troubles” in his homeland. The first set closes out with a song about a Franciscan friar,  Saint Joseph of Cupertino who had the ability to levitate in `Flying Joe`, `I`ve Seen The Elephant` a heart wrenching narrative of the horrors of war and an ode to a Ghost with the slow burn `Trouble My Heart (Oh Harriet)`

After a short break the fellas return and share the ballad like `Isabella` before another couple of cuts from the new release with `St Patrick On Slemish Mountain` and the catchy `Captain’s Song (Sorley Boy)` which on record they managed to get John Prine to add a vocal section, as Josh and Neilson worked with him on a video. The boys had the enthusiastic audience joining in with the chorus towards the end of the tune.

A track from the first album follows with `Pale Horse` before `Alchemy` and `Mad Man`s Window` a sad tale of lost love in which the beat is a little reminiscent of `Not Fade Away` whilst the harmonies from the guys is delightful. `Sweetheart` with the superbly hypnotic and compelling lyrics of “Don`t Take My Sweetheart Away, Don`t Take My Children Away” closes out the evening. The troupe are encouraged to return and do so to serve up a captivating version of recently departed Daniel Johnston`s `True Love Will Find You In The End`

This was a very entertaining evening with a trio who are wonderful songwriters, accomplished musicians and storytellers and can all sing. At times the songs shared touched many emotions due to either the uneasy nature or sheer pleasure of the narrative.

This evening`s performance was indeed a joy to behold.