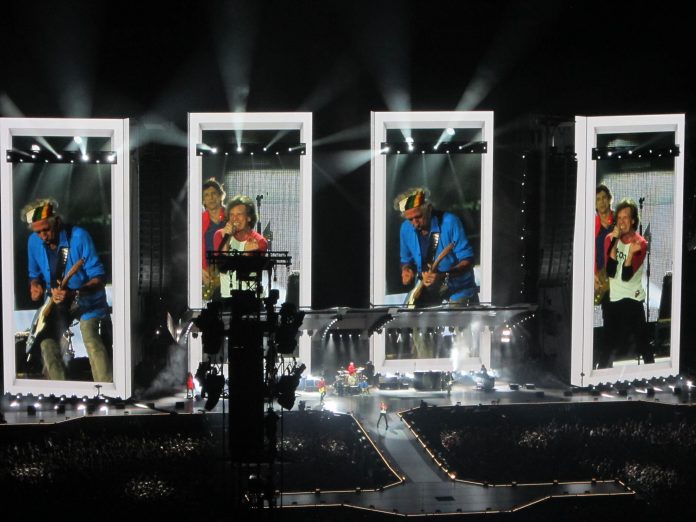 Well, the larger than life icons that are the reason for our visit to the Welsh capital, thunder in on what is titled the `No Filter Tour`. A trek that began on 9 September 2017 in Hamburg, Germany and is scheduled to conclude on 8 July 2018 in Warsaw, Poland. It`s nearly twelve years since their last appearance at this same venue during the Bigger Bang tour in 2006 and, for me personally, it`s almost 35 years since I last saw them in London`s Wembley Stadium with The J. Geils Band and Black Uhuru.

There`s still a little sunlight creeping through the open roof of the stadium as the lights darken and the screens flicker into action and there`s definitely a perceivable buzz of anticipation as the band hit the stage.

It`s a real lump in the throat moment when I blink and there before me are Jagger, Richards, Wood and Watts pulverising us with the opener `Street Fighting Man` quickly followed by `It`s Only Rock `n` Roll` and `Tumbling Dice`. We get time to take breath as Mr Jagger tells the crowd: “We’ve been coming to Cardiff since the early 60s, since 1963. We’ve done loads of gigs here, but our most famous one was one that never happened.” “Well, Cardiffians, I want to congratulate you, you’re back in the Premier League,” “We’ve been having a lovely time in Cardiff doing all the cultural things we always do. We hired some bikes and cycled to the museum and saw Renoir’s blue lady”. “Then we went to Caroline Street and had a chicken curry, washed it down with a pint of Brains. But here we are, still standing!”

Our leader then enthrals us with not just his singing but harmonica skills with a track off 2016`s covers album `Blue & Lonesome` with the Little Walter number: ` Just Your Fool`. The hits keep on coming with the dark and broody `Paint It Black`, then an audience voted for request with `Get Off My Cloud` and Dylan cover `Like A Rolling Stone`. “I hear you’re good at singing around here,” jokes Mr. Jagger as he lifts a guitar and shares a stripped-back version of `You Can’t Always Get What You Want`. The singer gets chance for a breather as the man once labelled as mad, bad, and dangerous to know, Keith Richards, steps up to charm us with a couple of numbers: the bluesy `You Got the Silver` and rocky `Before they Make Me Run`. Jagger returns and introduces the engine room of the band with Watts, Wood and Richards getting a chance the bask in the deserved spotlight. Ronnie Wood is introduced as “Doctor Who’s new companion”, Keith Richards gets a deafening cheer and his name chanted as if we are at a footie match and when Charlie Watts is introduced as the JPR Williams of the drums, you can feel the real love that the crowd has for this oldest member of the troupe. He seems to be enjoying the spotlight a little too much as Jagger jokingly reminds him that “There’s a curfew!” We head into the home stretch of this two-hour, non-stop party and unsurprisingly, the hits keep coming. `Sympathy For The Devil`, a cracking `Midnight Rambler`, `Jumpin` Jack Flash` and the wonderful `Start Me Up` amongst them. We also get a mind-blowing version of `Miss You` with bassist Darryl Jones playing some stunning licks and smashing the song right out of the stadium. A cracking replacement for Bill Wyman, who was still treading the boards, last time I saw these boys. The show closes out with `Brown Sugar` and we all get a little breather before screaming and demanding an encore.

We are duly rewarded with a couple of songs and the first of which, to me, was the stand out song of the evening `Gimme Shelter` with Jagger duetting with the supremely talented backing vocalist Sasha Allen, trading lyrics, competing, almost duelling on this classic. The lyric of ‘just a shot away’ bouncing around my subconscious long after the show. Understandably the event closes out with the band`s trademark song `(I Can`t Get No) Satisfaction` and after a bow from the band and supporting cast, these septuagenarians take their well-deserved leave and we are left feeling drained but extremely contented.
I am so pleased that I decided to purchase tickets for this show as despite all the sniping about age, these fellas put on a show that would put bands a third of their age to shame.
The band supported The Everly Brothers on their first Cardiff visit in 1963. They had a ten-minute slot opening that concert, which also included Little Richard and Bo Diddley, at the Capitol Theatre on 6 October. I`m not sure if tonight, we witnessed their last visit. The screens carried their trademark lips logo and the statement see you again, so who knows.

But what a stunning evening.

Still there`s only one way to sum up this night and in words that the band created “It`s Only Rock n Roll But I Like It !!!”