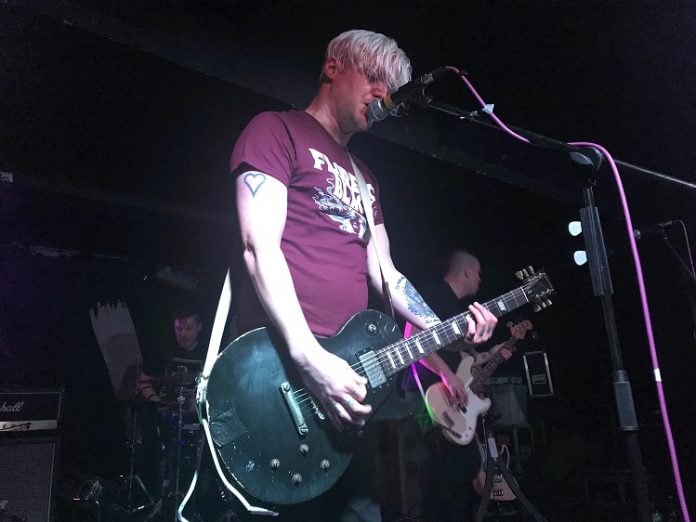 Virginmary’s bass player, Rob Massey actually nails it during his bands set when he yells, pretty excitedly: “did you all see Blue Nation? What a band!” He’s not wrong, isn’t the boy. A hometown gig this might be for two of the three BN lads (Chris on drums is from up the road in Codsall, so I dunno if we can grant him immunity?) but they don’t betray any nerves whatsoever. Instead Neil Murdoch is keener to praise Florence Black (“the guitarist was playing Audioslave at soundcheck, I just want him to be my new best friend), but rather more than that, this calmness is most likely because the dapper trio know they have got tunes in their back pocket to do this job with ease. Songs like “Innocent” make good on their evident desire to be melodic modern and yet rooted in the classics, while the closing “Down To The River” is perhaps their best. Confidence, really, isn’t a problem generally for Blue Nation, but the singalong from the crowd here just merely reaffirms what they already know. Blue Nation have got something.

Florence Black come at it from a different place altogether. Like all the bands here they are a trio tonight, but that’s to be honest, where the similarities end. Because the three piece from South Wales have just that little air of danger – like it could all go wrong at a moment’s notice – that always makes for some real excitement. “Ghost” doesn’t, let’s say, ghost in, it announces itself. And asks what you are going to do about it. Moreover they are not about to defer to anyone. Tristan, who sings and plays guitar as if his life depends on it, roars his way through, “Fiesta” and “Ride” and the more stoner “Smoke” changes the pace a touch, but only so it can crush a little more. Perry is one of those drummers who appears to be so pissed off with his kit he’d like to beat it to death and with Foz on bass matching the power, it is pretty formidable. It is skilful too, given that “Johnny”, written about John Lennon reveals a touch more melody. A performance that was superbly unhinged, ends just like that as this Merthyr based triumvirate plays Breadfan” by another Welsh band, Budgie, and do it justice. Ones to look out for, because you imagine Florence Black could go to a lot of places and the ride might be all kinds of fun. 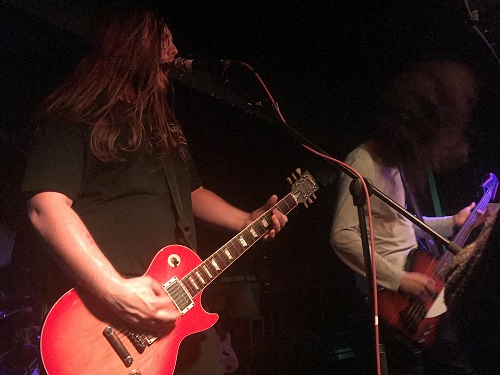 I happen to look at Virginmarys drummer Danny Dolan, as they play the brilliant “Into Dust” towards the end of the set here. The sweat is rising from the kit at every beat, and he looks more than pleased with himself.

Which is why, when singer Ally Dickaty repeats a couple of times that this is the best venue they’ve played on the tour, you think he just might mean it more than the usual platitudes.

For one thing, The Virginmarys are very much proudly independent and for another when Dickaty says the words he is dripping with sweat himself. This, surely, is the kind of night The Virginmarys do it for?

Having not seen them live for a while, it is striking how much more urgent, almost punk, they’ve become. 80 minutes or so is all they need to rattle through songs at something approaching breakneck speed, but also it is all they need to prove that they have a body of work to be hugely proud of.

“The Northern Sun Sessions” released late last year is probably a career high for them, and TV are here to play most of it. “Get Me Back Home” actually starts the set and is one of a clutch of the new ones that have fitted in so brilliantly.

But across the piece they play something from all parts of the last decade. The fuzzy, more indie work of “Sweet Loretta” mixes with the youthful exuberance of “Portrait Of Red” from the debut, while “For You My Love” takes on a life of its own that it never quite had on the studio record.

Current single “SOS4UNI” deserves to, and has designs on, playing much bigger places than this, as does “All Fall Down”. But it is a couple in between that actually underline what Dickaty says about the spirit of the band right now. “We couldn’t be here if it wasn’t for your support of what we do….” he suggests and it is striking that all around me there are people who are as into “Just A Ride” from the first album as they are “Look Out For My Brother” from the last. This is a band who has taken their audience along with them, its fair to say.

And on this tour they don’t feel the need for encores either. Rather the brooding new one “Eye For An Eye” jostles with the early “Bang Bang Bang” for supremacy.

Having seen The Virginmarys over the years, I think it is fair to say they probably haven’t ever been better – and whilst you can reflect that they deserve so much more, there is just a feeling that being this independent beast doing what it likes, really agrees with them.