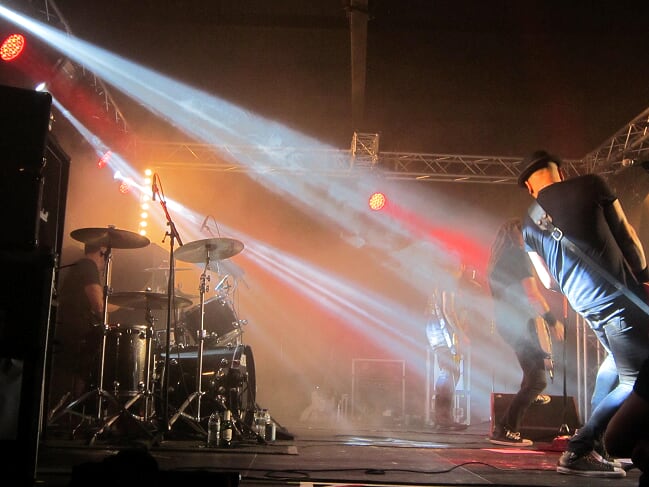 When what is your favourite band plays what is most likely your favourite album of theirs (to be fair in the case of tonight’s headliners I can never quite make up my mind as to whether it’s their debut full length or second that I prefer) then to be honest, you’d have to be a damn good support act to get noticed.

Ferocious Dog, my friends, are a bit better than good. Straight out of Nottingham, they’re armed with a fiddle, a punk rock attitude and some left-wing leaning songs – and if you’re thinking “like the Levellers?” you’d be half right, because it is my contention that there’s nothing about the boys from Brighton that is quite this visceral. “The Glass”, “Criminal Justice” and “Too Late” are proof that rock music with a social conscience is alive, well and kicking against the pricks as hard as ever. “Black Leg Miner” – dedicated to those in the battle of Orgreave – is especially important given that singer Ken Bonsall was himself a former mine worker, and another song is dedicated (as they always do, to Ken’s son Lee, who tragically took his own life due to PTSD). The violin of Dan Booth informs most of the songs, but especially “Johnny I Hardly Knew Ya” (given a new lease of life here), while “Hell Hounds” is just great fun and the closing, sprawling “Slow Motion Suicide” is a vicious take on the state of the country, dedicated to Jeremy Corbyn. A truly magnificent set, the sort of band that you’d say would be ace at a festival – that is if they weren’t so good now. And all with Les Carter (Fruitbat from Carter USM) looking as happy as can be stage left. Ferocious Dog are magnificent here. 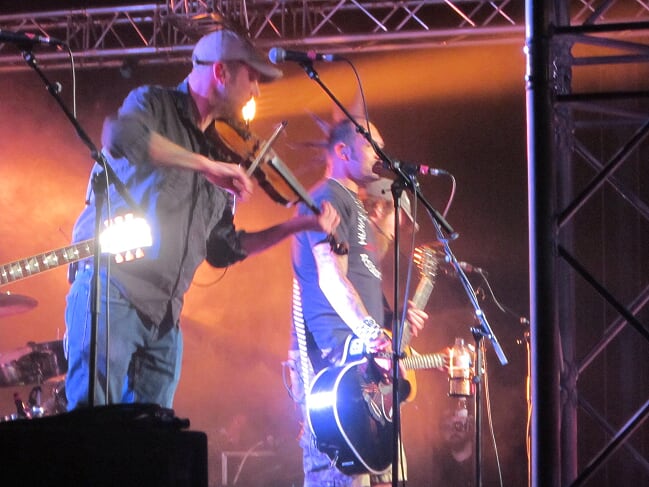 And they needed to be, because half an hour after them, its time for The Wildhearts. The band who in many ways weren’t allowed to quit, by the fans who continue to pack venues out every time the four get back together.

Tonight they – and we – are here to celebrate their Earth Vs The Wildhearts album. It really doesn’t feel this old, but as their frontman Ginger puts it this evening: “25 years, eh? Fucking hell.”

By the time he says it, they’ve played three songs. A trio which proves why we all got so excited back then. Has any band had their gift for melody, outright heaviness and these lyrics, the words that mean so much? I am saying not.

That opening salvo, “Greetings From Shitsville”, “TV Tan” and “Everlone”, they’re staples of every Wildhearts gig (whether an album one or not) so you get them without really thinking, but it’s the “Shame On Me”, the “Loveshit”, “News Of The World” and “Drinking About Life” – the ones they don’t always play – that remind how incredible this was. And is.

Everyone tries to join in with “Caffeine Bomb” (no one nails it) and everyone thinks of whoever they think of when “Miles Away Girl”, “My Baby Is A Headfuck” and “Suckerpunch” come around. It all ends, with “Love You Till I Don’t” and it really is one of the greatest collections ever and whatever the trials and tribulations, both professional and personal, that these men have had (not for nothing does Ginger look at Danny McCormack on bass and say, “you’re just glad to be here at all, aren’t you?) then they’ve got this unbelievable chemistry.

They aren’t done, either. The crowd – as it now seemingly has to – does the “Don’t Worry ‘Bout Me” chant, before they come back for a romp through 40 minutes of greatest hits including “Vanilla Radio” an absolutely glorious “Red Light, Green Light” and “Anthem” (Danny belts it out from his chair and the fact he’s still in love with the rock n roll world is obvious).

Then it ends as ever with “29xThe Pain” the b-side that the fans essentially made a classic by demand, and “I Wanna Go Where The People Go”. And its our song. It’s no one else’s. It belongs to us, and we’ll keep it, thanks.

There is an element of that about the whole of this show. I look round the venue tonight. It’s sold out. And nearly everyone here knows every word of every song. I go to gigs all over the place and for sheer, rabid love for the band there ain’t an audience that touches that of The Wildhearts for the personal connection they have with the music and with the group. That might sound over the top but it is – so far as I can tell – absolutely true. Earth Vs? Nah, we’re all in this together. And that’s why this is so special.