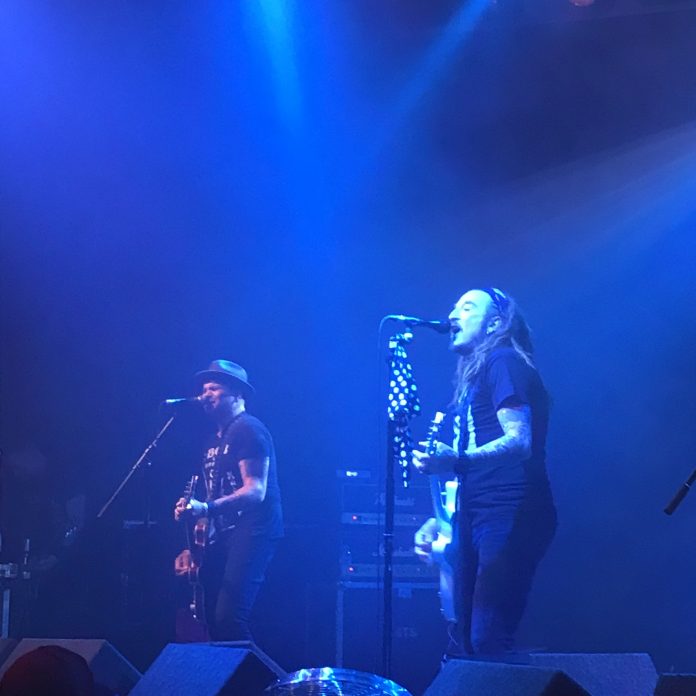 Back in the mid-2000s, like everyone else who liked the music I did, I bought all the Towers Of London singles. The world, at the time, was short on rock stars. We needed them. And ok, pissing off Simon Amstell on “Never Mind The Buzzcocks” wasn’t exactly The Pistols and Reg Grundy, but we were grateful for small mercies. Anyway, 13 years after they burnt bright and faded, ToL are back. And when, in their matching prison style jumpsuits, they announce themselves here with “I’m A Rat” then to be fair, it still sounds fresh and has a whiff of good, old fashioned danger about it. “Beaujolais” likewise, and I can’t be the only one here who hasn’t listened to the Tourette brothers for donkeys years and thinks “blimey, I remember a lot of this.” This is a genuine reunion too, with a new record due. A clutch of tunes are played off it, with “Shot In The Dark” typical, in that it doesn’t mess with the formula too much, but still shows The Rev (who is best known in The Wildhearts circles as the lead guitarist in Hey Hello) is a mighty fine player. “Fuck It Up” is another that has lasted better than it might have done and Towers Of London have enough to look forward to. Older, possibly wiser, but very probably, still with a nose for a scrap. 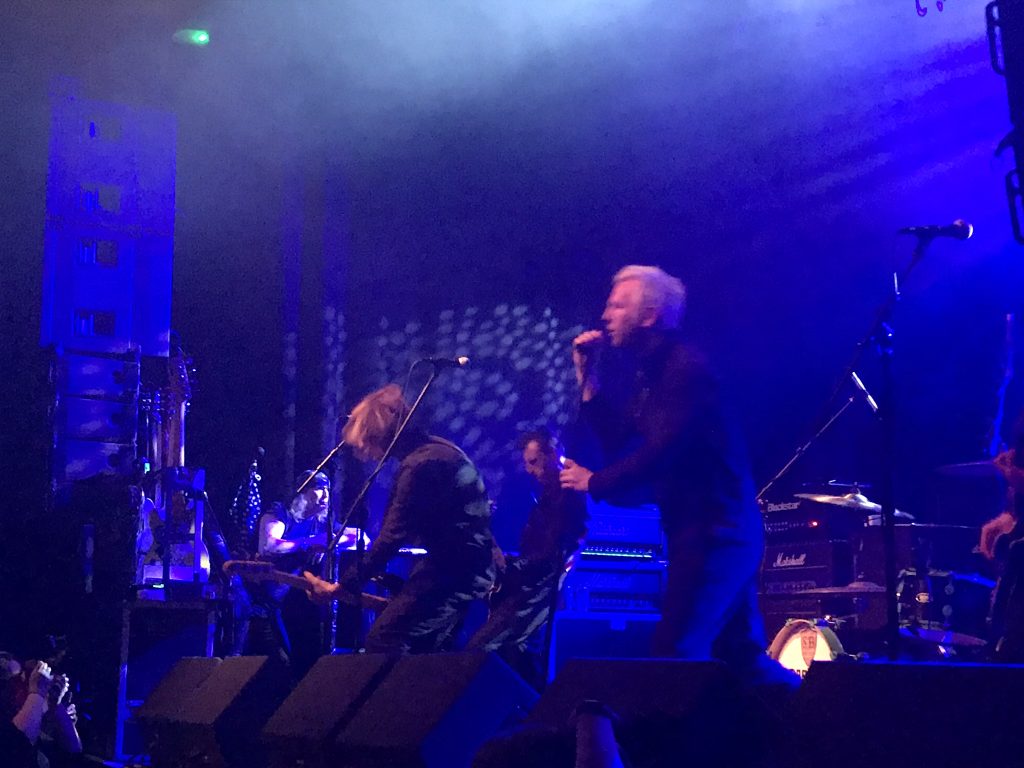 It’s fitting perhaps, that the first time I clapped eyes on Massive Wagons, it was opening for Ginger Wildheart at a solo gig. A big supporter of the band, they’ve written a song about the man himself. “In It Together” will be on their next album, but the rest of the set is jammed full with crackers from the back catalogue. “Back To The Stack” (helpfully rhymes with “maximum attack”) is the perfect intro to MW, and it’s the most no-frills thing you can imagine. “The Ballad Of Verdun Hayes” (maybe the only song in the world about a 103 year old sky diver) is good, but “China Plates” is better still – destroying the falseness of social media friendships in four minutes. “Hate Me” though, could be one belonging to the headliners. “Ratio” is merely another catchy notch in a brilliant canon, and it’s lost on no one that the chorus of “Fe Fi Fo Fum” has the line “I smell the blood of a rock n roll band”. Why? Because so does everyone else. There are bands that say they can’t break through these days. Massive Wagons merely came down from the North, worked harder than everyone else and had superb songs. That’s always been enough. 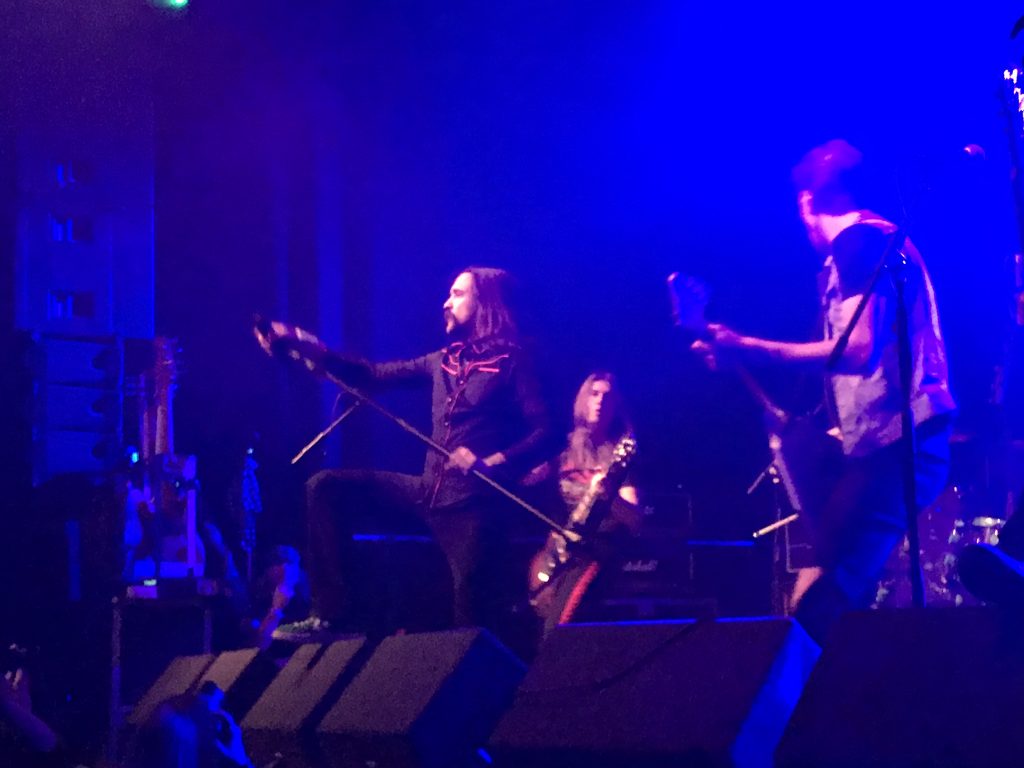 “Ahhh man,” says the aforementioned Mr.Wildheart about halfway through their set.  “It feels good to be on a proper tour instead of one of them ‘anniversary shows’.

And he’s right, too. I mean, who wouldn’t want to watch arguably the finest record ever made, played in order, like I did at Christmas, or a Greatest Hits festival type set from your favourite band, like I did last summer? But there’s something special about this.

This tour comes just as the brand new “Renaissance Man” has crashed into the charts at number 5. Now, the band say they don’t care about such things – and they probably don’t, The Wildhearts have always been a band of the people rather than the accolades – but nonetheless, it is a bit of a lark that our boys, our representatives at the top table, are gratecrashing the land of the trendy, the hip, the autotuned.  Just like when they were on Top Of The Pops back in the 1990s, when they didn’t quite know why they were there, didn’t quite know what to do, but, it was ace.

In the encore tonight, there’s a throwback to that too. They merrily lip-sync their way through the new record’s title track for a new video, because, well, “it’s better to do these things with your friends around….” as Ginger says.

But, before we look back to the past with totally rose-tinted specs, The Wildhearts might be the best band on the planet, but the live shows were often compelling for the wrong reasons back in the day.

It is noticeable that in the last few years there’s none of that, and this is another show from the very top of top drawers. This is a band, it seems to me as a fan of almost a quarter of a century, that they have finally realised their gift, they have finally understood how good they are, just how their music connects and they – at long last – are relishing that.

It is also true to say that go to any The Wildhearts gig these days and the crowd is insane. Tuesday nights are sometimes flat. Not here. It’s sold out and Bristol basically goes all kinds of crazy for an hour and 40 minutes.

A trio of new songs have made the cut too. “Dislocated” with its chorus “I feel dislocated from your world” becoming, oddly, a shared experience, the absolutely raucous “Let ‘Em Go”  – although the vicious catharsis of “Diagnosis” is the pick – but it’s actually some of the others that have been dusted off that most surprise. “The Revolution Will Be Televised” (I was there when that video was filmed too, fact fans), “The Jackson Whites”, “Urge” from the criminally overlooked and utterly brilliant “Endless Nameless” record, “Top Of The World” and “Stormy In The North, Karma In The South” haven’t been heard for ages, and they don’t half sound good here.

There’s the usual classics too. “Vanilla Radio” (the line about “down with the music go-round” is somewhat ironic considering the chart position) “Caffeine Bomb” and all the rest – and any show that includes “Love U Till I Don’t” means I get to hear my favourite song – but they all are injected with a perceptible vigour.

The encore follows a similar pattern. The messed up ending to “You Took The Sunshine From New York” merely proves that one is live and as ever when they play “Mazel Tov Cocktail” you think “crikey that one’s better than I give it credit for”.

“My Baby’s A Headfuck” – the one that started me with the band as I’ve written a million times before – and “I Wanna Go Where The People Go” should end any show, anywhere and basically sound better than any other band and when they take their bows, I am close enough to see their faces and see the look that is genuine and kinda says: “wow.” They know. We always knew.

And now they’re having a renaissance.