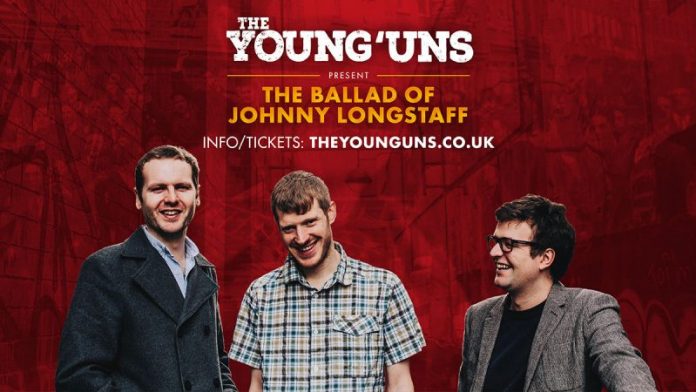 Last year, on their fabulous “Strangers” record, The Young Un’s included two songs that were very pertinent to The Ballad Of Johnny Longstaff. Both, as it happens, are sung tonight.

Little wonder, given “Bob Connney’s Miracle” – the story of starving soldiers in the Spanish Civil War – and “Cable Street” – the story of the famous anti-fascist battle in London, were perhaps the genesis, for the whole thing.

The latter was written through the eyes of a young northern lad who had gone to the capital to find work. That lad was Johnny Longstaff and tonight is 90 minutes, about him yes, but also the wider struggles of the Anti-Fascist movement and the horrors of war.

If that sounds ambitious, it is. And if it sounds like you’d need tremendous talent to even think about it, let alone attempt it then you’d be spot on. The thing is, though, this is the Young’uns. They are without question the finest folk band we have on these shores and not only do they attempt it and pull it off, but they make it immensely compelling in the process.

Partly narrated, both by the band and also by oral testimony from Longstaff himself  – piped in on an old radio – there is an array of slides too. This is not so much a gig as an immersive audio-visual experience.

And yet, it is a gig as well. The harmonies in the trio’s singing are incredible, and when they do use instrumentation, it is always to fine effect. In other hands too, the subject matter might be a little dark, but here they interject with some of their trademark humour – David Eagle provides much of the comedy as ever.

The first half of the show deals with – mostly – Longstaff’s journey, the second with the Spanish Civil War and all its horrors before ending on an upbeat and also poignant note.

Longstaff died at the turn of this century, but his legacy lives on through three gifted musicians from his hometown. Many of the issues raised here are all to prevalent today, but with bands like the Young ‘Uns around then the legend scrawled on the side of the guitar belonging to that other great folk hero, Woody Guthrie, still rings true: This Machine Kills Fascists.

Music can sometimes mean more, it did here. This, though was always about more than mere tunes. And it was stunning.