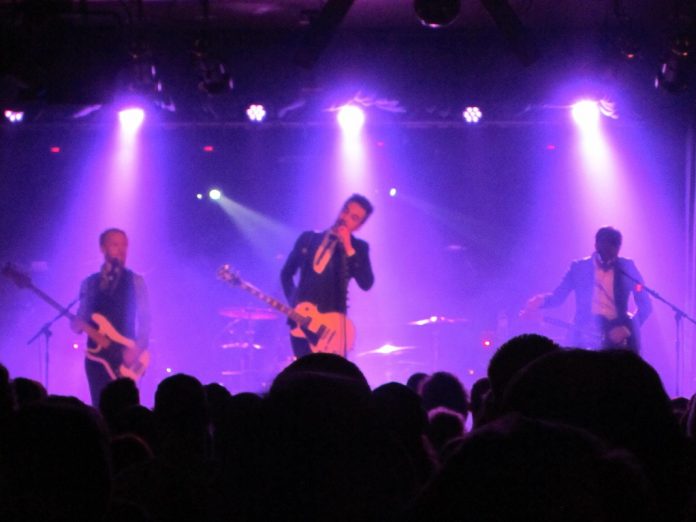 Appropriately perhaps, a fanfare is blasted through the speakers to welcome Royalty, in this case it’s no less than Swedish Royalty in the form of garage rock quartet Royal Republic.

Looking extremely dapper in their suits these boys crash straight into “When I See You Dance With Another”, “Walk!” and the magnificently titled  “Make Love Not War (If you have to make war, make sure you make time to make love in-between)” before they come up for air.

Lead singer Adam Grahn looking like a taller version of Clark Gable, you youngsters will have to Google it, gives us a lecture on love and breaking up and demonstrates this with a one on one, breaking up with Bob, a member of tonight’s faithful.

“People Say I’m Over The top” “Baby”, “Kung Fu Lovin’” follow before sadly it’s time to go and the guys leave us with the final number “Full Steam Spacemachine”.

The good news is that they promise to grace our shores again in the autumn.Royal Republic are a superb fun band but at the same time they have some great tunes to back the showmanship up. I was reminded of Electric 6 and even fellow countrymen The Hives at times but these boys have their own style.

The song ends as out step British Columbians Theory of a Deadman and its straight into opening number “Lowlife.” quickly followed by “Happy”. The near sold out audience go wild.

We get another side of this guy when he shares that although the band have a fair few misogynistic songs, they do have some nice ones as well and they play “All or Nothing”.

“Blow” and the Alice in Chains-esque “Drown” are shared before Tyler talks about the band having their own favourite TOAD song and plays “Santa Monica” to a much appreciative audience.

Another softer tune “Angel” gets the crowd clapping along, a short unnecessary drum solo then the churning “Better Off” is offered up.

“Savages”, “Hurricane”, “Panic Room” swiftly follow before we get what I can only describe as the Stadium ballad in the wonderful “Not Meant to be”  and the throwaway “Hate My Life”.

A brief interlude and the guys return and play snippets of both Lynyrd Skynrd`s “Sweet Home Alabama” and Guns N` Roses “Paradise City” before closing out this 100 minute set with “Bad Girlfriend.”

Five albums down and the guys are promising a visit maybe near year promoting their sixth.This Post-grunge, alternative rock quartet are on the cusp so don’t be surprised to see them at a bigger venue next time.