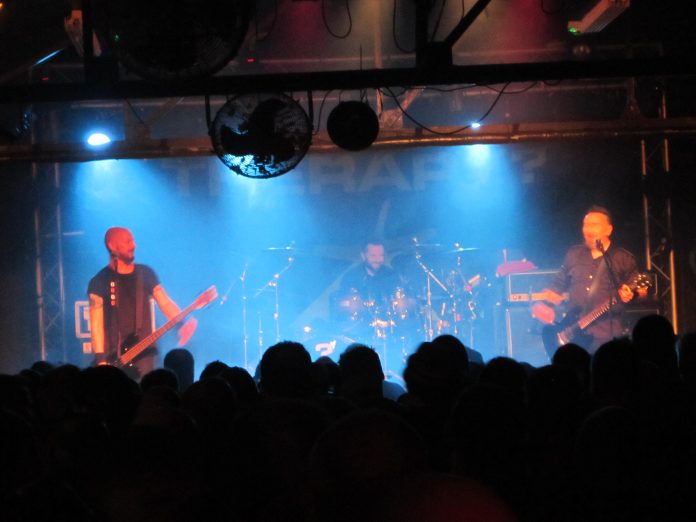 Tonight, sees the Northern Ireland purveyors of Alternative cum Noise Metal, Therapy? hit the UK`s second city on what is the final date of a fourteen-day run of the UK, in support of their well-received 15th studio album “Cleave”. It`s over two years since I last saw Andy Cairns, Michael McKeegan and Neil Cooper who make up this wall of sound and I must say I was really looking forward to it. I do love the band`s self-deprecating humour as Andy relates that the band are happy to be here to play “hit after hit and Motherfucking miss after miss” as they launch into a couple of tracks from the latest release with the unerring `Wreck It Like Beckett` and `Expelled` before sharing a couple of older tracks with `Die Laughing` and`Lonely,Cryin`,Only`

Andy explains that the latest release “Cleave” is about people trying to divide us and push us apart before introducing a couple of cuts from it with `Kakistocracy` with its hypnotic chorus of “It`s ok not to be ok” and ` Callow` a song about mental health. A couple of numbers I really love are shared with `Turn` and `Opel Mantra` before we get the cover of Husker Du song `Diane` then `Trigger Inside` before newish track `I Stand Alone` One of the biggest cheers of the night from this capacity crowd goes up when we are told that the band don`t usually do requests but they`ve had a demand from a Tommy Shelby by order of the Peaky Blinders and launch into the wonderful `Screamager` a thumping aria about unrequited love with the unforgettable opening line of “with a face like this I won`t break any hearts”   `Teethgrinder`, `Potato Junkie` with the immortal line of “James Joyce is fucking my sister” and `Stop It Your Killing Me` close out this uncompromising set. `Potato Junkie` even closes out with a snippet from local boy`s Black Sabbath`s `Iron Man`.

After some energetic encouragement, the band returns and slams into oldies `Church Of Noise`, `Unbeliever` and `Stories` with new song `Crutch` sandwiched in between. We get a short blast of Judas Priest`s `Breaking The Law` before the classic `Nowhere` The show concludes with another definitive mantra with `Knives` before the final cut `Success? Success Is Survival` as the boys take their leave.

Tonight, lived up to all that I expected with Andy`s soaring vocals and guitar licks, the Evil Priest Michael`s grinding, thumping bass and birthday boy Neil`s pounding drum lines, beating the skins within an inch of their lives. A Therapy? show is always a joyous, humorous and physically draining event to be part of and tonight the boys once again delivered in spades.