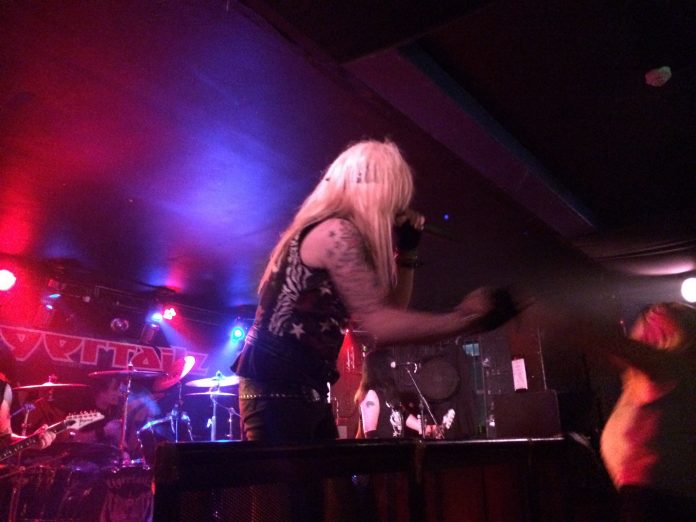 After three. You’re not a lady……

Sometimes, on a Wednesday night in a scruffy arsed part of Birmingham, you have to keep your sense of humour. “Here’s our new one,” deadpans Marc Valentine, singer with one of British rock n roll’s most welcome reformed bands. “It’s an Internet sensation. It’s had 15, no, 16 views on YouTube…..” The song they play is “Glitterball Apocalypse” and even the title says it’s the perfect song for them. Full of glam stomp, rock sheen, a chorus to die for and a hook big enough to stick your coat on, it proves just why it was entirely a good thing that LGD came back a couple of years ago. They had unfinished business, namely a truckload of great songs they hadn’t ever put out, like “Crash Landing In Teenage Heaven”, “Number One Wonderboy” – which is, put simply, the best song that The Wildhearts didn’t write – and “Ashtray Eyes”. They had a great legacy, the unbelievable almost lost classic “Retrosexual” from which the likes of “Far From Home” and “Only Crime” are lifted here, but unlike some who come back, they had a future. They don’t want to rest on laurels, they want to make new music. It’s not just the aforementioned “….Apocalypse”, it’s “White Light Black Heart”, and it’s “Dope School” that ends this 40 minutes. Last Great Dreamers are a very special band, and their forthcoming new album might be one to cherish.

Speaking of keeping a sense of humour……

Tigertailz are coming towards the end of their main set and about to play “Call Of The Wild”. The layout of the Asylum – with the dressing rooms at the other end to the stage and no space at the side of the speakers – aren’t conducive to encores. This causes singer Rob Wylde an issue “We’d normally go off stage here, but there’s nowhere to go…..” He opines. No matter, they just stay up there and crack on. It’s not like they take themselves too seriously anyway. It’s best not to when your bassist is called Bertie Burton and your drummer is called Matt Blakout (MV is going to have a stab that these aren’t their real names).

Such things don’t bother Tigertailz. They have been doing this a very long time. When hair metal ruled the world they came bursting out of the Welsh Valleys looking to take the world on. Fast forward 30 years and there’s one original member – guitarist Jay Pepper – left, but the attitude is still the same. If Motley Crue were the ones they called Dr Feelgood, then these boys are the ones that call you 2am to try and feel you up. It’s riotous, it’s fast, it’s sleazy and it’s absolutely unashamed.

They have a new album out called “Blast” and a track from it is played early. Merrily called “All The Girls In The World” it’s got it’s horns up and a cheery, whoa, whoa hook. And the first few rows play their air guitar, shake their leather clad bootie and lap it up.

They are good at what they do, and savvy enough to mix in some old stuff. “Twist And Shake”, the mighty power ballad “Heaven” (dedicated here to the late bass man Pepsi Tate, who tragically died of Pancreatic Cancer) and the filthy “Sick Sex” are amongst the ones they play from their big 1990 record “Bezerk” and they are rapturously received.

There’s a feeling, however that everyone is waiting for one song. The huge hit, “Love Bomb Baby” which got them on MTV, on the radio and could always get fists pumping. It still does, it ends the set – naturally – and Tigertailz have done their job.

Which is simply this: to entertain the only way they know how. The point is neatly made by an audience member who yells at one point: “it’s 1987!” For an hour and a quarter it really was again. For some, you suspect, it always will be too.