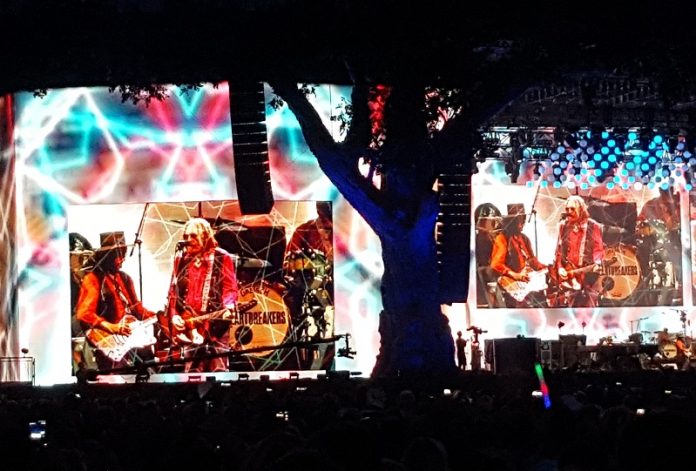 Keith spends the afternoon in a London park

The fact that Tom Petty has only played one very rapidly sold out show, two years ago, at The Royal Albert Hall shows that either he’s not a big fan of touring Europe or that these days he’s simply happy plying his trade in his homeland.

So when it was announced that he was going to headline and close the British Summer Time Festival at Hyde Park this year, my credit card started to twitch because the last time that I saw him was as a fresh faced twenty year old on 22nd December 1982! The deal sealer was the announcement of Stevie Nicks as the main support act. 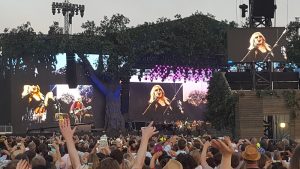 It would be pushing most people’s imagination to compare Hyde Park with 70’s California but on a balmy sunny evening that’s where these two acts have transported us. Walking on stage at the not very rock and roll time of 6.30pm, which plainly caught many fans by surprise, Stevie Nicks scattered her set with five Fleetwood Mac classics as well her own solo hits, of which ‘Edge of seventeen’ still stands the test of time. As she said when she introduced Rhiannon, she never expected to still be singing it 42 years later, but the song and her voice have both aged well.

Tom Petty has a back catalogue that many artists would die for, tagging the show as a 40th anniversary tour gives him scope to delve into most of its eras. Ambling on stage the band opens with Rockin’ Around (With You) to a backdrop of Old Grey Whistle Test clips, the band’s first UK performance. With his long blond hair Tom looked the archetypal surfer dude, but now like many of his fans he’s a grizzled veteran of the music scene.  Mary Jane’s Last Dance gives the crowd its first chance to sing as the hits keep coming. Forgotten Man off the last album shows that not only can be still write quality songs but also that he’s not lost his political bite. Stevie Nicks returns for Stop Draggin’ My Heart Around before he announces a trio from the Wildflowers album and that, unfortunately, is where the show dragged. It wasn’t a bad album but the one hit off it had come earlier in the show and these three just don’t fit into this environment. 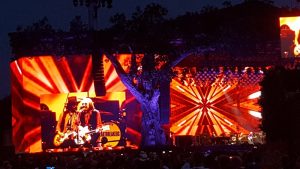 Learning to Fly picks up the tempo as the band heads into the home straight. Refugee brings the crowd back to life and is greeted like a long lost friend. It is the song that made me a fan all those years ago and as darkness falls it sounds as powerful as ever. Ending the first half with Runnin’ Down a Dream they’re soon called back on stage for You Wreck Me before closing the complete circle and ending where his career started with the Byrds influenced American Girl, which the crowd are still singing as they drift out through the exits into the night.

With three of the original band members still with him, Mike Campbell, right hand man with his fedora firmly in place is the virtuoso guitarist of the pair, Tom the more functional of the two. TP&THB have stood the test of time and whilst many of their fans in the crowd might have been with them since the early days, I was surprised to see so many teenagers (sans parents) wearing the band t shirts.

A final comment on how good the sound system was, one of the best that I’ve heard for an open air festival with almost perfect sound/vision synching.