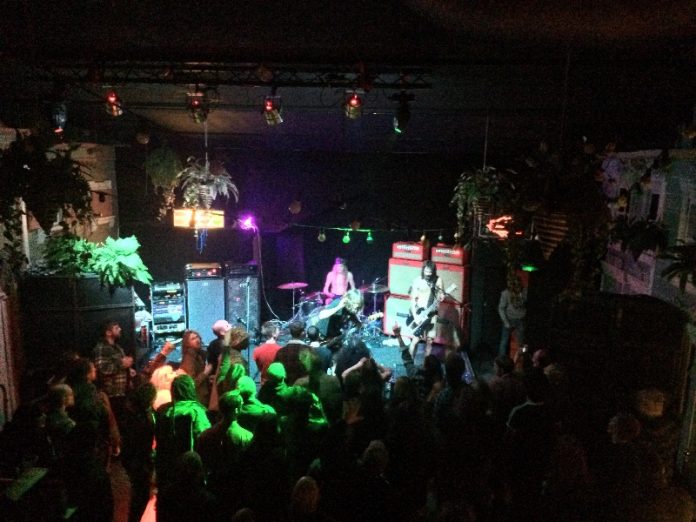 They’ve got riffs, and they know how to use them

Dot Legacy have come all the way from France to……well actually no one can adequately describe what it is that Dot Legacy do. Stoner? Yeah. Fuzz? Yeah. Blues?  Yeah some of that too, and dance. Sometimes in the same song. What we can say for damn certain is the four piece (two of whom are shirtless before we even start, Biffy Clyro style despite the fact its sub zero outside) are full of energy and deliver their unique sonic landscapes with a rare passion. “211” and “3154” – like Karma To Burn, DL view song titles as largely unnecessary – are thumping, strutting and bewildering. “Pyramid” possesses a riff so low that even the depths are scared, and “Cruiser” manages to add some strands to things and is truly baffling. The thing is, though that with Damien Quintard one of the most energetic frontmen around and with Arnaud Merckling every inch his sidekick, then there is some kind of alchemy here that makes it all work. One of those bands you enjoy but don’t understand fully, that is the legacy that Dot Legacy leave here.

More conventional than the openers – but then it is tempting to think that anyone, with the possible exception of Frank Zappa would be – Sweden’s Deville are, as frontman Andreas Bengtsson notes, making their first visit to Birmingham. He might have added the word “physically” because spiritually they’ve been to the second city all their careers. A study in thunderous riffing, this is a sound that owes a lot to that band that formed just up the road and is happy to acknowledge that. But, Deville are exceptional at what they do and merrily prove it here. The title track of their most recent record “Make It Belong To Me” is a real highlight, but its perfectly possible to get lost at any point in any of the grooves – and there are plenty to choose from. Relying on the tightness of their sound to convey their power rather than the visceral energy that went before, this is a half an hour that was more than worth the wait, indeed as the set ends with a pummelling “Rise Above” the overriding thought is that a full tour is surely needed.

Speaking of riffs. Truckfighters haven’t come all the way from Sweden to play acoustics and be introspective. Instead the band that lists its interests on Facebook as “fuzz all round the world” are here to showcase the fact that however good their records are (the answer is very) the only place to see them really do their thing is live onstage. Ostensibly here tonight because the “V” album came out a couple of months ago – and its labyrinthine opening track “Calm Before The Storm” sounds incredible – the trio are really only doing this because they very clearly love playing live. Their 75 minutes (and like the openers bass man Dango and drummer El Danno don’t bother with shirts from the start) is a lesson in how things should get done. Old tunes like “Mexico” mix with new and elsewhere “The Chairman” is turned into a jam that is genuinely hypnotic. There is, though, a real sense of fun about the way the livewire Dango and the more reserved singer Ozo bounce off each other, with the former a real whirlwind. Things come together brilliantly for the last track, and “Desert Cruiser” might just be the best thing played here tonight.

All three bands, though bought their own distinctive elements and sounds to the party, pick your own favourite. Whichever way you choose to look at it, the riffs came thick and fast, and fuzzing hell it was quite a night.