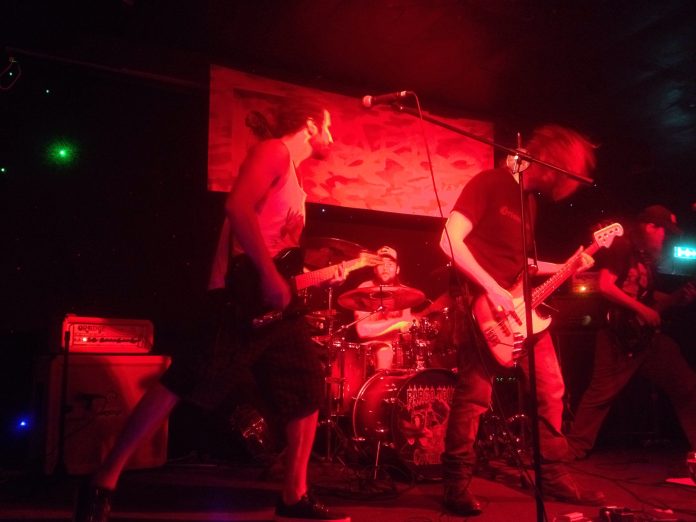 Rugby trio Hanzo promise fuzzy Garage Rock with a surf rock type vibe. They aren’t lying. Songs like “Loose Rope” have got a real pleasing rumble, while closing number “Tarantula” crashes in on a primal wave of 1960s ebullience. A band with only demos to their name right now, but there’s no reason to suppose Hanzo won’t make good on their obvious potential.

“Prepare to be traumatised by what you are about to witness,” says Abomination Federation singer Hayley Button, when most go for “hello”. But a heavy band that comes on like Cathedral in places and Dio in others is not going to cause any nightmares here. When they up the pace Hayley brings a fine range and smiling presence, with the slamming heavy metal behind her doing the job in a mighty way. The Derby based five piece are exactly like one of those bands you’d find on a stage at Bloodstock and love while you watched them. “Drunken” struts about like it owns the place, while “Helm’s Deep” is a classic gallop and “Blood And Thunder” which sees Hayley dueting with bass man Richard Moseley is aptly named. Far from an Abomination and not traumatic in the slightest.

Coventry’s very own Malias were first around 30 years ago, playing this type of NWOBHM when it really was new. Now they are a mix. A melding of the old and the fresh, both in terms of line up and songs. It comes over in the sound too. It’s fair to say “Don’t Need You” sounds like Judas Priest, but there’s a modernity shot through it and while “Lay Down And Die” might take a look through early Iron Maiden’s playbook, it soon moves off into other directions. A thoroughly enjoyable set, but “Stop Falling In Love” – a cruncher of a thing with a hook and chorus many in the 1980s would have sold their souls for – is perhaps the pick.

Line Of Fire begin with the huge riff of “What Will You Say” and don’t let up from there. In fact LoF’s set amounts to one magnificent southern tinged groove after another. Baz Shaw has a wonderfully gritty voice, perfect for this stuff. “Down without the heroin” says their Facebook bio and you can see what they mean, especially on the dark and pounding “Lifetime Alone” which is appreciably their heaviest cut. Their EP, out last year, doesn’t do them justice, as live they really do deliver a superb show, which is never better than the pure, simple and brilliant classic rock of “Something Ain’t Right.” They also go for the blunt and effective visceral anger of “Fuck Me” and the Lynyrd Skynyrd-esque “Wrong Side Of The Tracks” before they close. Line Of Fire, then, bang on target.

There are many ways to skin a stoner cat. The way Master Charger choose to do it is with aggression and power. John Parkin’s sandblasted vocals pierce through and there is a feeling that the Nottingham four piece are merely choosing to restrain themselves when an attack would suit them just fine. It had been obvious from the get-go of “Damn Me Forever” but “The Blessed Be” even ramps that up a notch, while the all out riffery of “So High Yet So Low” is a treat. Tonight marks the first appearance of their new guitarist and is also a chance to try out some new material, and “To Dwell In The Doom” bodes well for the new record, being recorded right now. A trip back to their debut for the title track of “Unity In Black” shows their talents starkly and Master Charger are surely on the ….urmmm charge.

A little earlier in the year, a band from Coventry called Superhooch sent stuff in to MVM. Tonight is our first look at ’em. On appearances alone you would perhaps expect some kind of Dogs D’amour type thing, and certainly singer Johnny Worsley is the most classical frontman we’ve seen in the two days here, but that’s to throw you off the scent. It’s no exaggeration to say there’s a bit of everything here from stoner, to garage to punk. Right from the start of “Cosmic Shotgun” this is a band bursting with energy. The glammed-up stomper of “Remission” soars here, with “Charm Offensive” adding a snotty, sneer for good measure. A band who clearly have many ideas, they also play two songs only recorded this weekend, one of these “Fast Cars And Blank Faces” wouldn’t be out of place on a Hanoi Rocks record. At the moment Superhooch are brimful of passion and it shows, their last tune might be called “Tamed” but you suspect it’s a long time yet before they are. Gloriously unfocused.

Sky Valley Mistress are evidently not short of confidence. Quite simply they say:”we are the best thing you’ve never heard.” Oh, and by the way singer Kayley Davies goes by the nickname “Hell Kitten.” Clearly they’ve not come all the way from Lancashire on a Sunday to mess about. To say they are good would be to insult them. “She Is Go” is an enormous track, but “She’s A Fever” is better still with its slinky, shimmering blues. Comparisons with the likes of Blues Pills are going to come their way and, whilst they are accurate, SVM are perhaps heavier. Davies is a captivating focal point and the young four piece have the potential to match the boasts. “You Got Nothing” for example, leaves a mark many more experienced bands dream of. The best thing you’ve never heard? Possibly. More certain is this: with the retro boom in full swing, Sky Valley Mistress are set for the top.

Last time your humble scribe watched Ten Foot Wizard it was done standing next to Ben Ward, at Bloodstock last year. Sadly, the Orange Goblin leader is conspicuous by his absence this time, but the Manchester four piece get immediate bonus points for using a Cowbell in their opening heavy blues intro. Pleasingly this continues throughout. Notwithstanding MVM’s oft-stated love of the Cowbell, Ten Foot Wizard are a magnificent close to two excellent days of rock. Best described as a Northern take on Clutch, but with ZZ Top’s ear for a good old boogie, “Rise From Your Grave” is like a wrecking ball that won’t be stopped. The boys though, are more concerned with the fact that they met Tony “Baldrick” Robinson this afternoon and dedicating their set to recently deceased wrestler “Rowdy” Roddy Piper. Back to the music, and the spiky “Give Me Your Love” is in fine fettle. When they lock into a groove few can match Ten Foot Wizard for intensity, and the riff is paramount here. The new song they play (title unknown) is a rabble rouser that might have Lemmy licking his lips. Ending their set as only they can with the Caveman strut of the incredible “Covered In Tits,” before an encore of the altogether more serious – but still swaggering – “Medicine,” Ten Foot Wizard are everything you’d want a band to be – and that’s magic.