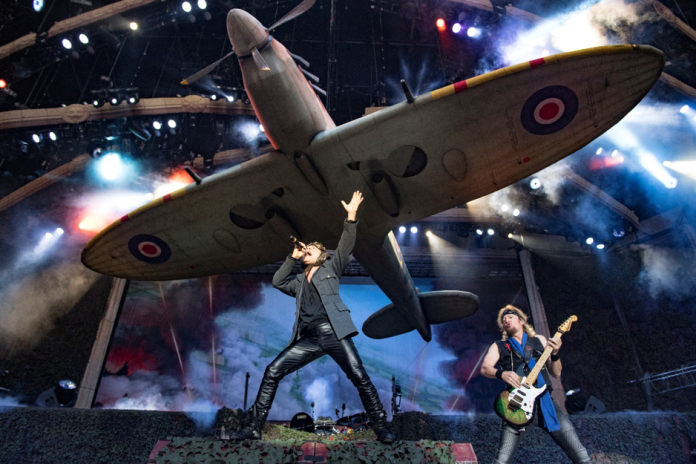 The U.K. leg of IRON MAIDEN’s much vaunted ‘Legacy Of The Beast Tour’ kicks off next week in Newcastle on Tuesday 31st July with a Spitfire buzzing the stage during the opening number Aces High. The plane is a 90% sized replica of an actual Supermarine Spitfire Mk Vb registration number AA 853 from 302 Squadron that saw active duty in 1941.

Says singer Bruce Dickinson,” We would have made it actual size but we had to cut it down by 10% to fit on some of the festival stages, otherwise it’s an exact replica of arguably the greatest plane design ever, in fact one of the best designed machines ever! ”

Since the opening night in Tallinn, Estonia at the end of May, the band has already played to around 750,000 fans in sold-out stadium, arena and festival shows across Europe including selling out the prestigious Atletico Madrid football stadium in Spain last week.

Launching the show with crowd favourite, Aces High, the Spitfire is seen propelling above the stage. But this is certainly not the only show-stopping effect in this theatrical performance with the band then proceeding to race through a spectacular two hours of music, pyrotechnics, special effects and ever-evolving stage sets, including new incarnations of mascot Eddie, and showcasing many of the most beloved songs in their revered career alongside rarely-played classics from their extensive back catalogue. The production and set list were inspired by the Maiden free to play mobile game “Legacy of the Beast” which is available on iOS and Android platforms.

Starting in Newcastle on Tues July 31 the UK tour continues in arenas in Belfast, Aberdeen, Manchester and Birmingham finishing with two nights at The O2 in London on 10th/11th August. Special guests at all U.K. shows are Killswitch Engage.

The shows are all sold out but some Production holds will be released in the days before each show so fans who have missed out are advised to check the box offices nearer to show date.